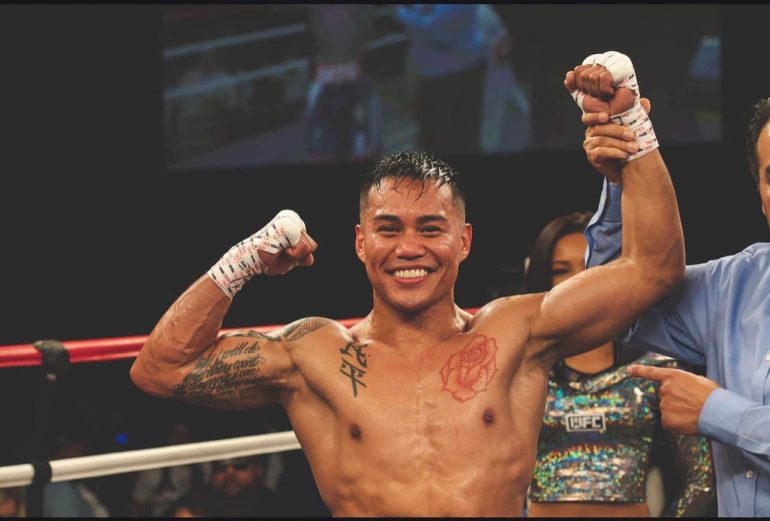 Despite the lopsided scorecards, the fight was competitive, especially during the first half of the fight, as Rizo was the aggressor and forced Dato, who resides in nearby Santa Maria, to fight off his back foot. Towards the end of the second round, a short left hook momentarily stunned Dato. Rizo attempted to follow up, but Dato was able to cover up and hold until the bell sounded to end the round.

Rizo continued closing the distance between the two. He was able to connect with a series of hooks and crosses to the head, but did not commit to working the body in an attempt to wear down the more-mobile Dato.

By the sixth round, Dato was the more-fluid fighter, throwing and outlanding Rizo. Dato was able to mix his attack, connecting hooks and crosses to the head and body of Rizo.

Dato had to deal with swelling above his right eye during the last two rounds. The swelling was caused from an accidental clash of heads or a punch. Despite the swelling, Dato engaged with Rizo in the center of the ring, producing exchanges that Dato had the better of.

“We knew he was going to come forward,” said Dato after the fight. “He’s a good fighter. We had to be smart and box him.”

Dato previously fought on April 1, also at Chumash, stopping former world junior bantamweight titleholder Rodrigo Guerrero in the fifth round. The Filipino-American suffered his first defeat as a pro in August 2021, losing to Angel Contreras by unanimous decision.

The 26-year-old Rizo, who resides in Santa Paula, California, drops to 12-2, 12 KOs. Rizo made his U.S. debut against Dato after having fought all of his previous fights in Mexico.

Junior welterweight Angel Flores of nearby Buellton dropped Andrew Rodgers three times en route to a knockout win in the eighth round. Flores improves to 9-1, 7 KOs.

Flores dropped Rodgers with a left hook to the head during the first round and again in round 6 with a right hand to the head. Rodgers looked out on his feet, but the round sounded to end the round.

Rodgers was game, but was staggered against the ropes during the early moments of the eighth round. Flores followed up with a combination, dropping Rodgers to the canvas. Rodgers did not look visibly hurt, but referee Jack Reiss stopped the bout at 47 seconds.

Middleweight Noel Cavazos of Ventura defeated Bryan Martinez (2-4, 1 KO) by split decision. One judge scored the bout 39-37 for Martinez, while the other two judges scored the bout 40-36 and 39-37 for Cavazos, who goes to 2-0.