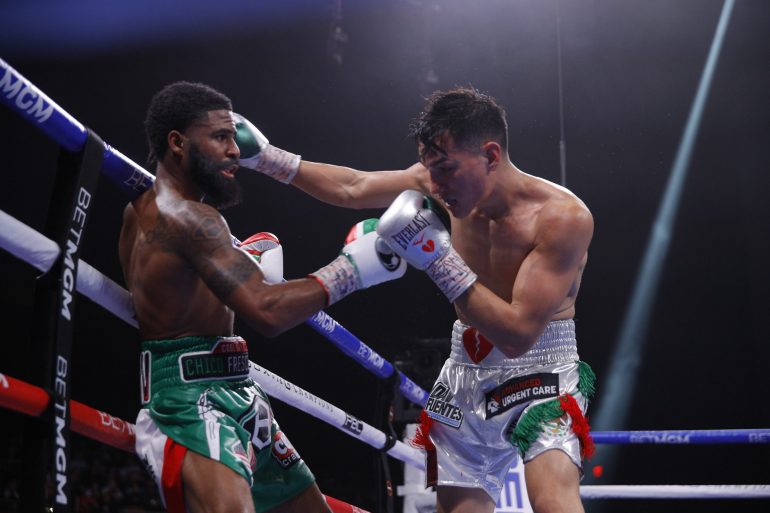 Figueroa was non-stop aggression and pressure but Fulton stood his ground. Photo by Esther Lin/SHOWTIME
12
Jan
by Francisco Salazar

The rematch between Stephen Fulton and Brandon Figueroa will likely take place on February 25. Former ESPN senior boxing writer Dan Rafael was the first to break the story.

The 12-round bout will take place at The Armory in Minneapolis, Minnesota and will headline a three-bout Showtime Championship Boxing telecast. Both will be fighting for the vacant WBC interim world featherweight title.

In their first fight, which was a world junior featherweight unification fight that took place in November 2021, Fulton won by majority decision in an action-fight. With the win, Fulton successfully defended his WBO world title and won Figueroa’s WBC world title.

There had been talk of Fulton facing Ring Magazine and undisputed bantamweight champion Naoya Inoue when the unbeaten star from Japan moves up to 122 pounds. No word if Fulton would stay at featherweight, regardless of the result in the Figueroa rematch, or move back down to junior featherweight. He is currently ranked No. 1 by The Ring at 122 pounds.

Figueroa (23-1, 18 KOs) made his debut at featherweight in his last bout on July 9, stopping Carlos Castro in the sixth round. The 26-year-old from Weslaco, Texas has knockout victories over Luis Nery and Damian Vazquez.

In the co-feature, which was reported by The Ring and other publications, Subriel Matias of Puerto Rico will face Argentina’s Jeremias Ponce for the vacant IBF world junior welterweight title.

The Matias-Ponce fight was originally penciled to take place on February 11 at the Alamodome in San Antonio, Texas as the co-feature bout to the WBC world junior lightweight fight between Rey Vargas and O’Shaquie Foster.

Ring Magazine junior welterweight champion Josh Taylor vacated the IBF title in August after stating he was focused on a rematch against Jack Catterall. The IBF has ordered Taylor to make a defense of the title belt against Ponce, who is the mandatory challenger.

Ponce (30-0, 20 KOs) stopped Lewis Ritson in the 10th round in June 2021 in his most notable fight, on paper, of his pro career. He has stopped four of his last five opponents.

In the opening bout of the Showtime telecast, an intriguing clash of once-beaten junior welterweights will take place between Elvis Rodriguez (13-1-1, 12 KOs) of the Dominican Republic and Allentown, Pennsylvania’s Joseph Adorno (17-1-2, 14 KOs).