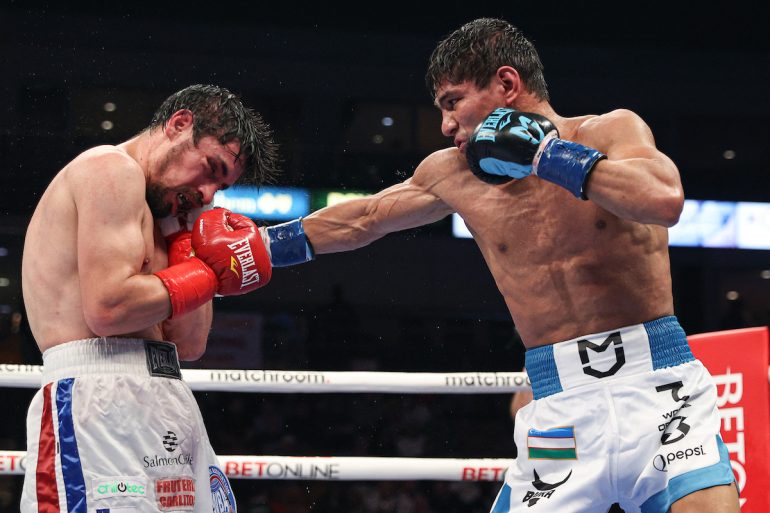 Akhmadaliev (11-0, 8 knockouts), who is co-promoted by World of Boxing and Matchroom, will face his Filipino opponent at a venue to be announced in the United States at the beginning of April, most likely on DAZN.

Akhmadaliev, who is rated No. 2 by The Ring at 122-pounds, was a standout amateur, winning bronze at the 2016 Olympics before seamlessly transitioning into the pros. The dynamic Uzbekistan southpaw edged the more experienced Daniel Roman (SD 12) in early 2020 to become the IBF/WBA 122-pound titleholder.

The 28-year-old has made three successful defenses including a homecoming against former IBF titlist Ryosuke Iwasa (TKO 5) and, more recently, a stoppage over Ronny Rios (TKO 12). However, a broken hand meant MJ has been on the sidelines since last June.

Tapales (36-3, 19 KOs), who is rated No. 5, worked his way up through the ranks in the Philippines and scored wins over countrymen Randy Petalcorin (TKO 2) and Warlito Parrenas (TKO 7). Narrowly lost to David Sanchez (MD 12) in Mexico, but upset unbeaten Shohei Omari (TKO 2) in a WBO bantamweight title eliminator in Japan.

The 30-year-old headed to Thailand and twice got off the canvas to stop Pungluang Sor Singyu (TKO 11) to pick up the WBO 118-pound title. In his first defense, Tapales headed back to Japan to face Omari in a rematch. Although he missed weight and was stripped of his title, he was able to stop Omari in the 11th round. Over a year of inactivity followed, but Tapales returned with two wins before losing to Ryosuke Iwasa (TKO 11) in an IBF 122-pound title eliminator. He’s back on track with three wins including an impressive stoppage over Hiroaki Teshigawara (TKO 2).

Several of Akhmadaliev’s stablemates will also be in action in the coming months.

No. 8 ranked Ring junior middleweight Israil Madrimov (8-0-1, 6 KOs) will also be back in action in the spring, possibly on the same card as Akhmadaliev.

Power-punching junior lightweight Elnur Abduraimov (10-0, 9 KOs) will return in the next month or so.