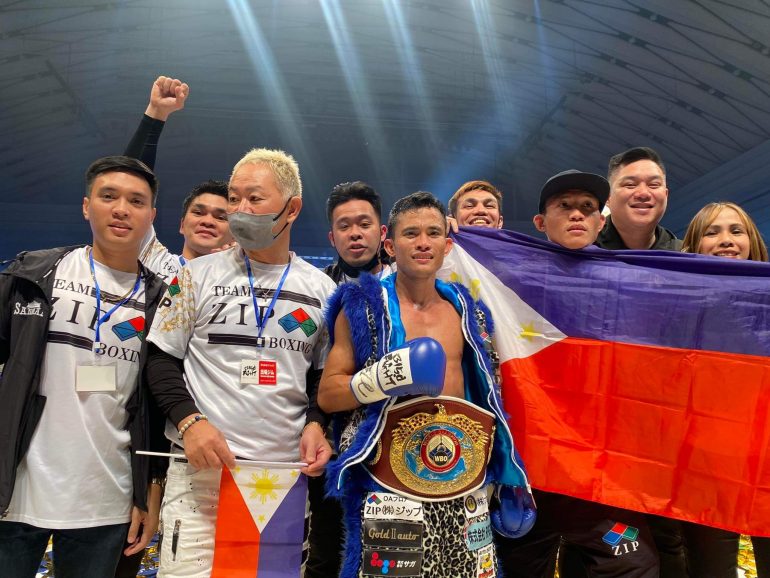 Jerusalem (20-2, 12 knockouts) made good in his second crack at a world title, vaporizing the Japanese incumbent with a single right hand to the chin to bring the bout to an end at the 1:04 mark.

“This victory is for the Philippines and for my family,” said Jerusalem, 28, who is promoted by Zip-Sanman Promotions and trained by Michael Domingo. “I will not stop training hard after this.”

The win was the ninth straight for Jerusalem of Manolo Fortich, Bukidnon, Philippines. Jerusalem showed championship potential in his first world title opportunity in 2017, pushing Wanheng Menayothin to the brink in a close decision loss for the WBC strawweight title in Thailand, but suffered another setback in his next fight, dropping a decision to fellow Filipino Joey Canoy.

Jerusalem was unrated by the The Ring at 105 pounds heading into the fight, while Taniguchi (16-4, 11 KOs) was rated no. 3 after stopping Wilfredo Mendez in 11 rounds 13 months ago to win the title, and making one successful defense against an overweight Kai Ishizawa last April.

The news is a welcome change in fortune for Philippine boxing, which endured a parade of setbacks in 2022 after Mark Magsayo, Jerwin Ancajas, Rene Mark Cuarto and John Riel Casimero all lost their world titles, leaving the Philippines without a champion.

Earlier in the night, Daniel Valladares (26-3-1, 15 KOs) retained his IBF strawweight title after his fight with Japanese challenger Ginjiro Shigeoka (8-0, 6 KOs) ended in a no contest due to an accidental headbutt in round three. All three judges scored the fight 19-19 when the fight was stopped at the 2:48 mark. Valladares, 28, of Monterrey, Mexico was making the first defense of the title he won by split decision in July against Cuarto, whom he is expected to fight again this year.