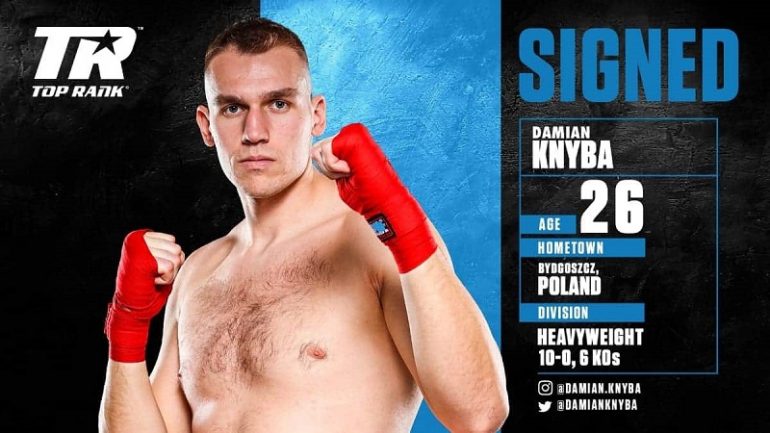 Knyba (10-0, 6 knockouts) most recently fought on December 10 on the undercard of the Teofimo Lopez-Sandor Martin fight, at Madison Square Garden, in New York City. Knyba, who stands 6-foot-7 and has an 86-inch reach, stopped Emilio Salas in the second round.

The stoppage over Salas earned Knyba a promotional contract and the distinction of becoming the first Polish heavyweight to be signed by Top Rank.

Knyba is scheduled to return to action on a to-be-determined card in April.

“Damian Knyba is a supremely talented heavyweight and he is already a fan-favorite among the passionate and knowledgeable Polish fans,” said Top Rank chairman Bob Arum. “I expect Damian to take a big leap forward in 2023.”

The 26-year-old was very busy in 2022, fighting six times, with half of the fights taking place in the United States and the other half in Poland. He hopes to stay busy and continue improving his skill-set for bigger opportunities down the line.

“I’m looking to follow in the footsteps of Andrew Golota, Tomasz Adamek and Adam Kownacki,” said Knyba. “With all due respect to those who paved the way, my dream is to surpass them and become the first Polish heavyweight world champion. I know there is a long road ahead of me and I am ready for this journey.

“This is another milestone I’ve hit with my team, including my manager Lukasz Kownacki. With Top Rank behind me, the sky’s the limit.”

Knyba made his professional debut in June 2021, stopping Petr Frohlich in the second round.