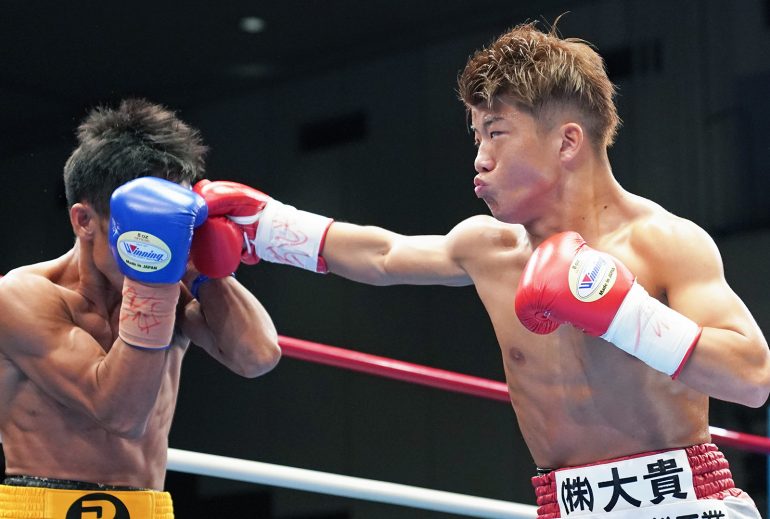 Ginjiro Shigeoka unleashes on Clyde Azarcon, who was knocked out in the first round in July 2019. (Photo by Naoki Fukuda)
03
Jan
by Anson Wainwright

Before he even made his professional debut, Ginjiro Shigeoka had already been anointed as a future world champion. Those in Japanese boxing circles knew they were witnessing something special when he was still a teenager in the unpaid ranks.

On January 6, Shigeoka will get the chance to fulfill those lofty expectations when he challenges IBF strawweight titlist Daniel Valladares at the EDION Arena in Osaka.

Shigeoka claimed five national titles as an amateur and only lost once in 57 contests, and even then it came with mitigating circumstances. He had been due to face his elder brother, Yudai, in the final of the Kumamoto prefecture final, but both brothers, their father and their coach agreed that the bout should not take place, and it was decided that Ginjiro would not fight. As soon as the opening bell rang, his corner threw in the towel.

After turning professional in September 2018, Shigeoka began his march toward the world title (Read New Faces: Ginjiro Shigeoka). However, when the COVID-19 pandemic hit, it greatly impacted his development. His team was unable to bring boxers from abroad, and other Japanese fighters were reticent to face their uber-talented countryman.

The now-23-year-old southpaw, who is rated No. 8 by The Ring at 105 pounds, welcomes the opportunity to fight for his first world title.

“I am very excited that the moment I have been waiting for, to make my dream [happen], is finally about to come,” Shigeoka (8-0, 6 knockouts) told The Ring through Hank Hakoda.

“I give credit to the way [Valladares] infights; he is a good infighter. However, I am confident that I can do better than him in any possible situation.”

Shigeoka’s handler, Hitoshi Watanabe, also works with Shigeoka’s aforementioned brother and WBO 105-pound titlist Masataka Taniguchi, who will defend his title on the same card. He had to carefully plot the best and quickest way for his fighter to fight for a world title.

“Although it’s such a first-world problem for me, we have a world champ Taniguchi and Ginjiro in the same weight class and in my gym,” Watanabe explained. “I won’t make the world title fight between stablemates happen, no matter what. 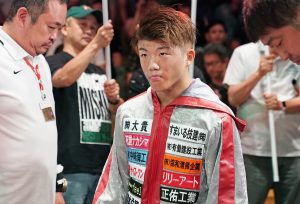 “Ginjiro was the top-ranked contender of WBC; I expected he would get a world title opportunity and it would be available for him as a mandatory challenger automatically, or easily at least, without any additional bouts. However, it didn’t go that way. It appears that he was supposed to fight an elimination bout in advance of his WBC world title attempt in accordance with the basic rule.

“During the process, it turned out that WBA champ [Knockout CP Freshmart] and WBC champ [Petchmanee CP Freshmart] share the same manager, which made our negotiations further complicated. We even considered the pursue bid [to fight in Thailand]. After this confusion, we finally reached our conclusion to fight IBF champ Valladares.

“It does not matter for us which of us fights the world title attempt earlier,” said Ginjiro. “There’s no significance at all, unless we both become world champions. That’s our mutual understanding and shows how we think, and we have no other option.”

Nobody is better suited to speak about how good Shigeoka could be than Mr. Watanabe.

“I firmly believe he will win this bout, but I want to focus on this big, door-opening, important fight,” said the promoter. “Nothing about his future plans has been decided, and everything is on the table. He deserves higher stages. It will be an exciting year for him, extending his unbeaten record in boxing no matter whom he fights in an impressive fashion.

“I can’t help thinking Ginjiro is an exceptional talent across all the athletes of other sports. During the press conference of this bout, he told me he had never taken his opponents lightly so far in his entire career — which I like about him, and [it impressed me about him] the most. He has been fighting for a long time, since he was little, practically with no loss up to now, while every great fighter experiences losses. Valladares had three defeats in his professional career so far, and I just can’t imagine that a fighter who lost three times can beat Ginjiro.”

Ginjiro is more blunt in describing his intentions.

“I will beat all the champs in strawweight,” he said.

Valladares (26-3-1, 15 KOs), who is rated No. 6, won his first 11 fights before being out-hustled by journeyman Genaro Rios (MD 8). He rebounded to score a pair of impressive wins over former WBO strawweight titlist Merlito Sabillo (TKO 7) and the previously unbeaten Christian Araneta (TKO 4).

His fight with then-IBF beltholder Pedro Taduran was action-packed until Valladares was cut and the contest ended in a technical draw. The 28-year-old then stumbled, losing back-to-back fights, before righting the ship and edging past Rene Mark Cuarto (SD 12) to claim the IBF title in July 2022.