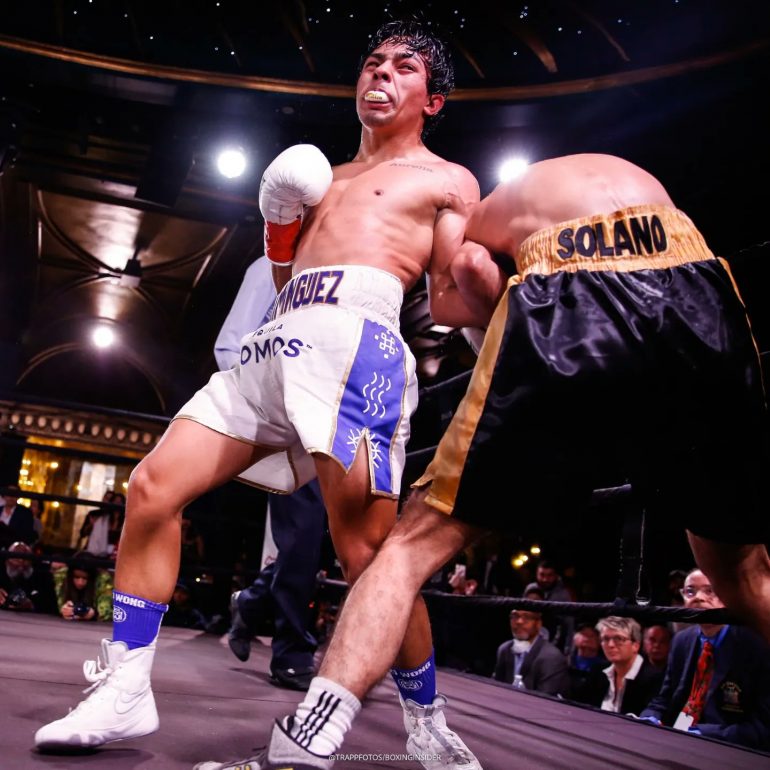 NEW YORK — Andy Dominguez has a dilemma. As a flyweight boxer who was raised in New York, there is an extreme scarcity of opponents his size in the geographical region where he fights. As a result, the 24-year-old Mexican-American is almost exclusively fighting much larger opponents whose size can compensate for their disparity in skill.

Dominguez found himself in a real fight Wednesday night against the more experienced and comically larger Marvin Solano, but managed to outfight him to an eight round unanimous decision at Sony Hall in New York City. One judge had it close at 76-75, while the other two scored the bout 78-73, all to Dominguez (9-0, 6 knockouts), who was raised in The Bronx but now lives and trains in Las Vegas under Ismael Salas.

From the opening bell, it was clear that Solano held the physical attributes to give Dominguez issues. At about 5’8”, the 32-year-old Nicaraguan fighter had about 5 inches in height on Dominguez. Solano, who had fought as a bantamweight in his previous three bouts, looked far more natural at 114 pounds than Dominguez did at 113.75 pounds.

Solano found a home for his straight right hand and uppercuts in the early rounds, catching the wild-swinging Dominguez coming in. Dominguez, who had a 59-bout amateur career, was reduced to wild swings from the outside to close the gap. The bout began to turn in round 4, when Dominguez hurt Solano to the body with a left hook. Dominguez made the adjustment of shifting angles in close, particularly in the sixth, when a step to the left enabled him to land an overhand right, followed by a left hook and another overhand.

The fight began unraveling for Solano in the eighth, when his exhaustion brought his frustrations to the surface. Solano, who fell to the ground several times in the round, was penalized a point for hitting Dominguez on a break. A less lenient referee may have also given Solano a count in the round after several punches preceded one such tumble to the canvas, but Dominguez didn’t need the additional points.

The fight headlined a five-bout card from Boxing Insider Promotions, and is the second show that the boxing news outlet turned promotional company has hosted.

She found out just how deceiving that record was, as Smith pulled off the upset with a unanimous decision win in the eight-round junior bantamweight fight. Two judges scored the fight 79-73, while the third had it 77-75, all for the Dallas, Texas-based Smith, who evened her record at 6-6-2 (1 KO) with the win.

Smith, who was much shorter than Urbina (13-3-1, 2 KOs) at 5-foot tall, never relented in her pressure from the opening bell, powering through the guard of the rangier, more refined Urbina with wide swings that reddened Urbina’s face early on. Urbina began to try to assert her range in the second, but couldn’t keep Smith off of her with her counter-punching.

Urbina began to get her rhythm going in the fourth, but her cause was hampered by a bad cut on her right eye lid in that round. Urbina seemed to abandon the boxing route from that point on, hoping to land a counter that would earn her some respect, but found herself outworked by a fearless opponent.

The win was the latest upset for the 26-year-old Smith, who had previously spoiled the unbeaten record of Ashley Sciscente, and pushed former amateur standouts Christina Cruz and Gabriela Fundora in decision losses.

Urbina, 32, of Phoenix, Arizona by way of Hermosillo, Mexico, sees her plans of reinventing herself in the 115-pound division derailed for the moment. The former amateur standout had been undefeated in her first 13 bouts, but lost back to back decisions to Marlen Esparza and then-WBA flyweight titleholder Naoko Fujioka, and is now 1-3-1 in her last five bouts.

In the co-feature bout, a popular local attraction had to dig deep to keep his momentum going, with Nadim Salloum prevailing over Decarlo Perez by majority decision in an eight-round super middleweight bout.

Salloum (10-1, 4 KOs) of Brooklyn, N.Y. by way of Jounieh, Lebanon thrilled his sizable crowd, showing he had more ability than your standard ticket seller, landing hard combinations to the body and head. His power was diminished some by hand pain in the bout, and Perez showed enough determination to press forward for the entirety of the night.

Anthony Sims Jr. (23-1, 20 KOs) made a successful ring return after a year away, dominating Antonio Todd (14-7, 8 KOs) to a unanimous decision win. Two judges scored the middleweight fight a shutout at 80-72, while the third had it 79-73. Sims, 27, of Los Angeles by way of Indianapolis has now won three straight since his lone defeat, a split decision to Roamer Alexis Angulo in 2020.

Alejandro Luis Silva opened the event with a bang, knocking out Issa Samir in the first round with a single left hook to the body in their eight-round junior middleweight bout. Silva (20-0-1, 14 KOs) of Buenos Aires, Argentina made the most of his first fight on U.S. soil, stalking the Ghanaian boxer, who never got going before the fight ended. Silva, 29, is now based in Las Vegas and has won 18 straight since his lone blemish, a four-round draw in his third bout.