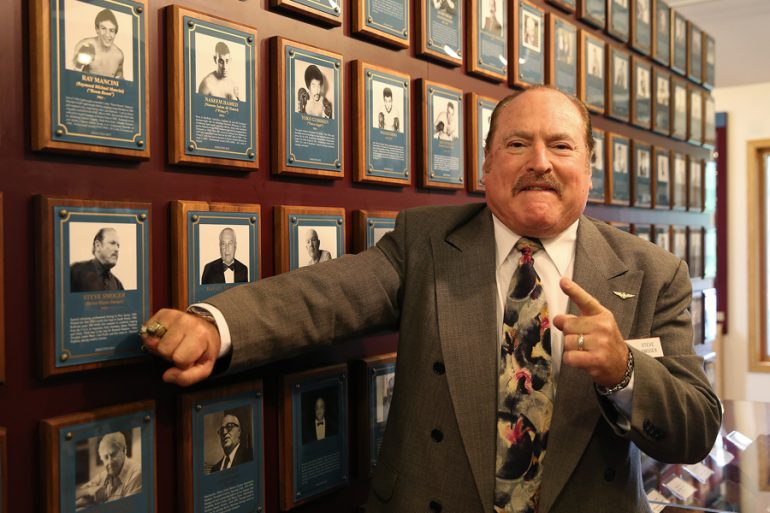 Steve Smoger at the International Boxing Hall of Fame.
19
Dec
by Ryan Songalia

Steve Smoger, the International Boxing Hall of Fame inducted referee, has died Monday at the age of 72.

Pennsylvania based promoter Russell Peltz made the announcement on Twitter, stating that Smoger had passed after a long illness.

He began making his name in the sport in 1978 as an inspector for the New Jersey Boxing Commission, and began working as a referee in 1984. He kept busy working the fights during the heyday of Atlantic City boxing in the 1980s, and refereed his first world title fight in 1986, when Jong Kwan Chung defended the IBF flyweight title with a majority decision over Bi Won Jung.

Over the years he has worked a number of notable fights, including Bernard Hopkins vs. Felix Trinidad, Kelly Pavlik vs. Jermain Taylor, James Toney vs. Mike McCallum I, Andre Ward vs. Carl Froch and many more in his over 200-world title fights.

He last worked as a boxing referee in 2018, when he refereed a four-round majority draw between Rome Cruz and Jose Lopez in Philadelphia. His last fight judged was a year ago, when he worked a card in New Hampshire in November of 2021.

Smoger was inducted into the International Boxing Hall of Fame in 2015. He was also a member of the Atlantic City, New Jersey and Pennsylvania Boxing Halls, as well as the Philadelphia Sports Hall of Fame.

Peltz says sympathy cards can be sent to the Smoger family at 8 South Cambridge Avenue, Ventnor, N.J. 08406. No funeral arrangements have yet been announced.