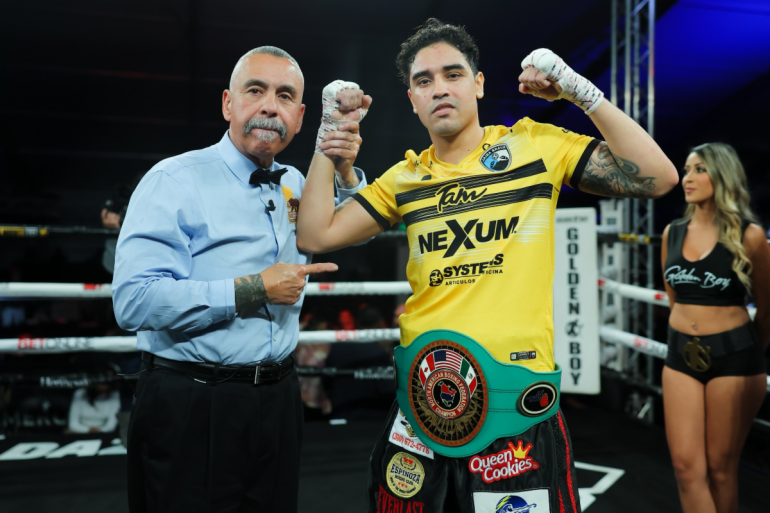 Welterweight prospect Raul Curiel made quick work of Brad Solomon, stopping the veteran gatekeeper in the second round of their scheduled 10-round main event on Saturday at the Commerce Casino in Commerce, California.

A stiff jab followed by left uppercut that landed right on the nose of Solomon sent the 39-year-old former contender to his back. Referee Ray Corona reached a full 10 Count as Solomon (29-6, 9 KOs) struggled to get to his feet.

With the victory, which topped a Golden Boy Promotions “Fight Night” card streamed live on DAZN, Curiel (12-0, 10 KOs) extends his knockout streak to six consecutive bouts. The 27-year-old boxer-puncher from Tampico, Mexico had been out of the ring for a full year prior to Saturday’s bout, but didn’t appear to suffer from any ring rust given his aggression, confidence and punch-accuracy from the opening bell.

The Freddie Roach-trained former amateur standout looks ready to step up his competition in 2023.

On the undercard, former junior featherweight contender Diego De La Hoya (24-1, 12 KOs) scored an eight-round technical decision over Jose Gonzalez (23-11-1, 13 KOs) when an accidental clash of heads opened a bad cut over the right eye of the Mexican veteran. De La Hoya, who fought at junior lightweight but might drop down to featherweight in 2023, scored knockdowns in Rounds 3 and 5.

Super middleweight prospect Aaron Silva made his Golden Boy promotional debut a successful one by scoring a fifth-round stoppage of Alan Campa. Silva (11-0, 8 KOs), a 25-year-old pressure fighter from Monterrey, Mexico, dropped the battle-tested Campa (18-7, 12 KOs) twice in Round 5. Referee Sharon Sands waved the bout off after the second knockdown at 2:34 of the round.

Lightweight prospect Jousce Gonzalez remained unbeaten but had to dig deep to outpoint Ivan Cano over 10 tough rounds. Gonzalez (14-0-1, 12 KOs) won by scores of 97-93 and 98-92 (twice) but Cano (26-11-2, 16 KOs), a well-traveled 35-year-old journeyman who fought Jorge Linares for the WBC title in 2015, had his moments, especially in Round 6 when he repeatedly nailed the 27-year-old up-and-comer with right hands. The DAZN commentary duo of Bernard Hopkins and Beto Duran thought the scorecards could have been closer.

And in a battle of unbeaten prospects, Angel Vazquez handed Nick Sullivan the 24-year-old Virginian’s first pro loss. Vazquez (12-0, 6 KOs), a 22-year-old slugger from Sonora, Mexico, was docked a point by referee Sharon Sands in Round 5 for holding but was awarded an “iffy” technical knockdown when Sullivan (6-1, 1 KO) stumbled into the ropes after taking a cuffing punch. Vazquez won by unanimous scores of 57-55.