It’s not the end of the road, says Josh Warrington 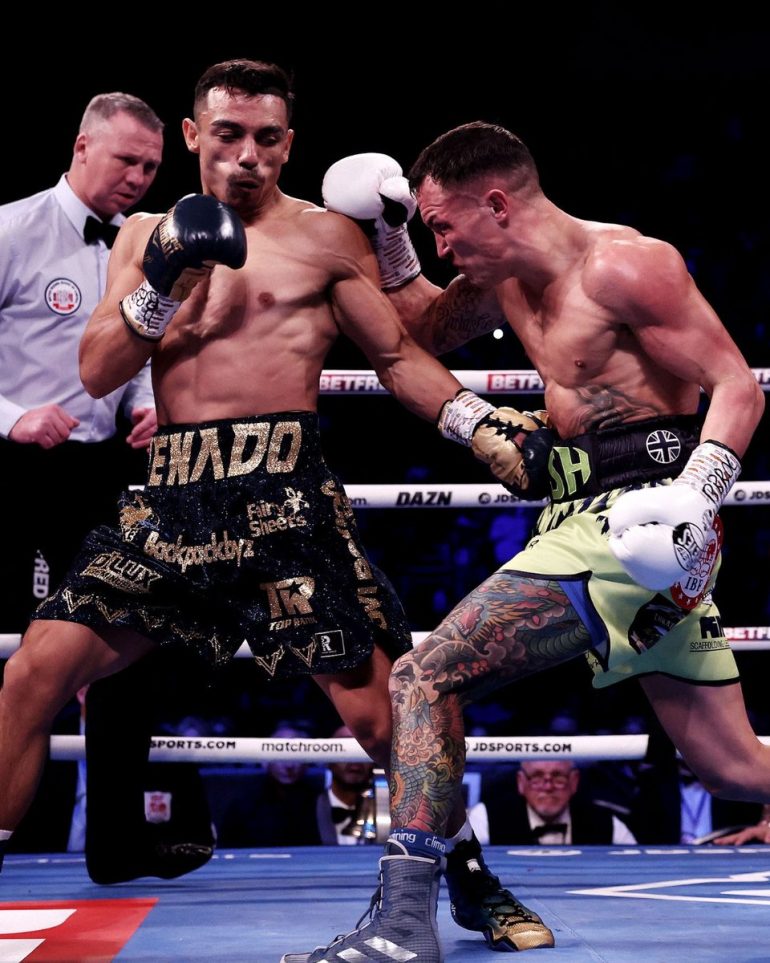 Lopez and Warrington go at it. Photo by Mark Robinson Matchroom Boxing
15
Dec
by Tris Dixon

Josh Warrington is having to settle into life as an ex-champion once more, and it’s not easy.

The popular Leeds warrior is licking his wounds after losing his IBF featherweight title to Luis Alberto Lopez last weekend. He’s spending time with his wife and young twin daughters, and that is soothing the heart that still aches for the biggest nights in boxing, even if they now seem farther away than before.

“A few days later, you realise you’re crushed,” Warrington lamented. “Inside, it really hurts, you close your eyes at night-time and it hurts, you wake up in the morning and it’s another day. Life doesn’t stop, does it?”

Warrington now needs to be a dad to the girls and make sure they enjoy Christmas with their father and hero. But despite the loss, there is hope. All is not lost. Warrington and Lopez shared a good battle, and Warrington’s bargaining power for big fights is now depleted so the showdowns he craves could actually move closer.

“It’s funny how it happens,” Warrington admitted. “You get to a stage where you think it’s gone and you say ‘bye bye’ to all those opportunities, but all of a sudden, doors open, and it’s a weird thing. I look back with the two [Mauricio] Lara fights and after that, an opportunity came up against Kiko Martinez.”

Had Warrington got the decision against Lopez, he feels almost certain a unification fight or a contest in America – one he’s always wanted for his fans – would be next. “But all of a sudden, it’s still not dead,” the 32-year-old continued, hopefully. “It’s still alive, so that’s a positive to take. One thing I realise is if you do get to world level and you’ve had many world title fights, you’re kind of always in that mix.”

Warrington hasn’t watched the Lopez fight back yet. Emotionally, he’s too raw, but he knows he’s disappointed in himself for starting too slowly.

“People may say, ‘You had a hell of a fight,’ ‘kudos to Lopez for making it an awkward fight,’ ‘you finished strong,’” Warrington reasoned. “But my disappointment is how slow I started. It’s like I was anxious. You can say, ‘maybe Lopez made you that way,’ but I don’t agree with so much of that. I was being too cautious… even in quiet spells when I’d normally think, ‘Now it’s time to work.’ By the time I got half way through and I did start working, I made it a lot easier on myself.”

And that is what he’s been working on behind closed doors with his father and trainer Sean O’Hagan, to make sure he got it right for Lopez. But when the bell went on Saturday, Warrington didn’t come out of the blocks as he usually does.

“All I’ve done through this camp is establish the jab, it’s almost like I could see it tattooed on the inside of my eyelids,” Warrington added. “I could hear my dad say, ‘Establish that jab, get that jab working, you can win rounds with that jab,’ and there were some rounds when I hardly threw the jab. The annoyance comes from the things I didn’t do, and waiting too long to get going with it… because once I started doing everything we’d been working on for the last 12 weeks, I made it easier.”

Lopez is with Top Rank and Warrington is with Matchroom. Lopez was a mandatory challenger and there is no rematch clause. “That’s the sticky part of the game,” Warrington explained, talking about the politics of this sport. “I don’t think he’s going to be quick to rush into a rematch.”

Warrington has again come out of a contest being accused of using his head to gain an advantage. Lopez was cut by the left eye following an accidental headclash in round two, and Warrington has heard the allegations about how free he is with his head.

“But I’m a fighter who goes forwards and keeps his chin down,” Warrington said. “When fighters go together, sometimes there’s a clash of styles. My head was just as swollen [afterwards], that swelling on my head has just gone down. I’ve come off with an injury from the headclash. It happened very quickly, there’s nothing I could have done about that. He dived in, I had my chin down and that was that. Nothing intentional. Because it’s happened on a number of occasions, there is that stigma that Josh Warrington leads with his head. I have my chin down. I don’t have my chin in the air and there’s a possibility things like that happen.”

But it’s the slow start Warrington really regrets. He isn’t looking for excuses as much as an explanation to himself as to why he didn’t get started until after the halfway point. Was it the pressure of having the fight of his dreams next? Was it how awkward he found Lopez to adjust to? Was it concern over his previously broken jaw? Or was it all of the above?

“[We] Had to leave sparring to the last minute…” Warrington said. “Straight back in with IBF mandatory… That’s the rub of being a champion, you have these demands and you have to stand up to them and take them on. When people come back from injuries – such as broken jaws – you might have a little tune up fight but I’m not going to dwell on it and make it too much of an excuse because I can’t change it. It would have been nice to come back with a bit of a steadier fight, to see where we are, but it is what it is. I still thought I’d do the business.”

There is a degree of uncertainty about what the new year will bring, but Warrington still has a sense of optimism. He’s still hopeful that the work he’s banked in his pro career will take him to where he wants to go.

“With some decent fight news,” he said, of how he wants to start 2023. “I think prior to this one I was thinking, ‘Get this done, defend the belt and hopefully get a unification fight and dictate where I want to go from there at the start of the year.’ Now I’m at a stage where I hope my management team and my promotional team can deliver a big fight to get me back on course. I’ve come away disappointed with myself and people might say it was close and could have gone either way, but if I’d come away thinking it just wasn’t there and would wonder what I have to do [next] and look over other avenues but it was there. It was just a shift in mentality rom the first four or five rounds. As a fighter, you never want to experience these moments but I have to remind myself that fighters lose and they can come back. I’ll take myself onto BoxRec and look at the fighters I admire, like Barrera and Morales, so it’s not the end of the road, is it?”