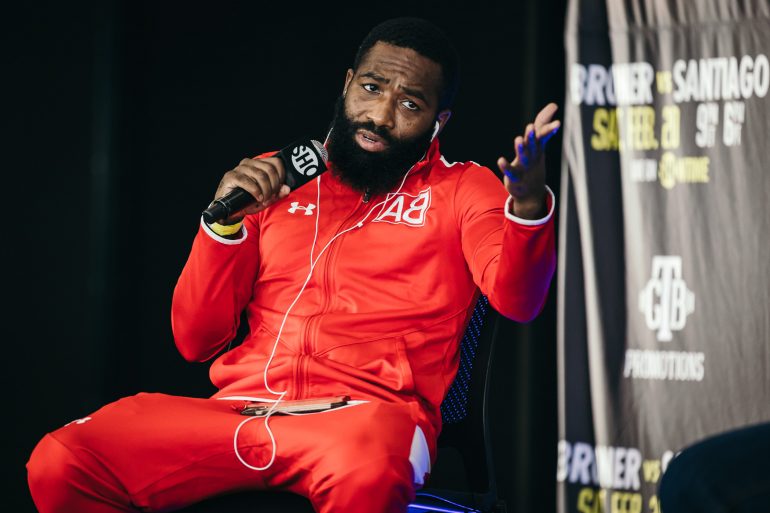 Adrien Broner will make his return to the ring on February 18, but under a new platform.

The self-described “Can Man” will face Ivan Redkach in Atlanta, Georgia, in his debut on the newly created BLK Prime platform, it was formally announced Saturday afternoon. The announcement took place at the CHI Health Center in Omaha, Nebraska, site of Terence Crawford’s successful defense of the WBO welterweight title against David Avanesyan.

Over a month ago, Broner signed a three-fight deal with BLK Prime. He was scheduled to fight Omar Figueroa on August 20 in Hollywood, Florida, which would have headlined a three-fight Showtime Championship Boxing telecast, but withdrew from the fight days prior, citing mental health issues.

The 33-year-old won a vacant world title belt at 130 pounds against Vicente Rodriguez in November 2011 and now currently fights at 147 pounds. Once viewed as one of boxing’s stars-in-the-making, the polarizing Broner built his resume with wins over several well-known names of the early 2010s, including Antonio DeMarco for a lightweight title and Paulie Malignaggi for a belt at welterweight, before suffering a punishing defeat at the hands of Marcos Maidana in 2013. He would also be defeated by Shawn Porter and Mikey Garcia in the following three-and-a-half years.

Redkach (23-6-1, 18 KOs) is also coming off a long layoff, having not fought since April 17 of last year. He faced Regis Prograis, losing by technical decision, but the result was changed to a technical knockout loss after the Georgia Athletic and Entertainment Commission ruled Redkach went down on a legal punch from Prograis.

The loss to Prograis took place in Atlanta.

The 36-year-old Redkach, who is originally from Ukraine and now resides in Los Angeles, previously lost to Danny Garcia by unanimous decision in January 2020. The fight included a bizarre moment when Redkach bit Garcia on the shoulder.

Also on the February 18 card, former IBF world junior lightweight titleholder Tevin Farmer will face Mickey Bey in a 10-round bout. The fight has been in the works for the last several months and has been postponed a handful of times.