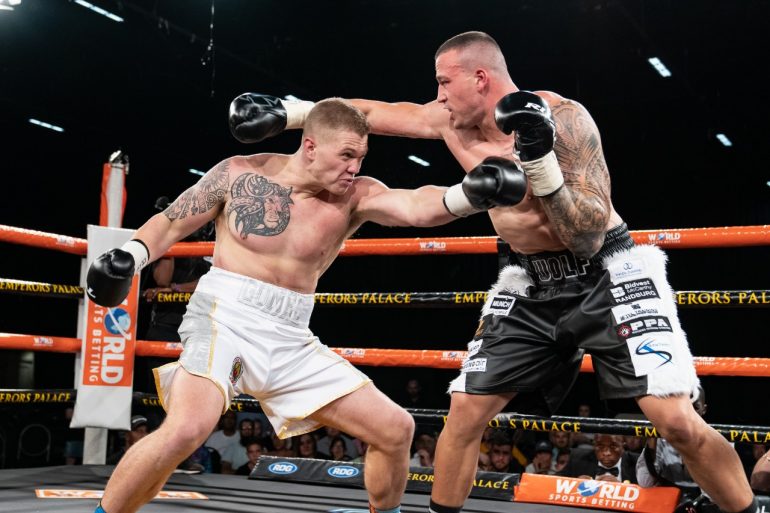 Gomes dropped Thompson heavily in the first round, landing a massive right on the button. He then jumped on his opponent, who tried desperately to hold. Gomes freed himself from the clinch with a left hook-right hand combination, moments later sending Thompson to the canvas again, courtesy of another right. It seemed all over. But to his credit, Thompson rose once more and hung on to Gomes like an octopus. Gomes worked a short right uppercut on the inside whenever he could. Thompson was badly hurt but somehow made it to the bell. 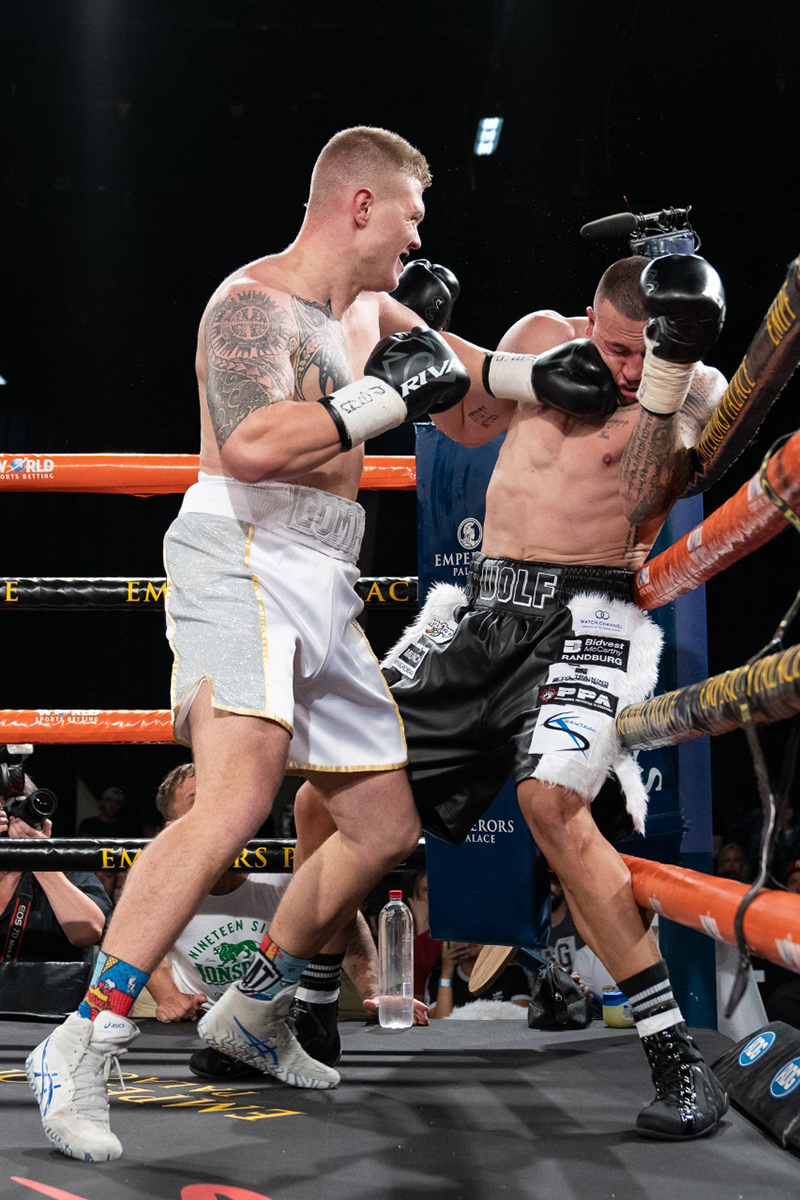 Gomes (left) looked like he would put Thompson away in the first round. (Photo by James Gradidge)

In the second, Thompson was not out of the fog yet but managed to land a straight left from his southpaw stance. Still, Gomes dominated the round with his right hand.

Thompson slowly started to get back in the fight in the third, finally remembering his jab and landing a one-two before Gomes smashed in a right uppercut. The punch seemed to shake Thompson again, and he held at every opportunity.

The momentum finally shifted in the fourth round. Gomes charged out of his corner and landed a succession of rights, but Thompson found the distance and strafed Gomes with a right-left-right to the head. However, when he grabbed Gomes again and tried to place himself behind his opponent, referee Eric Khoza had seen enough and deducted a point, negating Thompson’s gains. That lit a spark under the defending champion, who responded by landing a one-two to the head of Gomes, punctuated by a right hook to the body.

In the fifth, Thompson landed a big straight left and Gomes, who now had a cut under his left eye, seemed frustrated and low on ideas. It was becoming Thompson’s fight, where he would land his shots and fall into a clinch. Lots of untidy mauling ensued, smothering Gomes’ efforts. 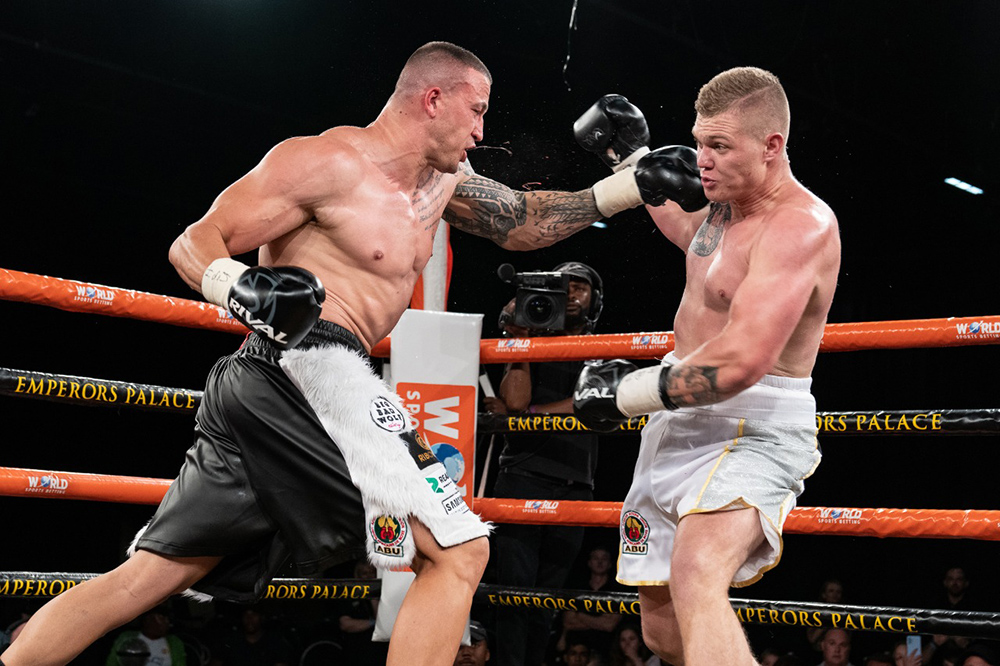 Thompson gradually clawed his way back into the fight. (Photo by James Gradidge)

Thompson looked in control in the sixth, boxing behind his jab and using his straight left and right hook to the body to good effect. He even backed Gomes into a corner and banged away at his body, prompting Gomes to respond with a flurry to the head. Thompson once again negated his good work when a stray punch hit the referee, prompting another point deduction.

Just when it looked like Thompson had clawed his way back into the fight, another dramatic shift occurred. A right hook from Gomes landed, wobbling Thompson. Gomes was on him like a shark, and two more right hooks had Thompson sagging to his knee in a delayed reaction for the third knockdown of the fight. He made it to his feet but was on unsteady legs, prompting the referee to wave the fight over at the 2:59 mark. 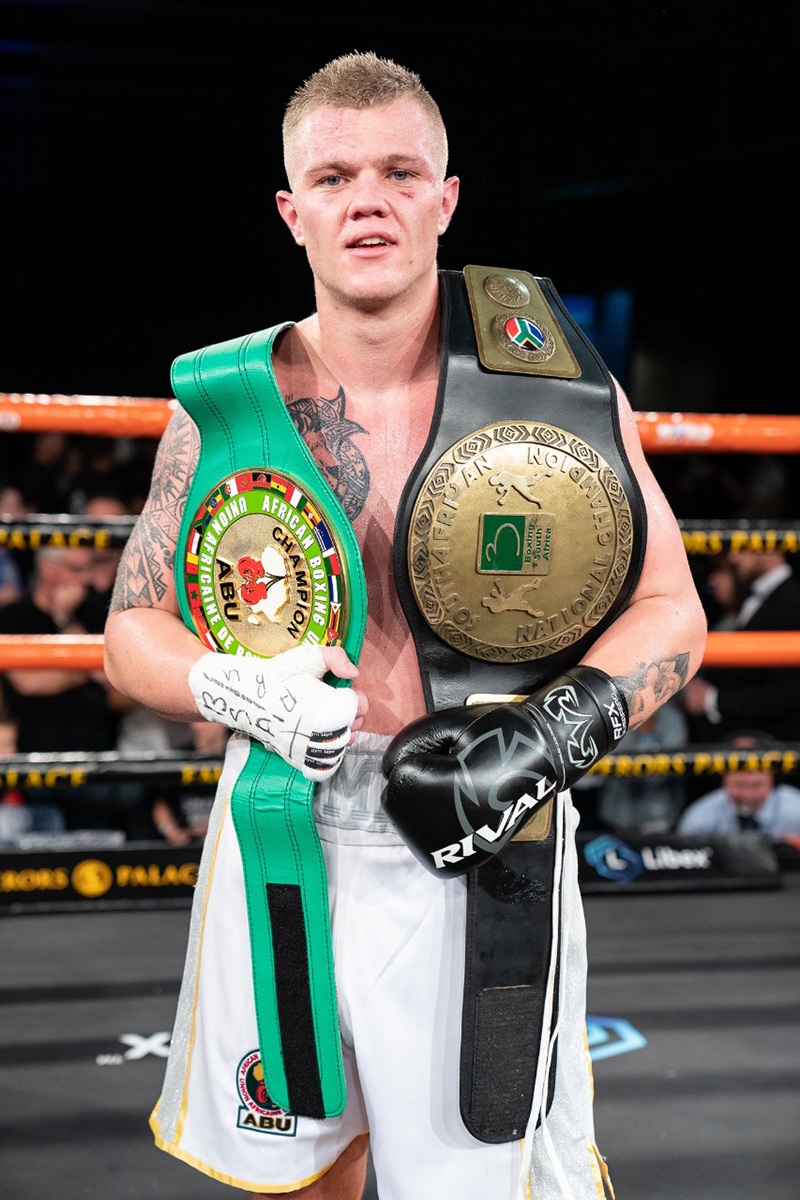 With his win over Thompson, Gomes captured the South African and ABU heavyweight titles. (Photo by James Gradidge)

With the win, Gomes takes his record to 9-2 with seven knockouts while Thompson drops to 12-3-1.

Super middleweight Rowan Campbell got back in the win column after successive losses when he stopped Thembani Mhlanga at the 2:35 mark of the second round.

Boxing behind his jab, Campbell immediately found a home for his straight right. He also knocked Mhlanga onto his heels with a left hook.

Mhlanga tried a few overhand rights in the second, but Campbell just kept coming. He bullied Mhlanga into a corner, where he simply kept punching away to the head and body. After a few solid rights to the head and nothing coming back, the referee jumped in and waved the fight over.

The popular Campbell moves to 13-2 with nine knockouts while Mhlanga drops to 3-8.

In a junior middleweight bout, Jackson Kaptein scored a mild upset when he stopped Phikelani Khumalo in the second round.

Khumalo boxed well behind his southpaw jab in the first, landing some snappy straight lefts for good measure. Just as he was establishing his rhythm in the next stanza, Kaptein landed a chopping right that shook Khumalo badly. Kaptein went after him and let his hands go until Khumalo took a knee. He barely beat the count and turned sideways, away from the referee, who waved it over at the 1:55 mark.

Kaptein improves to 6-1-1 with four knockouts while Khumalo, who suffered his second stoppage defeat, drops to 5-2.

The card was presented by Rodney Berman of Golden Gloves Promotions.