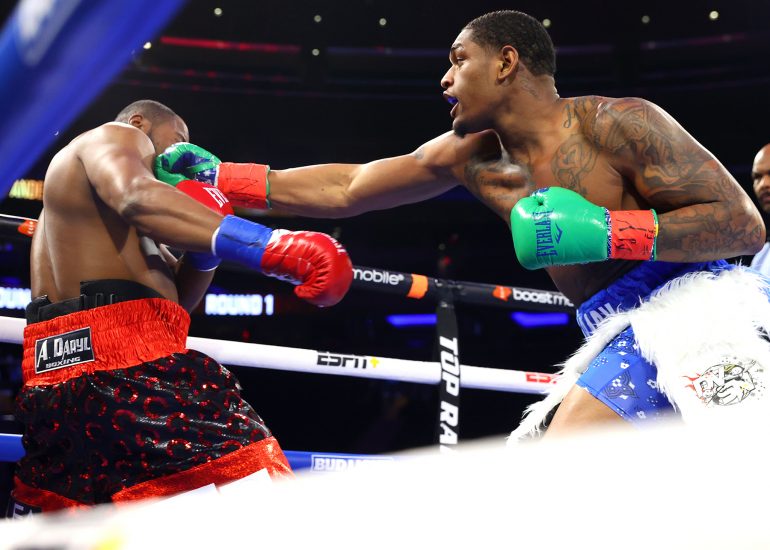 NEW YORK — Jared Anderson got four minutes of work in on Saturday night, but it was a worthwhile outing for the Anderson team and fans watching at Madison Square Garden.

Anderson (13-0, 13 knockouts) kept his knockout streak alive with a second round stoppage of Jerry Forrest (26-6-2, 20 KOs) in the co-feature of the Teofimo Lopez vs. Sandor Martin card, which was broadcast live on ESPN. Before that, Anderson showed he could take a punch after absorbing a few wild overhand lefts in the first round.

Anderson, who walked to the ring dressed as The Grinch, didn’t allow Forrest to spoil his Christmas, pinning Forrest to the neutral corner for the remainder of the opening round, putting such a beating on Forrest that the ringside doctor examined him before sending out for the second round.

“Like my corner said, once I get hit it’s a whole different ballgame. I switch up everything, my mindset, how I fight, everything,” said Anderson of Toledo, Ohio.

“I try to come in cool and calm. I see everybody kind of was expecting him to go out early. I didn’t want that. I did want to get all the way warmed up. But once he did hit me, as ya’ll see, something flipped, and all I saw was red. The 114 punches came and we picked it up.”

Forrest had nothing left for the second stanza, getting frozen by a sweeping right hand that froze him at the 1:34 mark, forcing an immediate stoppage.

The stoppage loss was just the second ever for the 34-year-old Forrest, who was also halted in two rounds by Gerald Washington in his eighth pro fight back in 2013.

Anderson said afterward that he felt ready to step up against the gatekeepers and contenders in the heavyweight division.

“All the big names. All those people who are ranked. Anybody in the top 15 in the WBC, WBO, WBA, anybody up there. Filip Hrgović. Frank Sanchez…Dillian Whyte, Daniel Dubios…Michael Hunter,” said Anderson.

Xander Zayas took the next step in his development as a junior middleweight prospect, outfighting Alexis Salazar to a unanimous decision victory in their eight-round bout. The 20-year-old from San Juan, Puerto Rico earned the victory by the scores of 80-72 on the first card and 79-73 on the other two, awarding him a win against his most experienced opponent to date.

Zayas (15-0, 11 KOs) appeared to score a knockdown in round one after sending Salazar (24-5, 9 KOs) into the ropes with a right hand-left hook combo, but he didn’t get a count. It was all Zayas early on as he dug left hooks to the body of Salazar, before finishing up with combinations to the chin. Salazar finally got into the fight in round 4, backing Zayas off with counter-punches which momentarily dissuaded Zayas from pushing harder for the knockout.

Zayas admits there was still plenty to work on with head trainer Javiel Centeno, but was pleased with the win.

“I got to go back and see this fight, but they told me that I looked good. There were a couple moments where I let down my defense. But I give myself a nice B+,” said Zayas.

The win is the third of the year for Zayas, who started off 2022 with a shutout over Quincy LaVallais in March, and then stopped Elias Espadas in five rounds in October.

Flores, 27, of Norwich, Calif. by way of Guadalajara, Mexico, has lost two of his last three, including a third round stoppage loss against Carlos Adames.