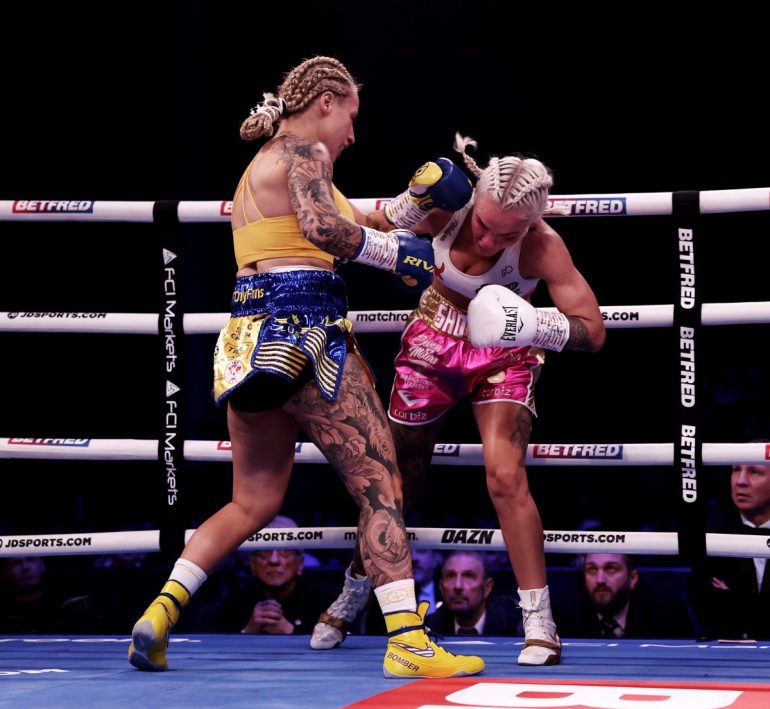 Ebanie Bridges overcame a rocky opening round to dominate game-but-overpowered Shannon O’Connell to an eighth-round stoppage in the chief support to the Josh Warrington-Luis Alberto Lopez IBF featherweight title bout on Saturday in Leeds, England.

In the closing seconds of Round 1, Bridges (9-1, 3 KOs) was rocked by a right-to-the-body-right-to-the-head combination from O’Connell, who had derided her fellow Australian as a “skanky stripper” during the buildup to their grudge match.

However, Bridges, a late-comer to the sport, got on her game in Round 2, setting a torrid pace while utilizing smart pressure that backed O’Connell (23-7-1, 11 KOs) to the ropes where the former body builder continually landed one-two combinations and could out-hustle and out-muscle the taller, rangier fighter.

Even while on the back foot, O’Connell was able to punch back with authority during the early rounds. The bantamweight clashed featured many even exchanges during the first four rounds. However, Bridges’ punches — especially her straight rights and right crosses — did more damage. 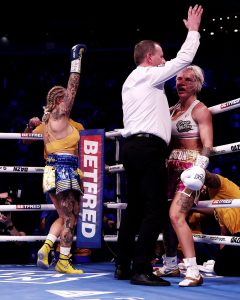 A right hand dropped O’Connell early in Round 3, and the same punch gradually bruised-up her cheekbones and nearly closed her left eye. Once Bridges stepped up her pressure and concentrated some of her high-volume attack to O’Connell’s body in Round 5, the popular 36-year-old from New South Wales took firm control of the fight.

Bridges continued to back a fading O’Connell to the ropes and into corners where she would swarm and maul her arm-weary foe. Referee Howard Foster started watching the one-sided action closely in Round 7, looking for the right moment to spare O’Connell from undue punishment, and had finally seen enough at 1:45 of Round 8.

“Not bad for a skanky stripper,” said Bridges, who made the first defense of the IBF bantamweight title that she won in March. “I like tough fights. I don’t want easy fights. She came, she was hungry, she was fierce. She can bang. But she was so disrespectful in the build up, I can’t give her too much respect now. I was like ‘How ya like them apples?’

“I always gave her respect as a boxer. I knew it would be my toughest fight, and it was, but it was one of my best wins and performances.”

During the post-fight interview on DAZN, Bridge’s promoter Eddie Hearn of Matchroom Boxing said he would like to see Bridges in 118-pound title-unification bouts going forward.