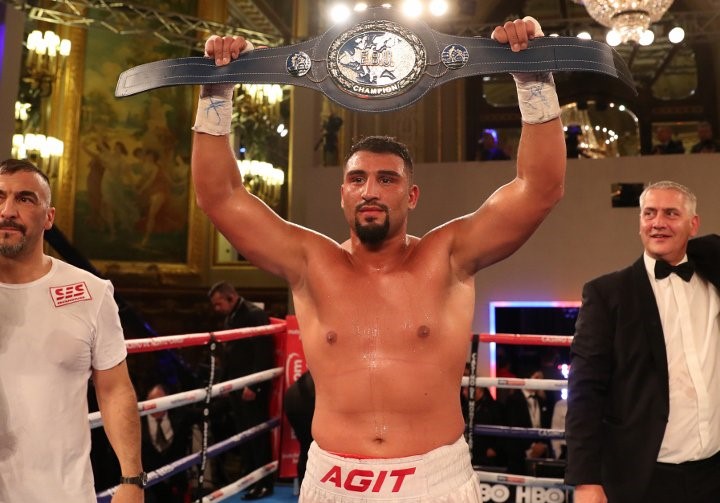 The vacant European heavyweight title will be contested by former incumbent Agit Kabayel and once-beaten Agron Smakici at the Ruhr Congress in Bochum, Germany, on January 28, 2023.

The title has been without an owner since Joe Joyce stopped countryman Daniel Dubois in 10 rounds in November 2020 but then failed to make any defenses and was subsequently stripped.

Since then, plans to fill the vacancy have been complicated by injuries and pull-outs. Most recently, Peter Kadiru had been tabbed to face Kabayel. However, the fight was scuppered when Kadiru was stunningly knocked out in one round by Argentine journeyman Marcos Antonio Ahumada in what was supposed to be a warm-up fight.

Kabayel was a kickboxer before switching to boxing. The German made his professional debut in 2011. The 30-year-old claimed the vacant EBU title by outpointing Herve Hubeaux (UD 12) in 2017, then impressively used his skills to outbox Derek Chisora (MD 12) in his maiden defense. Two more defenses followed before Kabayel vacated in search of a big fight on the world stage. When that didn’t come and COVID-19 halted all boxing action worldwide, he was inactive for over a year and has since struggled to regain his old momentum despite remaining unbeaten.

Smakici turned professional in 2011. The 6-foot-6 Croatian southpaw won his first 15 fights against low-level opposition. When he stepped up, he was knocked out in one round by highly touted Zhan Kossobutskiy in 2019. The 32-year-old has returned with four wins, most notably stopping Lenroy Thomas (KO 3).