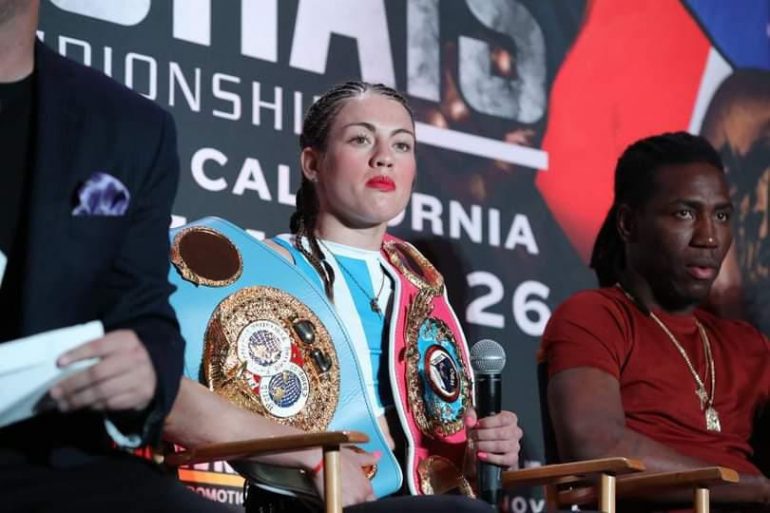 It’s been a while since a fighter named Bermudez has occupied a place in The Ring’s pound-for-pound ratings, but the time for the return of that name to the mythical list could be nearer.

One of two things would need to happen, though: either former multiple division titlist and pound-for-pound entrant Daniela Bermudez recovers from her pregnancy soon and returns to action with a high-profile win, or her sister and current two-belt junior flyweight champ Evelin wins her impending fight against strawweight two-belt titlist Yokasta Valle in California in the undercard of the Jose Zepeda-Regis Prograis main event on Saturday, Nov. 26 (FiteTV), and does it with a statement emphatic enough to trigger her inclusion in the pound-for-pound ratings.

The second option seems closer than the first one, but for that, Evelin (17-0-1, 6 knockouts) would have to score a decisive win in what would only be her second fight abroad (the first one being a split draw in Mexico in which she sent her foe to the canvas twice but failed to get the win) and against a fighter like Valle (26-2, 9 KOs) who was recently included, however briefly, in The Ring’s pound-for-pound list.

“We know she’s a good opponent, she’s had a few international fights and so have I,” said Bermudez in a phone interview, but not without offering a caveat that marks a serious difference between them.

“We have three opponents in common. She defeated all three on points but I knocked all three of them out (Debora Rengifo, Yaditza Perez and Luisana Bolivar). So I believe it will be a great fight, we are good opponents for each other, our styles will mix up well.”

The notion that their matchup (in which Bermudez’s IBF and WBO trinkets will be on the line) will be a closely disputed one is a given. They both throw dozens of punches per round, and their superb boxing skills will make for a very interesting and entertaining bout. But Bermudez is focused on returning to her native Argentina with both of her titles under her arms, and that will take some extra work.

“We are ready because we don’t want this to go to the scorecards,” said Bermudez, rated No. 2 behind Seniesa Estrada at junior flyweight. “Fighting abroad is always difficult and we need to win this one. I would love to win by stoppage, this is what I have in mind. I hope everything goes well and I hope things will go our way.”

Having watched Valle’s one-sided destruction of previously unbeaten Vietnamese champ Thi Thu Nhi Nguyen in Costa Rica back in September, Bermudez is well aware of the fact that a win will depend on her ability to take the fight to Valle and put it all on the line if she wants to have any chance of success.

“It will be a tough fight, yes,” said Bermudez. “We will both go to war, and my idea is to get things done before the scorecards, because we want to win early and get the result out of the judges’ hands. We know that this will be hard because we’re the visitors, we are well aware of that.”

Not everything is tilted against Bermudez here. Valle, rated No. 2 at strawweight also behind Estrada, will be coming up in weight for this fight, presumably handing Bermudez a slight advantage. But the champ doesn’t count on it as a plus.

“I don’t see it as an additional advantage for me, it’s just a few ounces in my favor,” said Bermudez, who has fought mostly at 108 but occasionally at 112 pounds as well. “Actually, I got the call to fight at 105, and I said yes. But they later said that they would rather fight in my division, and I think that she feels better in my division and that’s why she’s coming up in weight.”

If Bermudez succeeds, her chances to join the pound-for-pound list and thus join Daniela as the first pair of siblings to be part of such a ranking in its entire history becomes a real possibility. But Evelin would not settle just for that.

“I definitely see it as a goal. I want to be the No. 1 on that list, and I believe that if I win this fight I will have many opportunities and many doors will open for me, things will improve a lot in my career.”