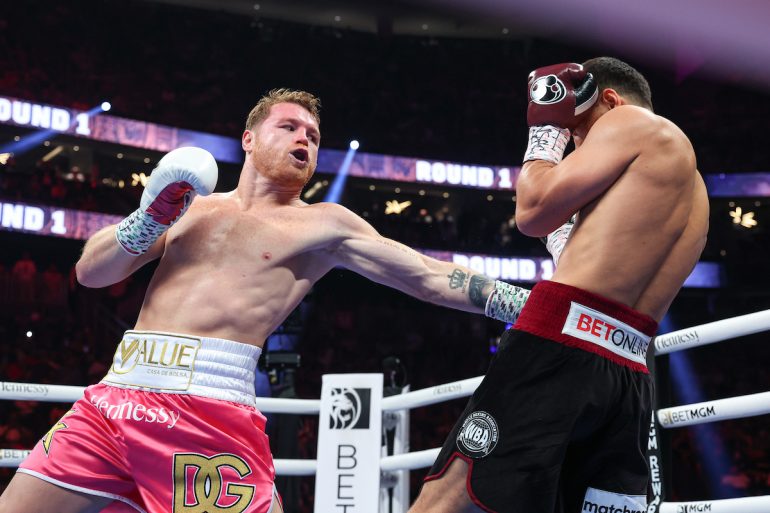 Canelo Alvarez has outlined his plan in the ring for 2023.

The Ring Magazine super middleweight champion looks to return to the ring on Cinco de Mayo weekend and in September during Mexican Independence Weekend.

In an interview with ESPN’s Salvador Rodriguez, Alvarez said he will begin working with mitts in January after spending time with family and recuperating from an injury to his left wrist that was reaggravated during the Gennadiy Golovkin fight on September 17. Alvarez had surgery last month.

“My plan right now is to return in May,” Alvarez said to Rodriguez at an event late last week to promote his new drink brand, VMC. “I’m going to start training in January and see how I feel after that.”

Alvarez (58-2-2, 39 knockouts), who resides in Guadalajara, Mexico, is not looking at a particular opponent in May but is adamant about facing WBA light heavyweight titleholder Dmitry Bivol in September.

“The idea is to return in May with a tuneup fight to see how I feel and then get the rematch against Bivol in September,” said Alvarez, who is trained by Eddy Reynoso. “That’s the only thing I want for my career right now.”

Alvarez rebounded from his loss to Bivol to defeat Golovkin by unanimous decision in what turned out to the most one-sided fight of the trilogy, despite Alvarez not letting his hands go. The injury to his left wrist would explain the low punch output.

One possible opponent for Alvarez in 2023 or even the following year could be unbeaten David Benavidez, who is the mandatory challenger to the WBC super middleweight title, which Alvarez has. Benavidez is scheduled to face Caleb Plant, reportedly in March of April.

The 32-year-old is open to any and all opponents.

“Let’s see how that fight goes,” Alvarez said. “It’s a very competitive fight, and to me, I see Benavidez winning. But my focus is on the Bivol rematch.”

Alvarez stopped Plant on November 6 of last year to become the current undisputed super middleweight champion of the world.