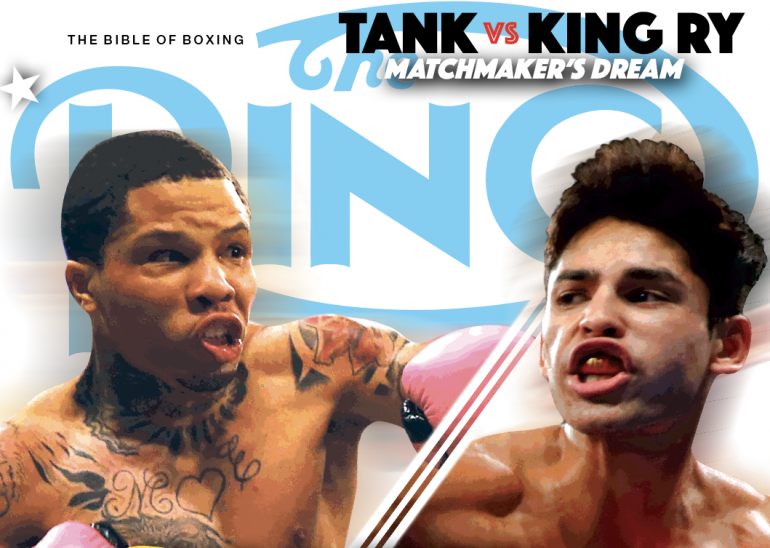 Ring-rated lightweights Gervonta Davis and Ryan Garcia were the cover stars of the October 2022 issue of The Ring, available for purchase at RingMagShop.com.
17
Nov
by Ryan Songalia

Gervonta Davis and Ryan Garcia will meet in a highly-anticipated bout in the first half of 2023, both fighters announced Thursday through their social media accounts.

The 12-round bout will take place at a catchweight of 136 pounds in Las Vegas, and will be broadcasted by Showtime Pay-Per-View.

The agreement represents a rare instance of promotional entities working together to make a significant bout, with Davis being represented by Mayweather Promotions and Premier Boxing Champions, while Garcia is promoted by Golden Boy Promotions.

“The hype, the storylines, the two athletes defining their sport inside the ring and out. I am going to knock ‘Tank’ out and take my place as the face of our incredible sport, and I’m bringing a new generation of boxing fans with me. I appreciate Tank volunteering to get beat so that I can get to work.”

The news was confirmed by both Showtime Sports and Golden Boy Promotions.

All credit to Tank and Ryan. Lots of obstacles along the way, but they both stayed the course to give the fans the fight they want. #DavisGarcia #TankRyan pic.twitter.com/nOge6tHJxF

“Tank Davis vs. Ryan Garcia is one of the biggest and most exciting fights that can be made in boxing,” said Stephen Espinoza, President of Showtime Sports.

“We have two supremely talented boxers, both in their prime, who have amassed huge fanbases, meeting in a career defining fight. This is the epitome of a crossover boxing event. All credit to Tank and Ryan for staying the course and giving the fans the fight they want.”

Adds Golden Boy CEO Oscar De La Hoya: “It’s high time that those outside the ring stop getting in the way of those who want nothing more than to get into the ring and fight. Our motto has always been that the fans come first, and this is just another example of how we’re leading by example.”

Davis first must get past an opponent to be named on January 7. Davis reiterated on Instagram that he would be fighting in Washington D.C. “We cannot look [past] this guy,” wrote Davis.

Garcia (23-0, 19 knockouts) has fought twice in 2022, winning a wide decision over Emmanuel Tagoe in April before knocking out former contender Javier Fortuna in six rounds in July.

Davis (27-0, 25 KOs) of Baltimore last fought in May, stopping previously unbeaten Rolando Romero in six rounds. Garcia of Los Angeles is four years younger at 24, and will have a 5-inch height advantage at 5’10”.