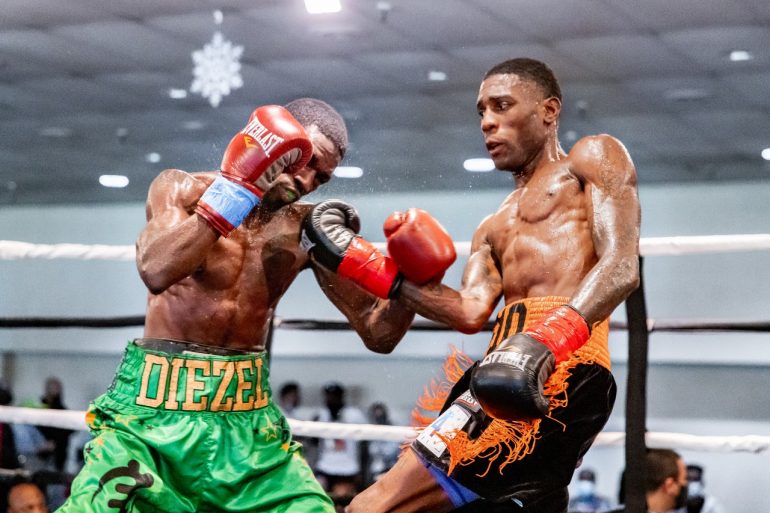 Crowder lands an uppercut in a unanimous decision win over Rob Diezel in September of 2021. Photo by Star Hinojosa
17
Nov
by Ryan Songalia

It isn’t often that one encounters a 6-foot, switch-hitting bantamweight with power, but that’s the unique puzzle that Dominique Crowder presents to opposing boxers.

The prospect from Baltimore known as “Dimes” hopes to take his next step towards title contention on Saturday, when he faces Filipino fighter John Mark Alimane at the Entertainment and Sports Arena in Washington D.C. The show will be headlined by the return of Dusty Hernandez Harrison, who is fighting for the first time since his father Buddy Harrison was murdered in September.

For Crowder, the eight-round bout is a chance to sharpen his tools before stepping up to the ten-round level in 2023. At age 29, Crowder stepped down in weight to 118 pounds, where he believes he can get to a big fight quicker.

“I feel like I’m on a timer so me and my team, we want to make a move. I feel like I can make a big splash quick. We just gotta take it step by step and stay focused,” said Crowder (13-0, 8 knockouts). 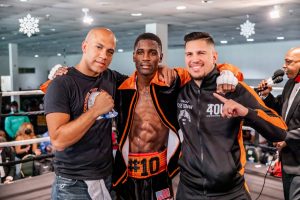 The championship level is where Crowder has envisioned himself ever since he first turned on a Floyd Mayweather Jr. fight in 2006 and fell in love with the sport. As he grew, he realized his body type – tall, skinny and rangy – was different from “Money” Mayweather’s, and so too would his approach be.

Crowder estimates he had close to 90 amateur fights, winning a number of national and regional tournaments, while being ranked no. 2 in the country behind 2020 Olympic silver medalist Duke Ragan.

He linked up with head trainer Jose Luis Guzman, a New York-based ex-pro, at a tournament in Nebraska, and credits the 21-fight veteran with helping transition him into a true pro who sits down better on his punches. He also works with former pro champ and 1984 Olympic gold medalist Mark Breland, his assistant trainer who exposed him to the top level of the sport by bringing him out to training camps with Deontay Wilder.

“We’re used to working on the right hand, working on the outside, staying tall because we’ve got similar builds so,” said Crowder of his work with Breland.

“He basically wanted me to fight like him, pick up where he left off.”

Crowder has been based in New York since 2011, when he and his father picked up and moved out of Baltimore for bigger opportunities. He laments that Baltimore isn’t a big boxing city – aside from Gervonta “Tank” Davis – and says he had to leave in order to stay focused.

“Once you make it to that level, I don’t think it’s really a reason to be back in Baltimore, unless you’re giving back. Otherwise there’s really nothing down there,” said Crowder.

“It’s a very negative place. Some people, they just wake up angry and they don’t want you to succeed. It’s not a place where you want to raise your children at.”

Guiding Crowder’s career is manager Adam Glenn, the son of legendary boxing trainer/manager Jimmy Glenn, who also runs the BXNGTV.com streaming service. Glenn says that Alimane (8-1, 4 KOs) is a late replacement foe after several others withdrew from the assignment. He says he has reached out to a number of other undefeated prospects in the past, but hasn’t found any takers for a “someone’s ‘0’ has to go” bout.

“He’s not a secret anymore. As soon as they look at Boxrec or some tape, they go ‘This kid is 6-feet tall, he’s got reach, he can switch, he looks as good southpaw as he does orthodox, he has a lot more power than anyone ever thought he would as an amateur,’” said Glenn.

“We have a lot of undefeated guys turning us down.”

One of the top fighters who have been impressed with Crowder is former WBC featherweight titleholder Mark Magsayo, who brought Crowder to camp at the Wild Card Gym to spar ahead of his fight with Rey Vargas.

“He is very good with distance…his jab favors him a lot because of his height. His style is hard to beat,” said Magsayo (24-1, 16 KOs). “I know he will reach his goals in boxing.”

Glenn says he believes Crowder, a promotional free agent, will have to sign with a big promoter in order to get the big fights he desires. Crowder says he’s just about ready to fight the top guys in his new division.

“[Naoya Inoue] of course, [Jason] Moloney, all them guys. Whenever we get there, we’ll see them. That’s how I look at it,” said Crowder.