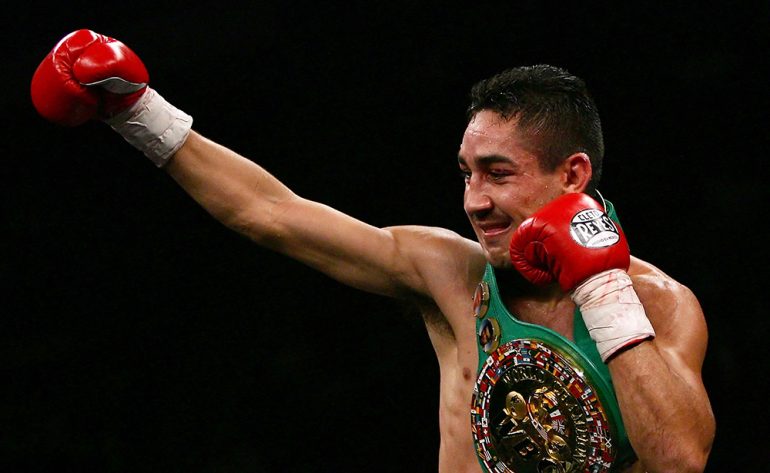 Soto, who is the eldest of four children, was born in Los Mochis on May 11, 1980. His father worked as a bus driver, while his mother was a housewife.

“I had a very tough childhood,” Soto told The Ring through Mauricio Gonzalez. “[We didn’t have] anywhere to stay at times, no food at times, the same story as many boxers.

“I was a street vendor and sold tamales, bread, etc. I worked at a grocery store bagging groceries. I had to work since I was a kid because I had to bring food to the table.”

“I learned the hard way, but I never quit; I never gave up.”

His grandfather introduced him to boxing when he was 7 years old and gave him his nickname.

“My ‘tata’ (grandfather), Mr. Juan Angulo, rest in peace, took me to an amateur tournament,” Soto explained. “One kid didn’t show up. I begged my tata to let me fight. ‘That kid will beat you,’ he said. ‘He has many fights; you’ve never had one. You have not even trained for boxing.’ I insisted and he gave me a lesson and let me fight. The kid beat me, obviously, but before the fight, the announcer asked my grandpa how to introduce me and he said, ‘Zorrita.’

“Zorrita in Mexico is a slang for someone that is a little bit quiet, watching, like an animal waiting for his prey. It’s also a slang for ‘whore.’ (laughs) If you call a girl ‘Zorra,’ you mean she’s a whore. My tata told me that he called me Zorrita for the hunter thing (also meaning ‘Little Fox’), not for the whore one. (laughs) I hope he didn’t lie to me!” 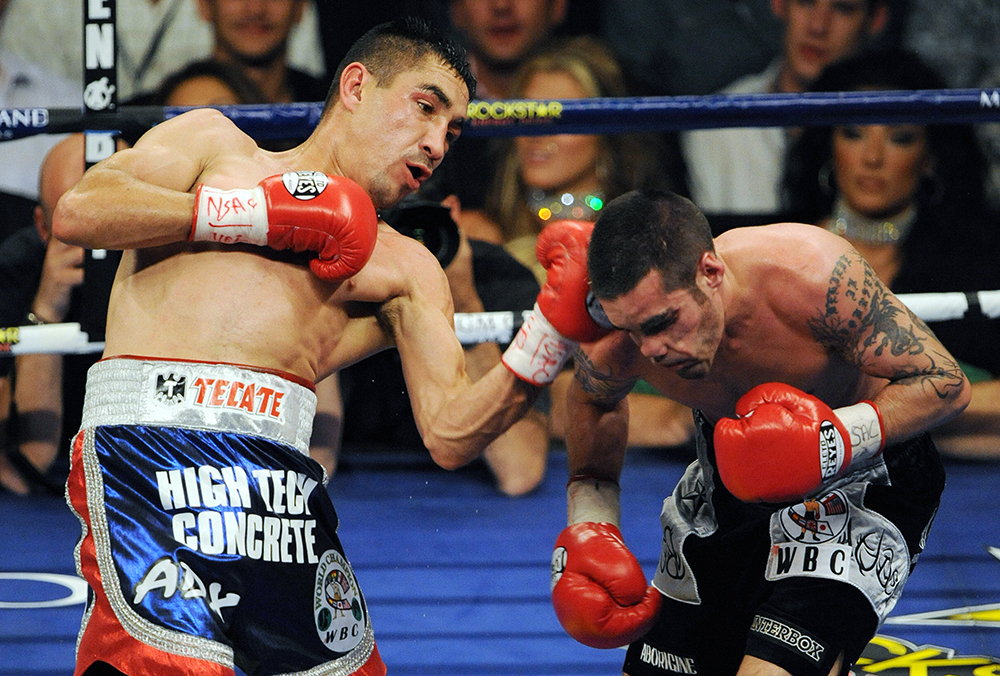 Soto tags Benoit Gaudet with an uppercut during the second defense of his WBC junior lightweight title. (Photo by Mark Ralston/AFP via Getty Images)

Soto went on to thrive as an amateur, winning regional titles. He had a record of 52-8 before deciding to turn professional at 17.

Soto’s early professional career on the tough Mexican circuit was particularly difficult. It was his proving ground, however, and though he suffered some defeats along the way, he showed promise. Notably, he fought on even terms with former featherweight titleholder Kevin Kelley but lost a controversial 10-round majority decision in Las Vegas in July 2002.

“I like to challenge myself all the time,” Soto explained. “By that time, my only way to help my family was in boxing. I learned on the way up. I didn’t have a decent trainer or a company behind me. I learned the hard way, but I never quit; I never gave up.” 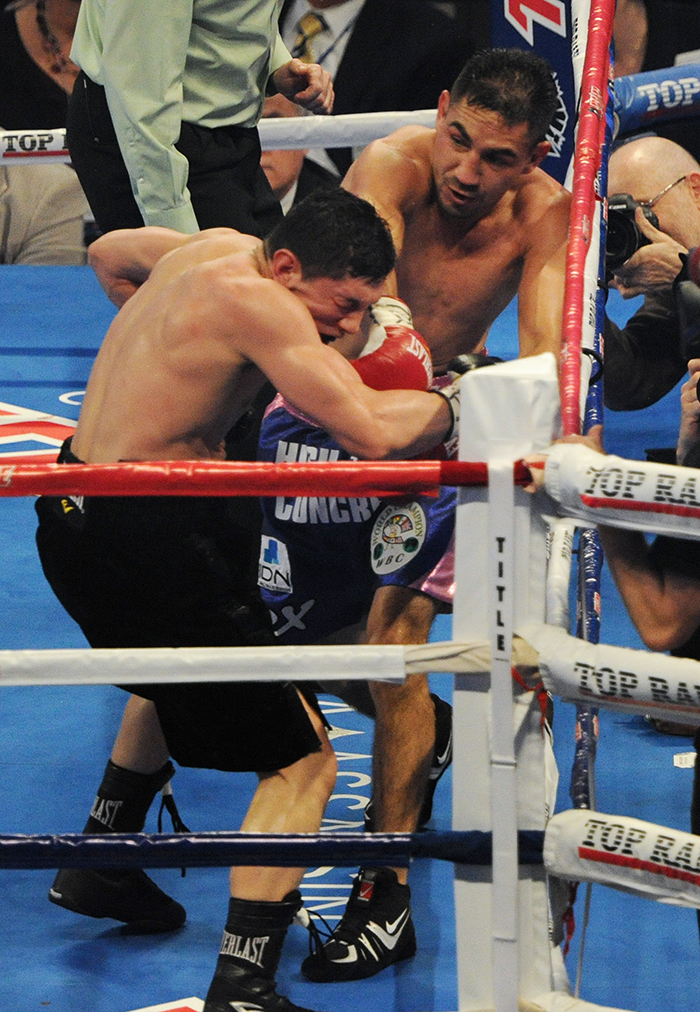 Over the next couple of years, Soto reeled off 13 wins without a defeat. His big break came in 2005 when WBC 126-pound titlist In-Jin Chi was forced to pull out of a fight against then-unbeaten 2000 Olympian Rocky Juarez.

“I was scheduled to fight at the Orleans Hotel in Las Vegas,” recalled Soto. “Then my manager, Antonio Lozada, saw that the WBC announced that Rocky Juarez was one of the challengers for the vacant [interim] title without an opponent, so he spoke with Mr. [Jose] Sulaiman to put [forward] our claim for that fight. I was ranked No. 5. The Juarez team took that fight. I think that they thought that we were not in a hundred percent condition.”

Soto stepped in on two weeks’ notice and stunned Juarez to win a razor-thin decision, 114-113 on all three cards.

“That is the one that opened the door for me — it was unbelievable. I made the most money I ever made [up to that point] and was able to buy my mum a house with the [purse] from that fight.”

After a couple of hometown appearances, Soto moved up to 130 pounds. Although he won a WBC eliminator, ultimately he fought Joan Guzman for the WBO title in Atlantic City in November 2007.

It proved a difficult style matchup for Soto, who was thoroughly outboxed to a lopsided decision loss. But his work was rewarded with a career-high payday of $300,000.

After a comeback win, Soto looked set to win the WBC interim title when he met Francisco Lorenzo on the undercard of Manny Pacquiao-David Diaz in Las Vegas in June 2008.

Soto dropped the Dominican fighter twice in the fourth round. However, in the process of scoring the second knockdown, he caught Lorenzo while taking a knee. Lorenzo was unable to continue and referee Joe Cortez disqualified Soto.

Due to the contentious nature of the loss, a rematch was ordered, this time for the vacant WBC 130-pound title in December 2008.

“When I went into the fight, I knew I was going to win,” said Soto, who won a wide 12-round unanimous decision. “Lorenzo was an entertainer that was able to get the ref to disqualify me [in the first fight].” 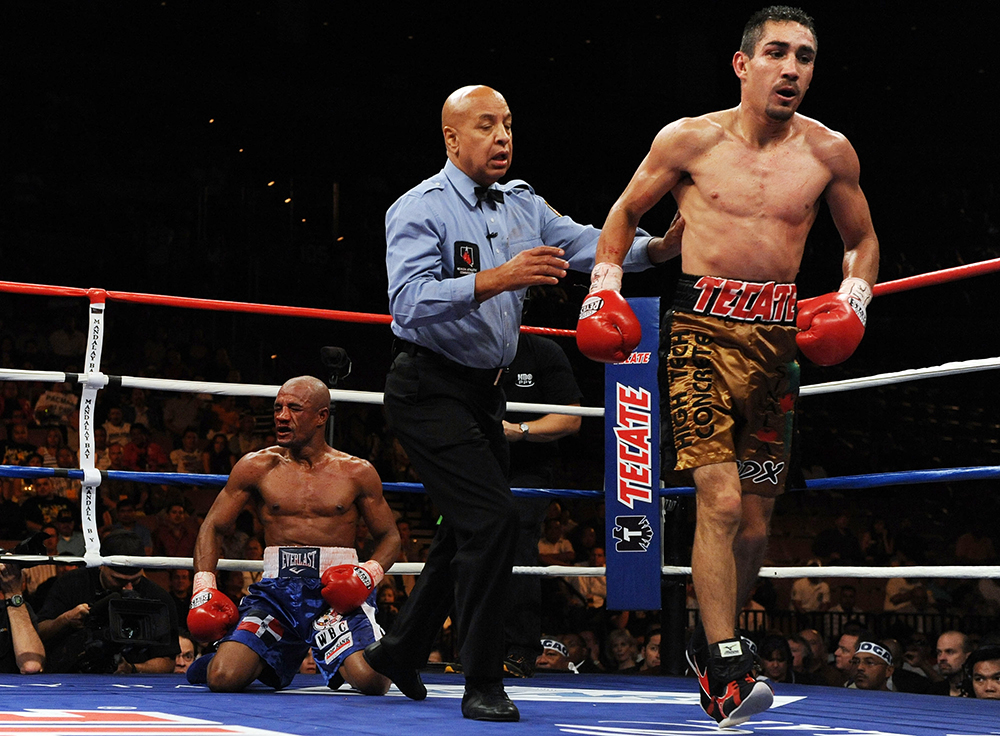 Soto is escorted away from the fallen Francisco Lorenzo. (Photo by Harry How/Getty Images)

“It was something beautiful and great,” said Soto. “There are millions of boxers around the world, but only very few of us are picked to be world champions, and I’m privileged to be one of those.”

Soto decided to vacate his lightweight title and step up to junior welterweight. After a couple of wins in Mexico, he headed to Staples Center in Los Angeles to face dangerous power-puncher Lucas Matthysse in June 2012. 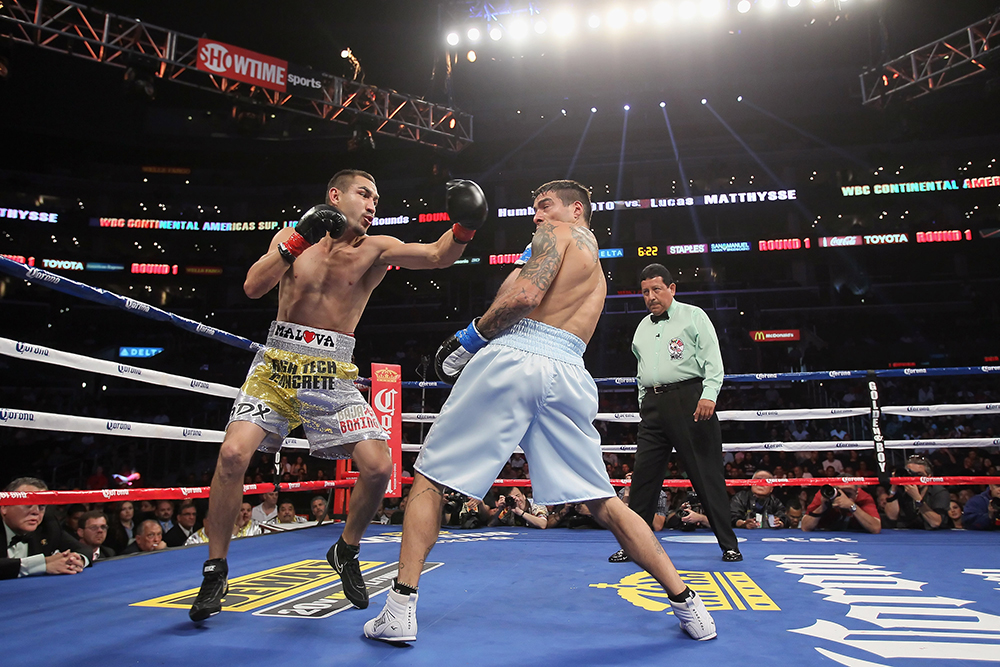 Although Soto enjoyed early success, the Argentine dropped him for the first time in his career in the fourth round. The dazed Soto was unable to continue and the fight was stopped.

“That night just wasn’t my night,” he admitted. “The first four rounds, I was winning that fight [on two of the official scorecards]. There were some personal issues happening when I fought Matthysse, issues that I don’t want to talk about that didn’t let me focus on the fight like I should have. Don’t get me wrong; I don’t want this to sound like an excuse. Matthysse was better than me and he won without an excuse. What-ifs don’t exist.”

Unperturbed, the now-veteran got back to winning ways and reestablished himself with five wins in Mexico. Then the opportunity came to face John Molina on the undercard of Floyd Mayweather Jr. vs. Marcos Maidana 2 at the MGM Grand in Las Vegas in September 2014.

“After the Matthysse fight, many people thought that I was done, that my career was over,” said Soto, who boxed his way to a 10-round unanimous decision. 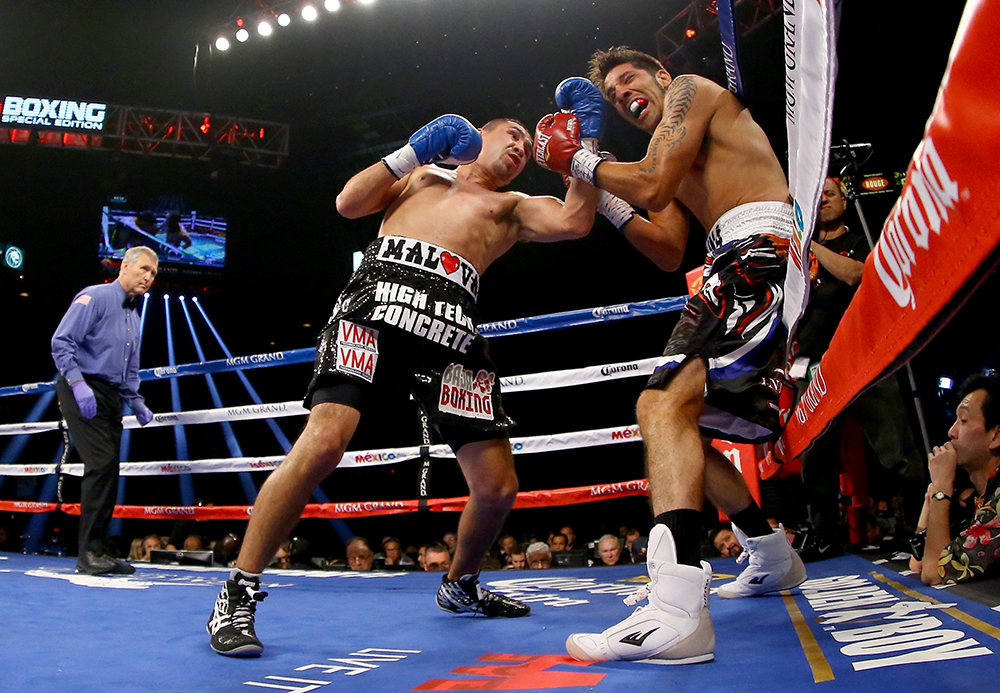 Even nearing the end of his career, Soto was too much for John Molina. (Photo by Al Bello/Getty Images)

The win earned him a fight with rising star Frankie Gomez in May 2015. However, the ill-disciplined Gomez missed weight by 6½ pounds. Although Soto agreed to up the weight limit as long as Gomez didn’t rehydrate too much. Ultimately, Gomez’s team said he couldn’t shed any more weight and the fight was canceled, costing Soto his $250,000 purse. Soto was allowed to keep a five-figure fee for training expenses.

When Soto did resurface a year later, he was beaten by then-unbeaten prospect Antonio Orozco (UD 10). He was then tabbed to face up-and-comer Josh Taylor in Scotland in March 2018 but was cut in sparring and unable to fight.

After recovering, Soto won two fights and met former lightweight titleholder Brandon Rios. Both fighters pushed the all-action fight, but it was Soto’s wily boxing skills that prevailed via 10-round unanimous decision.

That win set up a fight with Jessie Vargas at the Forum, Inglewood in April 2019. It proved a bridge too far and the proud Soto was stopped on his feet at the end of the sixth round. He retired with a record of 69-10-2 (37 knockouts).

Jessie Vargas: “Humberto Soto fights to the end a lot like me, so we’ll put on a great fight”

Soto, now 42, has three children and still lives in Los Mochis, where he owns taxis and buses and works with amateur boxers.

“I have three taxis and five buses that work in the city and two business vehicles to transport business personal,” he said.  “Sometimes I drive them and people are surprised when they see me at the wheel, working. I love to work. I think I’m a humble guy.”

Joan Guzman: Guzman’s jab was good, but it wasn’t a hard, stiff jab. It was a fast jab. It was to find the distance.

Guzman: He would move around so much. Guzman was toughest for me because of his movement.

Guzman: He was overall fast. After he jabbed, he moved to the right or left. He had overall good speed.

Benoit Gaudet: That was a tough fight because the guy would move and he had good foot movement. He had beautiful foot movement and knew how to use it and move around the ring.

Francisco Lorenzo: He was able to bait the referee and judges and I was disqualified because of his cleverness and wittiness.

Antillon: Brandon Rios and Antillon. I hit them with everything and the kitchen sink, and they were still there. I think Antillon. He would still come back for more.

Lucas Matthysse: Rocky Juarez and Matthysse are the two punchers I felt the most. When they hit me, I could tell they had power. Matthysse’s the one guy that definitely knocked me down for real when we were fighting. He was the hardest puncher, without a doubt.

Guzman: It’s very hard for me, because you’re talking 82 fights. [Editor’s note: A 2004 bout against Jorge Solis ended in a no-contest, thus the additional fight Soto is counting.] I had so many tough fights. Rocky Juarez, David Diaz, Jesus Chavez were all good boxers. Guzman was a very good, complete boxer, didn’t hit hard but he had good overall boxing skills.

Matthysse: Nobody did to me what Matthysse did to me. He was definitely the best fighter I shared a ring with.