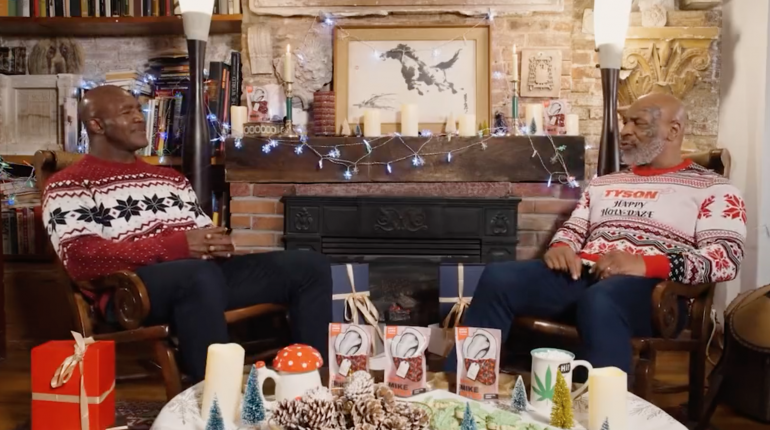 Mike Tyson and Evander Holyfield made history as rivals, but now they’re planning to money together with a new cannabis-infused product.

The former heavyweight champions announced the launch of the ear-shape Delta 8 “Holy Ears” product, which is available in the Cherry Pie Punch flavor.

The announcement was made in a commercial which both boxers shared to their social media accounts. In the video, Tyson and Holyfield are exchanging Christmas gifts in their best (or cheesiest) Christmas sweaters. Holyfield gifts “Iron Mikes a clothing iron, saying “I’m glad we ironed things out.” Tyson then gifts “The Real Deal” with a pack of the snacks, which Tyson insists taste like his ear.

“I ate your ear, I should know,” Tyson jokes.

“Holy Ears” is just the latest in ear-themed edibles that are marketed by Tyson’s cannabis company, Tyson 2.0. Tyson also sells “Mike Bites” in several other flavors at the same price as the “Holy Ears” ($29.99), such as “Black Eye Berry.”

“From Mike Bites to Holy Ears, now cannabis fans around the world can experience the same wellness benefits that plant-based products have brought me,” said Tyson in a statement.

It’s the time of the y(ear) that brings people together. 👂🏾🥊 Shop the Delta 8 Holy Ears collection at https://t.co/ktPFTTl2rL now! @itstyson20 @holyfield pic.twitter.com/ZESidPvVAf

The two are forever intertwined in boxing history for their pair of bouts in 1996 and 1997, which are remembered for different reasons. Holyfield won their first bout by eleventh round stoppage in a significant upset to lift the WBA heavyweight title from Tyson. The following year, Tyson was disqualified after three rounds to biting Holyfield twice in a bout of rage.

“Mike and I have a long history of competition and respect for one another. And that night changed both of our lives. Back then, we didn’t realize that even as power athletes, we were also in a lot of pain,” added Holyfield.

“Now, nearly 20 years later, we have the opportunity to share the medicine we really needed throughout our careers.”

The edibles will be offered in THC, Delta 8 and other hemp-cannabinoid varieties, and will be available. At retailers in Arizona, Illinois, Nevada and New Jersey, as well as online through tyson20global.com.

Carma Holdings, which houses the Tyson line, says it will launch a line of cannabis products from Holyfield as well.