Christian Mbilli to face Vaughn Alexander on December 17 in France 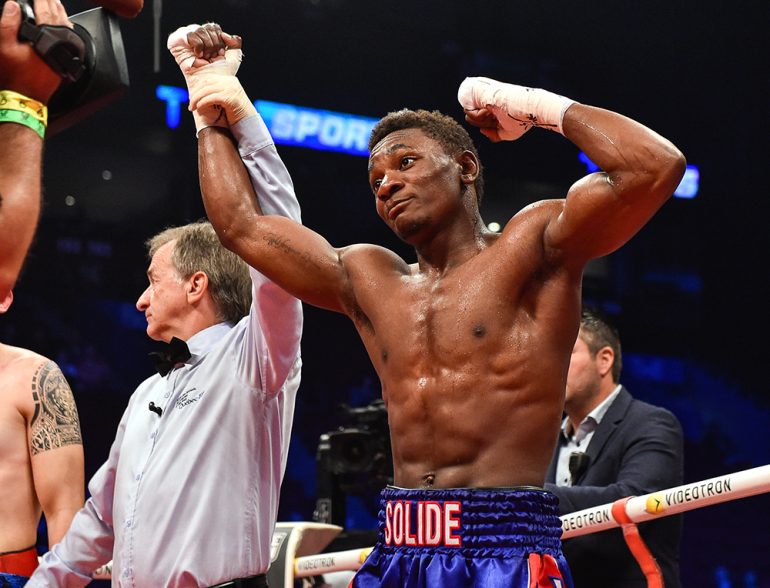 Christian Mbilli celebrates his victory over Cesar Ugarte at the Bell Centre in Montreal. (Photo by Minas Panagiotakis/Getty Images)
14
Nov
by Anson Wainwright

Super middleweight contender Christian Mbilli will face Vaughn Alexander in Nantes, France, on December 17, it has been announced.

Mbilli (22-0, 20 knockouts), who is rated No. 5 by The Ring at 168 pounds, represented France at the 2016 Olympics, losing to eventual gold medalist Arlen Lopez at the quarterfinal stage.

He moved to Canada and has started to work his way up the rankings, impressively dominating Ronald Ellis (UD 10), scoring an eye-catching knockout over former world title challenger Nadjib Mohammedi (KO 5) and, most recently, blitzing DeAndre Ware (KO 2). The all-action fighter has caught the eye and is part of the new breed in the division.

Alexander (17-6-1, 10 KOs) turned professional in 2004. The older brother of former two-weight world champion Devon, he won his first five fights before being incarcerated for 11 years for robbery.

Free after 11 years, Vaughn Alexander is hungry to resume his career

After his release, the 36-year-old kicked off his second career in October 2016 and reeled off seven wins before losing to Denis Douglin (UD 10). He then narrowly lost to current WBO middleweight titleholder Janibek Alimkhanuly (SD 8). Since then, his form has been patchy, usually stepping in to face a rising contender. The St. Louis native has shown he can be a dangerous opponent by upsetting  Money Powell IV (SD 8) and Luis Arias (SD 10). Alexander is usually durable and should give Mbilli rounds; he has only been stopped once, by Zach Parker (TKO 2) .

Cissokho (15-0, 9 KOs) was born in Senegal but moved to France at a young age. He was a standout amateur, winning three national titles, three world championships and a bronze medal at the 2016 Olympics.

Since turning professional in early 2017, Cissokho has campaigned at junior middleweight but will drop to welterweight to face Mbenge. The 31-year-old holds wins over Dmitry Mikhaylenko (UD 10), Ismail IIiev (TKO 4) and, most recently, an off-the-floor win over Roberto Valenzuela Jr. (UD 10).

Mbenge (19-1, 15 KOs) represented South Africa at the 2011 World Championships and took bronze at the 2014 Commonwealth Games. He won the national title in 2017, two years after turning professional.