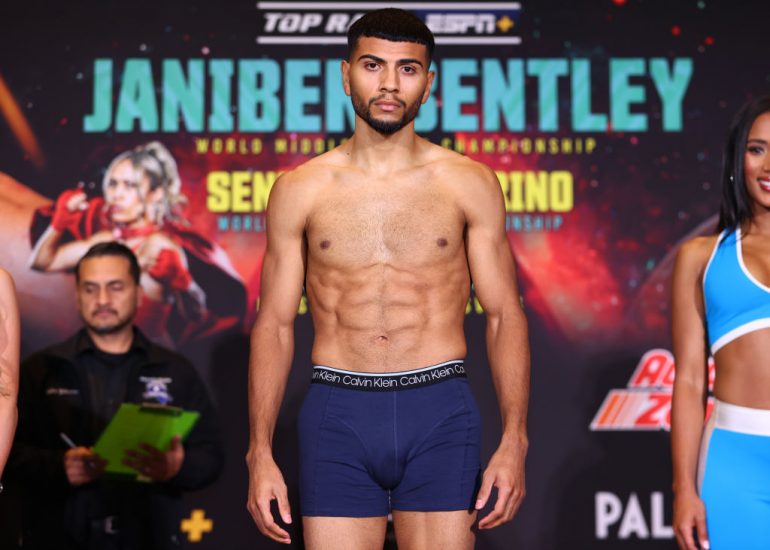 Raymond Muratalla on the scale during the weigh in ahead of his lightweight fight with Miguel Contreras at Palms Casino Resort on November 11, 2022 in Las Vegas. Photo by Mikey Williams/Top Rank Inc via Getty Images
12
Nov
by Doug Fischer

Lightweights Raymond Muratalla and Emiliano Vargas advanced their young careers on the Janibek Alimkhanuly-Denzel Bently undercard on Saturday in Las Vegas, both winning via impressive stoppages.

Muratalla (16-0, 13 KOs) overwhelmed once-beaten (and very tough) Miguel Contreras in the sixth round of a scheduled eight-rounder; Vargas (2-0, 2 KOs) scored a one-punch KO against game Julio Cesar Martinez 46 seconds into the second round of their scheduled four-rounder.

Muratalla, a 25-year-old from Fontana, California, is knocking on the door of contender status but needed to make the kind of statement that would embolden his trainer (Robert Garcia) and promotional company (Top Rank) to advance him from eight-round bouts to 10-rounders in 2023. Muratalla delivered by dominating Contreras (12-2-1, 6 KOs), a competent boxer who lived up to his “Caveman” nickname by remaining upright under a fusillade of accurate power punches.

Muratalla controlled the distance and pace of the opening two rounds with his jab and footwork but then increased his aggression and punch output in Round 3, battering Contreras with an assortment of power shots while blocking any return fire from the 24-year-old native of Bakersfield, California.

Contreras hung tough in Rounds 3 and 4 and even tried to pressure Muratalla in Round 5, but his spirit and steam was sapped by a ruthless body attack. By the end of Round 6 Contreras was out of gas and overwhelmed by Muratalla. Referee Michael Ortega waved it off with 38 seconds left in the round.

“I don’t know where they put me, but I want to be next,” Muratalla said about where he stands in the 135-pound division during his post-fight interview. When asked if there was a specific name he’s targeting he mentioned a fellow fringe contender who has a little more experience and who scored an impressive stoppage against former 130-pound champ Miguel Berchelt in his last fight: “(Jeremia) Nakathila, I think a win against him can get me (ranked) where I want to be.”

Vargas, one of three fighting sons of former two-time junior middleweight champ Fernando Vargas, had a much shorter night. The 18-year-old former amateur standout boxed well from a distance in the opening round against Martinez (1-1, 1 KO), a 19-year-old from South Bend, Indiana, and then showed that he can punch well in Round 2 when his game opponent tried to take the fight to him. A left hook to the body followed by a perfectly timed hook to the chin instantly dropped Martinez flat on his back where referee Allen Huggins waved it off (47 seconds into the round) without a count (which was smart given that the back of the fallen fighter’s head hit the bottom rope).

ONE PUNCH. OUT COLD.