Natasha Jonas: I can’t look past someone of Dicaire’s caliber 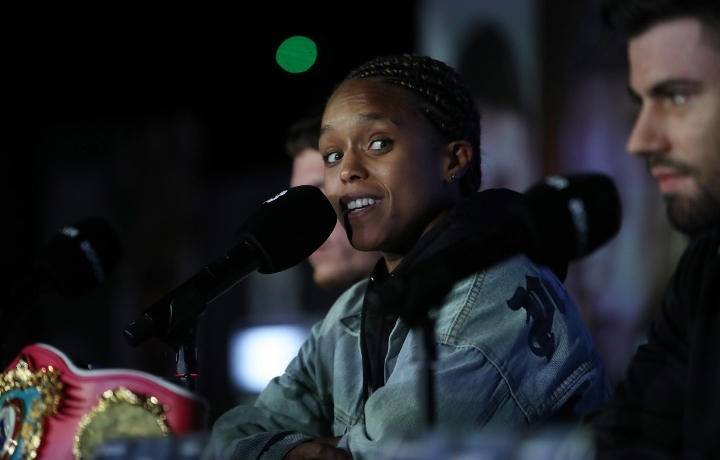 For any fighter in the world, a chance to fight for a belt previously owned by the best pound-for-pound fighter on the planet would be a chance to measure oneself against that kind of greatness.

But Natasha Jonas, the one fight that matters is the one she needs to win to prove she belongs at the top of her division first, before aiming for greatness elsewhere. And that fight takes place this coming Saturday, when Jonas (12-2-1, 8 knockouts) takes on Canada´s Marie Eve Dicaire at the Manchester Arena with three title belts at stake to go along with the vacant Ring junior middleweight belt left behind by Claressa Shields due to inactivity.

Shields, the current No. 1 female fighter on the planet, was understandably upset when The Ring declared that title vacant, but Jonas is so focused on the challenge at hand that she claims she doesn’t have time for Shields’ temper tantrums.

The search for a worthy challenge was tough for Jonas.  In a short career that spanned more than a few weight divisions in search for bigger opportunities, Jonas tried and failed to win belts at junior lightweight and lightweight, but lately she may have found her place in the boxing universe in the junior middleweight division, in what is definitely a dramatic jump in weight.

The jump had one simple justification for Jonas.

“The reason why I made jump to 154 is basically opportunity,” she said. “Katie had a two-fight contract with Serrano. (Current Ring junior welterweight champion) Chantelle (Cameron) was in a tournament with other champions. McCaskill was having another fight. That kind of left me with no options. Junior lightweight is a weight I can make, but I just don’t perform well at it. I didn’t want to go back to that. So this left me with the opportunity to move to 154, and with Claressa going to fight at 160, one of the belts (WBO) became vacant. So that made sense, and now I am very comfortable at the weight, but it’s not just a case of eating more or training less.”

Jonas did make the jump and faced Uruguay’s Chris Namus in her maiden voyage at 154, but she only weighed a quarter pound over the welterweight limit for that fight, raising questions about her ability to carry her power and resilience against bigger fighters.

Jonas claims that it is all part of a very well-laid plan.

“There is a lot of science that goes into my camps, in terms of how I want to perform at that weight. So I have to be not only heavier than I want to be, but also know how to carry that and perform for 10 rounds. I do work in my camp mostly with the weight I will be in the ring, and that just helps to see how you go. It does give me an advantage, I do feel it gives me an advantage. I have been quite fortunate that (Patricia) Berghult and (Chris) Namus were also a lot under the 154-pound limit for our fights. But it does feel as an advantage, and maybe it’s not even an advantage, it’s that I feel physically better being lighter. I think if I went as high as 154 or 153 pounds it would be detrimental to my performance. So I am lighter because that’s my optimum weight in training, and that’s why I stay there.”

Her limited resume at the weight earned her the No. 2 spot at The Ring’s Women’s Ratings in her new division, and she will be aiming to leave the top 5 altogether to sit atop the entire division in the champion’s throne formerly occupied by Shields, should she defeat Dicaire, the current No. 1 in The Ring’s ratings due to her longer career at 154.

“It’s great to be No. 2, but that’s one spot off where I want to be. It’s fantastic to be held in such great esteem with someone as great as Claressa, who is a No. 1 pound for pound. It’s great to be categorized in that same category,” said Jonas, who will have an additional challenge in Dicaire that she had to work hard to get around. 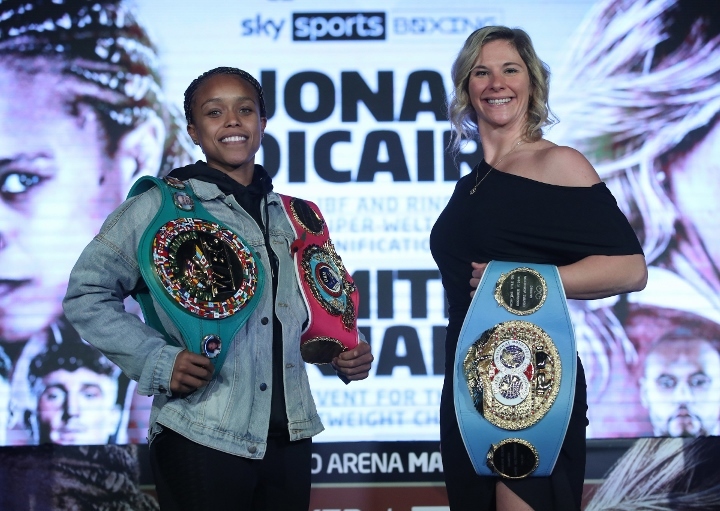 “You don’t really go into many details training for southpaws, because not too many people are southpaw, so to have a whole camp in preparation for a southpaw has been very interesting,” said Jonas, discussing her preparation for this fight in particular. “Learn new skills, watch and develop techniques from other people. I obviously study my opponents and try to capitalize on my strengths as well as work on their weaknesses. I do feel that speed and accuracy and power are my strengths. I read somewhere that she thinks she has the size advantage, which is true if we’re talking about weight. But I still believe that, because of the way I prepared myself, that I carry my power that I’ve carried since I was a junior lightweight and all the way up. So, yes, speed, accuracy and power, as well as boxing IQ. That’s what I believe my strengths are.”

Jonas’ strengths will clash against Dicaire’s experience as a career-long welterweight contender and junior middleweight titlist (who coincidentally also claimed her first title belt against Namus, in 2018). But with only one stoppage win in 18 victories (against only one loss, to Shields in 2021), Dicaire will likely not quite enough power to worry Jonas about a possible stoppage loss.

Still, the former trailblazing British Olympian and amateur standout has learned the hard way that every opponent should be taken seriously.

“I am expecting the best version of Dicaire, because that’s what I’ve prepared for. So whether she wants to go on the back foot and counter, or whether she wants to come on the front foot because she feels she has the size and strength advantage, I am prepared for that. I know she’s a good boxer, I know she’s smart, she has a physical size over me. They say she has shots she’s good at throwing, but like with anyone, I just believe that I am better and I believe in what I’ve trained myself in camp to do will overcome the best version of her.”