On this day: Marvelous Marvin Hagler outsmarts and outlasts Roberto Duran in a memorable clash 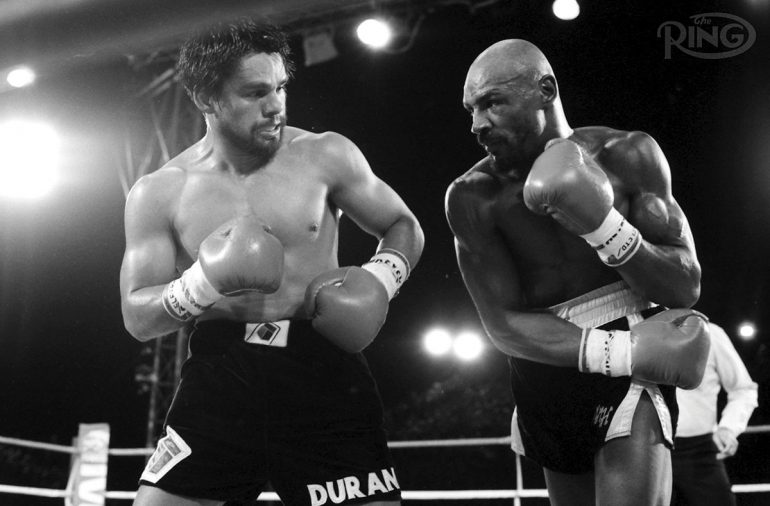 Roberto Druan was not a natural middleweight, nor was he in his prime by the mid-80s but his ring savvy (on display vs. Marvin Hagler) enabled him to compete. Photo / The Ring Magazine/Getty Images
10
Nov
by Diego Morilla

One of the testimonies of how great the four-way rivalry was between the “Four Kings” of the ‘80s is the fact that almost every single fight between them could have gone either way at any given moment.

The November 10, 1983 fight between middleweight champion Marvin Hagler and challenger Roberto Duran is one of the most dramatic examples of how close they all were in terms of pure talent, power and boxing skills.

Panama’s Duran was attempting to become the first four-division world champion in boxing history against Hagler, who had beaten Alan Minter by third-round technical knockout in 1980 to lift the middleweight belt in a fight that was as violent inside as it was outside the ring, where one of the most memorable post-fight riots took place.

Being one of the most avoided fighters in the middleweight division earlier on in his career, Hagler had difficulty scoring his dream mega-bout as a champion, but after much-discussed possible defenses against Sugar Ray Leonard and Thomas Hearns failed to take place, Duran stepped up for his chance to make history in what would be Hagler’s eighth defense of his title, his seven previous defenses all ending in stoppage wins.

With so much on the line, and (unbeknownst to the fighters back then) with one of the last few chances to produce a 15-round championship bout, Hagler and Duran gave us a memorable fight that featured all the drama that one could have expected.

Duran, still the reigning junior middleweight champ after his destruction of Davey Moore less than six months earlier, came to the Caesar’s Palace Hotel in Las Vegas ready for another war, but instead chose to fight from a distance, engaging in a more tactical fight that suited Hagler in a much better way. Duran’s punching power was felt by Hagler earlier on, but the champ also realized that he was fighting a superb defensive fighter as well, and had to make many adjustments to lure Duran out of his defensive shell and leave him open to counterattacks.

Going into the thirteenth round, Duran was surprisingly ahead, and Hagler sensed that. With his title and his pride on the line, Hagler surged in the final two rounds to retain his belt by a close but unanimous decision, with scores reading 146-145, 144-143 and 142-141.