Sunny Edwards: “I’m ready to swim with the sharks. I AM the shark.” 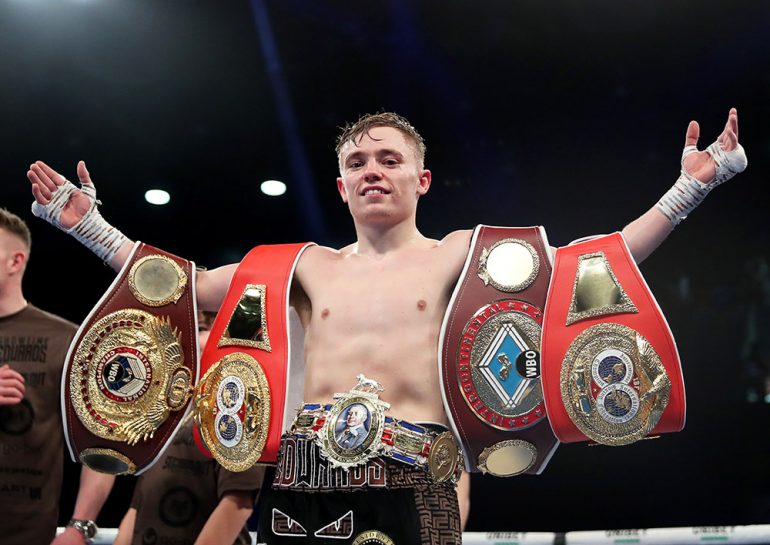 Quick-fisted IBF flyweight titleholder Sunny Edwards has long called for a unification with WBC counterpart Julio Cesar Martinez. The two were tabbed to meet somewhere in either the United States or Mexico, with a working date of October 22. However, similar to how Terence Crawford vs. Errol Spence Jr. rumbled on for several weeks and ultimately fell apart, so did Edwards-Martinez, much to the Brit’s chagrin.

“I just think they were playing with my emotions. I don’t think they wanted the fight; I think their behavior has shown that time and time again,” Edwards (18-0, 4 knockouts) told The Ring. “It is a massive money fight. I was getting offered — and accepted — very, very good money. And I know him, fighting at home with his own promoter, coming off the big fights he’s had, that he would be getting even more than me. And he was turning it down, wanting more, and that’s why the fight didn’t happen. I think he was asking for between £750,000 and a million pound (about $865,000-$1.15 million) to fight me, which I think is mad.

“Martinez holds very little respect for me — he did. He could have let it slide and said [negotiations] broke down, but he said I pulled out. I cried when that fight went through, and I’ve got him saying I pulled out.”

Instead, Edwards, who is rated No. 2 by The Ring at 112 pounds, will turn his attention to the dangerman of the division, Felix Alvarado, at the Sheffield Arena in Sheffield, England, on Friday.

On paper, it appears to be the classic boxing matchup of boxer vs. puncher: Edwards is one of the game’s best pure boxers, while Alvarado is regarded as one of the most fearsome punchers in boxing’s lower weights.

“I think he’s a harder fight than Martinez,” said Edwards. “I think he’s more dedicated and more disciplined. He’s very good, he’s very crude, he’s very powerful. He throws a lot of shots, works hard. I feel like he starts slightly gassing at the back end of his fights, especially his more recent fights.

“He looks at me like everyone in the division and moves up because none of the [junior flyweight] champions wanted to unify against him, because he’s dangerous — I relish that.”

However, Edwards questions the level of opposition on which the Nicaraguan has built his reputation.

“I do think when he’s stepped up in class, he’s got beat by [Juan Carlos] Reveco and [Kazuto] Ioka,” said the 26-year-old. “In my eyes, if you look at his record, yeah, it’s impressive knocking out a load of people, but there ain’t no name on his record that he’s beat that stands out to me as, ‘Oh, you beat him, that’s a good win.’ That’s when I start questioning all these knockouts.

Edwards is ready to cast his net further afield and go big game hunting in 2023.

“I don’t need a protection program; I’m ready to swim with the sharks. I am the shark. I’m the number one in the division,” he proclaimed. “Just because I do it in a slightly more poetic way, where I skin you inch by inch for 36 minutes rather than try to put a hole in you. I know who is more exposed. People rather get into a back-and-forth fight with a chance of knocking each other out than against the kid who has so far been basically impossible to hit.

“I want to be a part of some events. If I can get a big fight or unification, of course, but right now it doesn’t seem likely. I look at all of them junior bantamweights and they’re fights I could and should be getting, even some of them bantamweights.

“The one I would look to explore most after Alvarado is ‘Bam’ Rodriguez because of the level of opposition, the plaudits and the credit you’d get from that fight. That’s a fight I need. It’s also two English-speaking fighters, where we can have it back and forth. He’s also very humble and respectful, but I’m sure I could drag something out of him.”

Alvarado, who is rated No. 9, lost world title attempts to Ioka (UD 12) and Reveco (UD 12) early in his career. “El Gemelo” rebounded with 15 wins to secure a shot at the vacant IBF 108-pound belt. He stopped Randy Petalcorin (TKO 7) in October 2018 and made two successful title defenses. The aggressive 33-year-old vacated his title to move up in weight, in search of further glory.