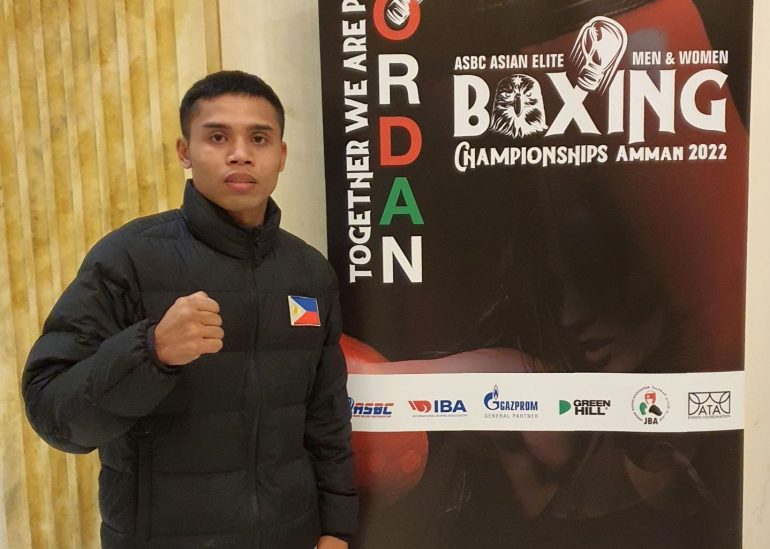 Paul Julyfer Bascon is still trying to process just what happened, days after his first international tournament at the Asian Boxing Confederation (ASBC) Championships came to a premature halt.

For close to two minutes on Friday, the 25-year-old Bascon of Davao del Norte, Philippines was able to control his jitters and remain competitive against Uzbekistan’s Adkhamjon Mukhiddinov in their lightweight bout in Amman, Jordan. Midway through the round, he stepped in with a straight right hand to the body, and was knocked off balance after running into a glancing right hand from the Uzbek southpaw.

Bascon took the count from Bosnian referee Tina Poletan, and looked over to his corner for further instructions. Without any further prompts, Poletan waived the bout off, drawing an incredulous reaction from Bascon.

One of the worst stoppages I’ve ever seen at the ASBC Championships this evening, as 🇺🇿’s Adkhamjon Mukhiddinov beats Paul Julyfer Bascon of 🇵🇭 via first round RSC. You’d think after all the warnings, amateur boxing might try to get its act together. Apparently not pic.twitter.com/NjHeLU2nAX

The tournament was supposed to be the coming out party for Bascon, who has been on the Philippine national team for three years, waiting in line behind 2016 Olympian Charly Suarez for his chance to shine. In an instant, six months of preparations were erased.

“I thought I had figured out the Uzbek and was landing some clear punches,” said the 30-bout veteran Bascon, who hails from the Davao del Norte region of the Philippines

“I was feeling alright and was so disappointed and very shocked.”

The video gained traction on social media after amateur boxing analyst Taylor O’Higgins shared it on Twitter, calling it “one of the worst stoppages I’ve ever seen.”

Those sentiments were shared by IBF flyweight titleholder Sunny Edwards, who labeled Poletan a “f—king clueless referee,” adding “Amateur boxing is more rotten than Professional.. and that’s saying something.”

Russ Anber, a top trainer and cutman based in Canada, was similarly befuddled by the decision.

“Amateur boxing just can’t help itself. It just wants to be corrupt and evil! I have been in this game 43 years and it never changes!,” said Anber.

Amateur boxing just can't help itself. It just wants to be corrupt and evil! I have been in this game 43 years and it never changes! Refs and judges on the take and/or incompetent, and the fighters pay for it. He never gets hit! No wonder they want to ban boxing from the Olympics https://t.co/4pRSQStKFR

Ed Picson, who is president of ABAP, which oversees amateur boxing in the Philippines, tells The Ring that there is little recourse that they can take because the International Boxing Association (IBA), which rebranded its name from AIBA in December of 2021, does not allow protests for referee stoppages.

Picson says officiating like this threatens amateur boxing’s future at a time when the IBA has once again been barred from running qualifying events and Olympic competitions for the 2024 Olympics, just as was the case for the Tokyo Olympics. Instead, the International Olympic Committee (IOC) will run all boxing competitions at and leading up to the Paris Games.

“This is, to say the least, unfortunate. At a time when amateur boxing is teetering on the brink of irrelevance in the Olympic program, this kind of inexplicable decision by the referee sends the wrong message. The situation is crying out to be addressed as soon as possible,” said Picson.

Boxing is facing the possibility of exclusion from the 2028 Games in Los Angeles due to failures to implement reforms that were ordered by the IOC, which had voiced concerns over corruption allegations and dubious officiating.

Messages to the tournament’s technical delegate Angel Luis Villareal Jr. and ASBC Executive Director Ali Salameh were not responded to.

For Bascon, all he can do is continue to look to the future. He hopes to be able to compete in the upcoming Southeast Asian Games, which take place in Cambodia this coming May, as well as other smaller competitions and training camps.