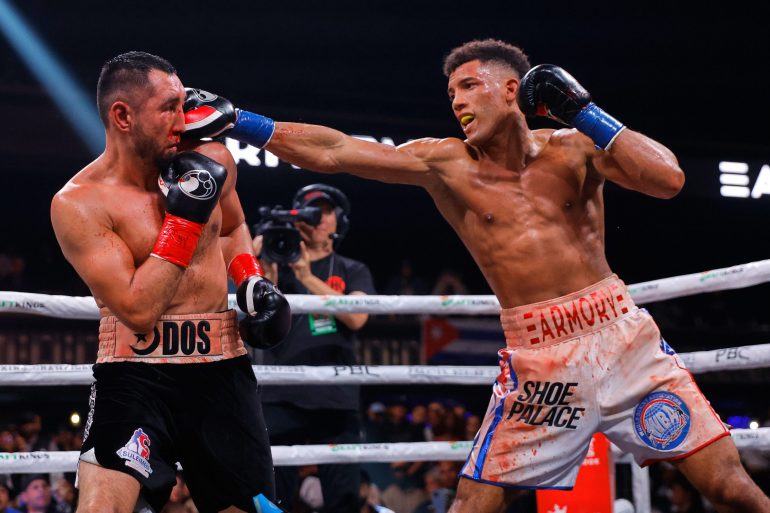 He doesn’t mind it. David Morrell knows how good he is. The rangy, 24-year-old Cuban southpaw can bide his time and wait for the Canelo Alvarezs, and David Benavidezs and Caleb Plants of the 168-pound division, while in the meantime chew on roughhewn fighters like Aidos Yerbossynuly.

It’s what Morrell did Saturday night, stopping the previously undefeated Yerbossynuly at 2:34 of the 12th round on Showtime’s Championship Boxing from The Armory in Minneapolis, Minnesota.

In doing so, Morrell (8-0, 7 knockouts) retained his secondary WBA super middleweight belt, while Yerbossynuly (16-1, 11 KOs) was taken to a local Minneapolis hospital for observations.

“I told everyone at the press conference that the fight is mine,” Morrell said. “(Yerbossynuly) is strong…but it’s me, man. A knockout is a knockout, so if it’s in the eighth or 12th round, it’s whatever. It’s a knockout anyways.

“I want (David) Benavidez, but I don’t care. I’m ready for everybody.”

Morrell, The Ring’s No. 6 super middleweight, had dominated Yerbossynuly through much of the fight with lead lefts, right hooks to the body and right uppercuts. Yerbossynuly had never reached the 12th round before and the first time he did, he wasn’t able to stand through much of it.

THE PREDATOR BECAME THE PREY 😈@OsvaryJ knocks out Yerbossynuly in round 12 to stay unbeaten 🔥#MorrellYerbossynuly pic.twitter.com/5DNGM1ywpV

With 2:45 left in the fight, Morrell knocked him down with a straight left. With :49 left, Yerbossynuly could barely stand, hugging Morrell against the ropes. When referee Tony Weeks told Yerbossynuly to let go, he still hung on, prompting to deduct a point from Yerbossynuly. 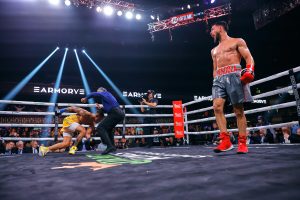 Brian Mendoza pulled off the surprise of the night by stopping former unified junior middleweight titlist Jeison Rosario with a fifth-round knockout at 2:36.

“I think it’s time to say goodbye,” Rosario said. “I’m not fighting anymore. I’m going to retire. I have accomplished a lot, and it was good, but my career stops here.

“The most important thing is that I have my health. I feel a little bad that I couldn’t give the Dominican people the result they hoped for, but I love you all and I thank you for all the support through the years. I’ve got to give props to Brian Mendoza. He came and did his job.”

“They thought I was a fill in,” Mendoza said. “I’ve been in the gym for seven months straight since I fought on March 26. This was anything but a last-minute call. This was truly where opportunity meets preparation, and I couldn’t ask for anything better.

“What an amazing opponent for me to show off all the work I’ve done, I couldn’t be more thankful. You watch tape on the guy, and you see what they’re open to…I saw an opening and I went for it. I was just beyond ready for anything.

“Those are the adjustments you work on in camp. He kept slipping the straight line I was throwing. He was ducking and I was like, let’s see if this works. I sat on the punch and let it go, those were the instincts I worked.”

“I felt in this fight I controlled him,” Czerkaszyn said about Gallimore. “He is very fast and he wanted to catch me with a hard punch, but I wanted to feel the distance. I know fighting in the U.S. is a big opportunity.

“It’s my style. I like to punch like that, fast and sometimes throw a strong punch. I felt that he is a tough fighter. He controls his punches. Good experience, he’s very slick and dangerous. He can punch.”

Czerkaszyn had his way early on. The most significant punch came on a Czerkaszyn right hand with 1:12 left in the fifth. Gallimore was rattled by the shot, and Czerkaszyn, working out of the southpaw stance, kept charging. Gallimore survived the round, but through the halfway point of the fight, it was apparent Czerkaszyn was outworking Gallimore.

“I started a little slow in there tonight,” Gallimore admitted. “I couldn’t get my combinations going. He outworked me and they gave him the fight. That’s just how it is. It wasn’t my night. He never had me hurt in the fight. He did hit me with some good shots, but I wasn’t hurt or worried at any point that I couldn’t continue.”

Gallimore had no complaints.

“I thought the scores were pretty fair for the most part,” he said. “I couldn’t get off. (Czerkaszyn) was holding a lot and the ref didn’t do anything about it. I’m not saying it was the ref’s fault I lost, but he was holding me and keeping me from getting off. It was frustrating.

“I’ve got to think about what’s next (for my career). I’m still in the heat of the moment, but I’ll make the right decision about my future in a few days after I’ve had some time to think about it.” 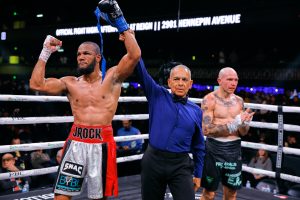 The rematch between junior welterweights Kent Cruz (16-0-3, 10 KOs) and Enriko Gogokhia (13-0-2, 8 KOs) finished in an eight-round draw, which is how their first fight ended.