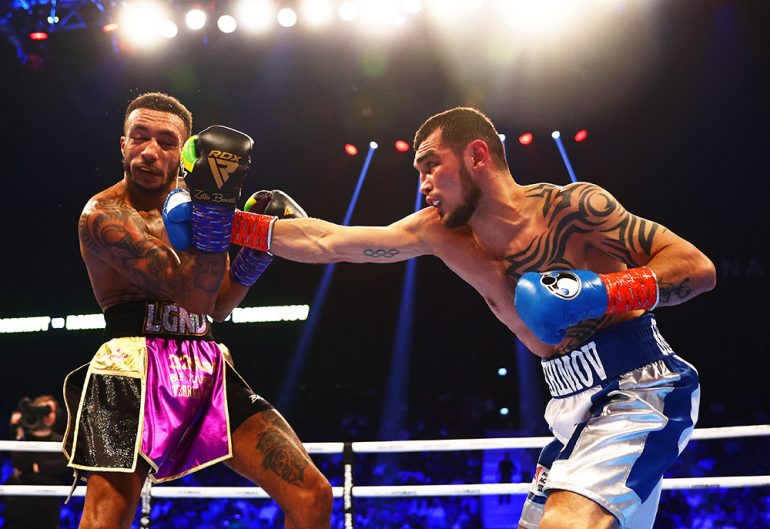 Rakhimov (right) started slow but eventually overwhelmed Barrett and forced his corner to throw in the towel. (Photo by Francois Nel/Getty Images)
05
Nov
by Doug Fischer

Shavkatdzhon Rakhimov overcame a rocky start against sharpshooting counterpuncher Zelfa Barrett and wore down the European champ to a ninth-round stoppage on the Dmitry Bivol-Gilberto Ramirez undercard on Saturday in Abu Dhabi, becoming the first pro boxer from Tajikistan to win a major world title. 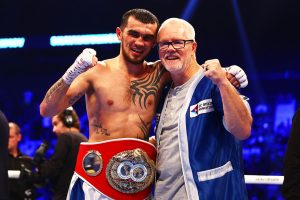 Rakhimov (17-0-1, 14 KOs), The Ring’s No. 3-rated junior lightweight, earned the vacant IBF belt with his gritty effort and has already signed to face the former beltholder Joe Cordina (Ring’s No. 4 contender), who was stripped of the title when an injury prevented him from making his mandatory defense against the 28-year-old Tajikistani pressure fighter.

Barrett (28-2, 16 KOs), a talented 29-year-old boxer from Manchester, England, scored a beautiful third-round knockdown (courtesy of a well-timed right uppercut counter) and beat Rakhimov during the early rounds exchanges, but the relentlessness of the Freddie Roach-trained fighter gradually took the strength out of his legs.

By Round 9, Barrett could not keep Rakhimov off of him and the towel was thrown into the ring from his corner. The referee waved the contest off at 2:35 of the round.