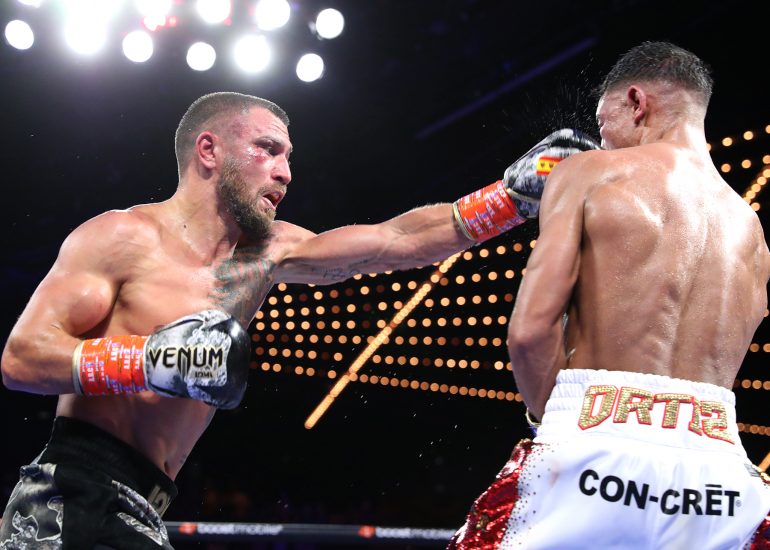 Vasiliy Lomachenko scores a lunging left on Jamaine Ortiz during their lightweight fight at The Hulu Theater at Madison Square Garden on October 29, 2022. (Photo by Mikey Williams/Top Rank Inc via Getty Images)
29
Oct
by Ryan Songalia

Vasiliy Lomachenko showed he still has greatness in him after nearly a year out of the ring, defeating a determined Jamaine Ortiz by unanimous decision on Saturday night.

Ortiz, who is eight years younger than Lomachenko at 26, was fighting for the first time in a 12-round bout and seemed to gas out as the far more experienced Lomachenko stepped up his attack in the final third of the bout. Lomachenko swept each round from Round 7 onward on two of the scorecards to march toward victory.

Ortiz, who had spent five weeks in camp with Lomachenko prior to the Ukrainian fighter’s previous bout against Richard Commey last December, came out hot in the first two rounds, using his youth and speed to get the advantage. Lomachenko had to deal with an abrasion under his right eye from the first round on, having been scuffed by tape.

Lomachenko began picking up the pace in the sixth, hurting Ortiz with a straight left to the body and wearing him down with pressure. Ortiz had swelling to deal with under his left eye, which his corner seemed unprepared to deal with due to an absence of an enswell. 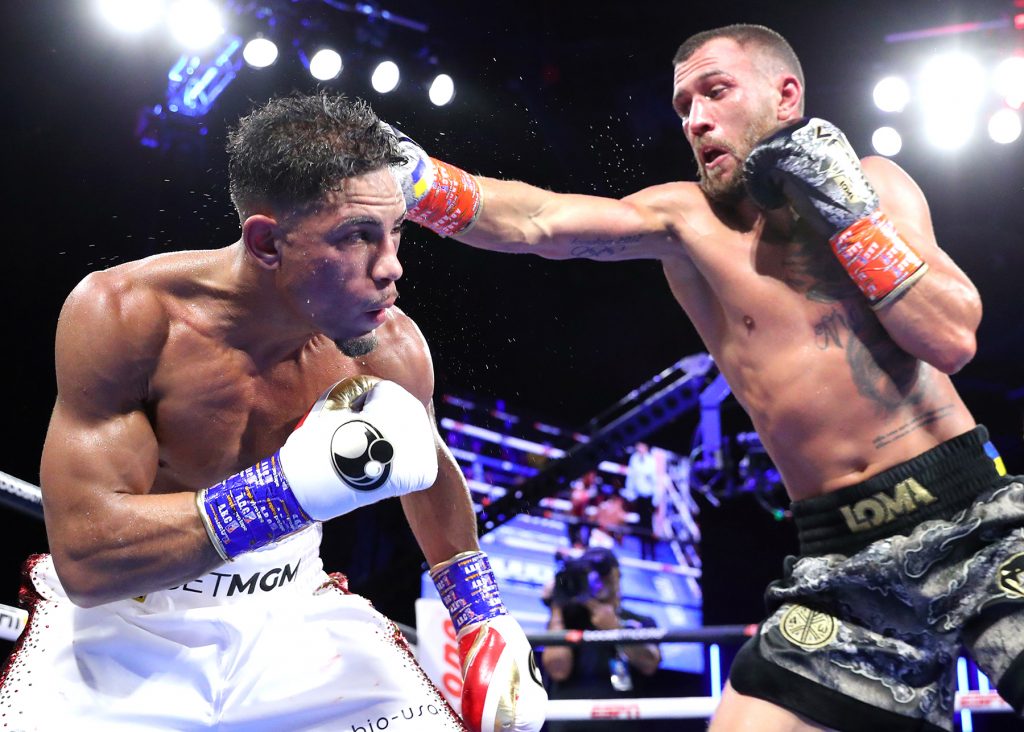 Ortiz, who earned the opportunity after sending former WBO junior lightweight titleholder Jamel Herring into retirement with a 10-round decision win in May, had success in the seventh round after switching to southpaw, but he soon switched back to orthodox.

The win clears the way for Lomachenko to face undisputed lightweight champion Devin Haney, who is also co-promoted by Top Rank. Haney (29-0, 15 KOs) was in attendance and appeared underwhelmed by the former three-division champion’s performance.

“I think it wasn’t the best performance, but I know if me and Loma were to fight, we’d see a better version on the night,” said Haney.

Lomachenko joked to Haney that he looked to be far bigger than a lightweight fighter, but appeared eager to get the chance to fight for the chance to become undisputed for the first time.

“You know what motivated me. Four belts!” said Lomachenko.

“I’m ready for any option.”

Top Rank CEO Bob Arum called Haney-Lomachenko “the fight to make,” indicating that he will work to put that deal together next.

“We will do everything we can to make the undisputed championship showdown that all fight fans want to see. They are the world’s premier lightweights, and it would be a fantastic battle,” said Arum.