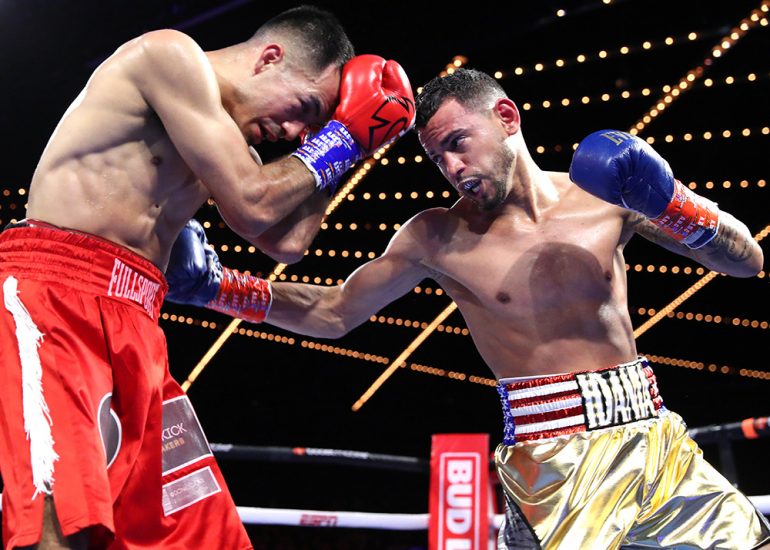 Ramirez (11-1, 7 knockouts), a two-time Olympic gold medalist from Cuba, dropped Romero once in the first with a straight left before finishing him off with a pair of straight left hands along the ropes in the ninth which compelled the referee to stop the bout at the 2:20 mark. Ramirez often appeared to be trying to force his way to a knockout with lead left hands, but rediscovered his jab late in the fight to set up the stoppage.

“We know that Matias is a fighter who is slick, who knows how to survive inside the ring, and that was his plan. I hurt him early, but then we tried to get him out early. And then [trainer] Ismael Salas, who is my strategist… he is a chess master. He’s moving the pieces in there, and finally we were able to do it properly and get him out of there,” said Ramirez.

Ramirez was absolutely dominant according to Compubox stats, landing 46.8 percent of his power punches, while outlanding Matias 129-32 in total punches.

The win clears the way for the 28-year-old Ramirez to face former 122-pound titleholder Isaac Dogboe on Feb. 3 for the WBO featherweight title that Emanuel Navarrete will vacate to move up to weight to face Oscar Valdez for the WBO junior lightweight title which Shakur Stevenson was stripped of after missing weight for his most recent bout against Robson Conceicao.

“I think the result speaks for itself, I got the stoppage. In the end, if Navarrete is not the champion at 126 pounds…then I’ve got next at 126 and I want that belt,” said Ramirez, who now resides in Florida.

Matias, who had never previously been knocked down, took the fight on ten days’ notice to step in for former WBO junior featherweight titleholder Jessie Magdaleno, who withdrew with a hand injury.