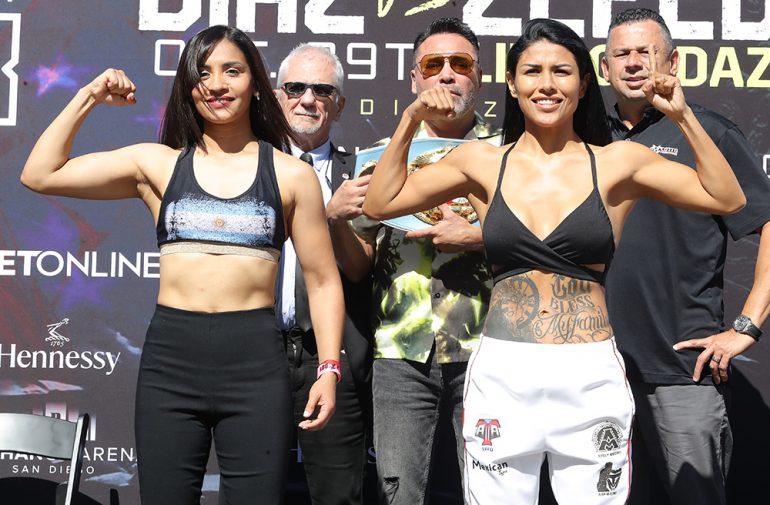 SAN DIEGO – Arely Mucino was not going to allow Leonela Yudica or a hematoma get in the way of capturing a world title belt.

Mucino (32-3-2, 11 knockouts) won a hard-fought split-decision over Leonela Yudica on Saturday before a partisan crowd at the Pechanga Arena.

By the end of the second round, Mucino developed a small hematoma on her left temple, likely from the right hands from Yudica or an inadvertent clash of heads. As the bout progressed, trainer Joel Diaz did an admirable job of not allowing the hematoma from getting worse.

Both had their moments in the fourth round, but Mucino’s vicious attack consisting of overhand rights and uppercuts found their mark.

Despite having to deal with the hematoma, Mucino continued her aggression into the second half of the fight. Yudica continued to target the hematoma, landing an occasional right hand flush to the temple, but Mucino outboxed and outlanded Yudica on the inside.

Late in the fight, Mucino’s left eye was almost shut, but she continued her onslaught of combinations to the head and body. Yudica continued fighting back and, while she did have some success fighting off the ropes, was not able to hold off Mucino.

Both went at it during the final moments of the 10th and final round and embraced each other once the final bell sounded to end the fight.

With the win over Yudica, 33-year-old Mucino became a three-time world titleholder, all at 112 pounds. She is currently ranked No. 3 by The Ring in its Female flyweight rankings and has not lost since dropping a unanimous decision to Yessica Chavez in September 2015.

Yudica, who resides in Chimba, Argentina, drops to 17-1-3 1 NC, 1 KO. She had successfully defended the IBF title three times prior to the loss to Mucino.