Ring Ratings Update: Deontay Wilder advances to No. 1 at heavyweight 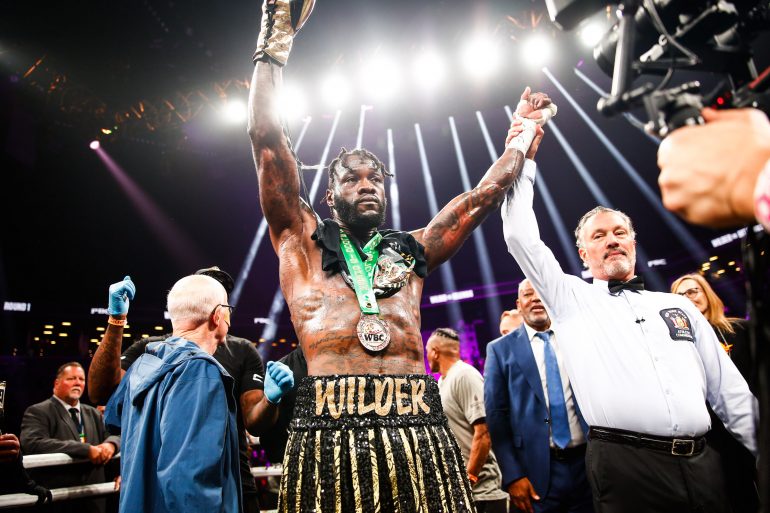 The Ring Women’s Ratings Panel had more to discuss and debate this month than the men’s panel, but there were highlights (and some “lowlights”) – mainly from the busy day of October 15 – on the male side of the street, including Deontay Wilder’s explosive return, Devin Haney’s bloody rematch domination of George Kambosos, Caleb Plant’s KO-of-the-Year candidate stoppage of Anthony Dirrell, Edwin Rodriguez’s surprising (to some) master class against Gary Antonio Russell, and (ugh) Conor Benn’s positive VADA test. 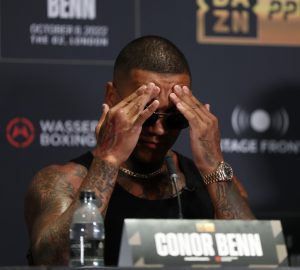 Let’s start with the downer news. Benn’s anticipated Oct. 8 catchweight showdown with Chris Eubank Jr. was canceled after he tested positive for Clomifene, a female fertility drug that significantly increases testosterone in men and is on the World Anti-Doping Agency’s banned substance list.

The Ring Ratings Panel debated immediately dropping Benn from the welterweight rankings, where he holds the No. 9 spot, or waiting until more information comes from the ongoing UK Anti-Doping (UKAD) investigation and the result of the B sample taken by Voluntary Anti-Doping Association (VADA).

It began with panelist Tris Dixon, who simply asked:

“Please can you clarify what happens with Benn?”

“My initial reaction was that we need the B-sample result before pulling the trigger,” said Gray. “Canelo (eventually) and Luis Nery were removed from their respective divisions after A and B samples came back positive from VADA. [Editor-In-Chief’s note: And in Alvarez’s case he was suspended by the Nevada State Athletic Commission, although also absolved of wrongdoing by the same governing body.]

“Now, few people believe Benn’s B sample will come back with a different result – it’s the same damn test – but he has the option of having it analyzed. IF we removed Benn and the B sample SOMEHOW came back negative, then that wouldn’t be a good look. Several years ago, two Russian Olympians failed A samples and passed B samples, albeit with a different testing agency, and no further action was taken.

“I also read a report from (Dan) Rafael stating that Benn can refuse to publicly release the results of the B sample, which I find extraordinary. If that B-sample result is not disclosed within a specific timeframe (what would that be?), then I also think he needs to be removed from the ratings.

“I’m not a scientist (ironically my wife is, but I still know less than nothing). I’m not pretending to be something I’m not, so if my reasoning is flawed, I welcome someone to educate me. This is a personal take with limited knowledge.” 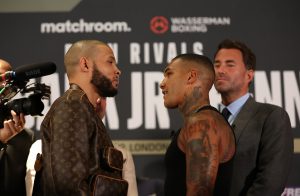 Dixon replied: “It’s interesting. I also believe someone has to ask for the B sample to be tested. And I don’t believe anyone has asked. And, frankly, I don’t think they will. Benn-Eubank in Saudi before Christmas?”

Responded Gray: “Yeah, if the B sample just fades into the background, I’d say Benn needs to come out. Not having that tested, or providing an explanation, indicates guilt. We’ll see what the investigation turns up.

Panelist Adam Abramowitz was in favor of dropping Benn now.

“Right. We may never hear about the B sample unless it exonerates him,” he said.  “I’d remove him. If there is evidence that clears him, we can reinsert.”

“I’d also remove him from the rankings right now,” Sugiura said. “It’s hard not to, after canceling the whole event like that just as Martin stated. But, again as always, consistency is important. If we wait for the B sample, I’m OK too.”

“This is all interesting. I suppose what I’m getting at is what happened last time it happened… what did The Ring do with (Oscar) Valdez, Canelo, et al? Because we can’t have one rule for one and one for someone else.”

Gray re-noted that Valdez and Alvarez had failed A and B samples.

Panelist Anson Wainwright was in favor of holding off.

“I’d be inclined to wait until the B sample comes out or at least let things play out (over the next few weeks),” he said.

Your Editor-In-Chief was also inclined to wait and see.

Gray brought up everybody’s favorite boxing-debate subject matter – the pound for pound rankings: “I think we should at least open up the floor for Devin Haney to move into the P4P ratings. Thoughts?”

Replied your EIC: “I don’t have an opinion on the P4P other than Shakur Stevenson, Chocolatito, Stephen Fulton and maybe Jesse Rodriguez, have just as strong of a claim to crack the mythical rankings as Haney. It is what it is. We can’t worry about Haney’s feelings or particular sects of Boxing Twitter/IG.”

Replied the out-going managing editor who will remain on the Ring Ratings Panel:

“Yeah, I was just gauging the overall opinion. I’m as convinced as ever of Haney’s talent and potential ceiling, but I’m far less convinced that he’s beaten the requisite opposition to land a spot on the P4P list.”

Heavyweight – Deontay Wilder advances to No. 1 after scoring a opening-round one-hitter-quitter against unrated veteran Robert Helenius. Frank Sanchez remains No. 9 after scoring a ninth-round TKO of unrated Carlos Negron. 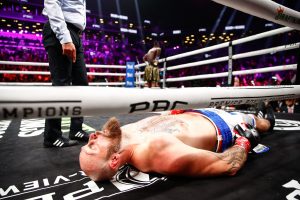 “Deontay Wilder reminded us just how devastating that right hand of his is when he nearly decapitated Robert Helenius in the first round,” said Wainwright. “Wilder to No. 1. Frank Sanchez stopped Carlos Negron in nine rounds. Although not a statement win, I could see him going up one over Hrgovic, who didn’t impress last time out.”

Panelist Martin Mucllahey: “Wilder to No. 1. Looks pretty clear only one guy can stand up to his power so far. I would put Sanchez over Hrgovic for now, I thought he under-performed less than Hrgovic against Zhang, who I had winning that fight.”

Super middleweight – Caleb Plant remains at No. 2 following a ninth-round KO of Anthony Dirrell, who drops to No. 7.

“Caleb Plant scored a highlight-reel knockout over Anthony Dirrell,” exclaimed Wainwright. “Excellent win for Plant, who hadn’t fought since losing to Canelo last year. Plant deserves a move up but I don’t see him above Benavidez at this point. It closes the gap though. That might be it for Dirrell, who can drop to No. 6.”

Mulcahey argued that Dirrell should drop more in the rankings.

“Man, Dirrell got on the wrong side of Caleb Plant… and his hook! As good as that was, it still came against a 38-year-old he buried and I still have Benavidez above him,” said Mulcahey. “I would put Dirrell lower, to a No. 8 or No. 9 given all these young guns coming up in this division.”

Middleweight – Carlos Adames advances to No. 7 off of a third-round KO of unrated Juan Maciel Montiel.

Junior middleweight – Sebastian Fundora remains at No. 2 following his 12-round unanimous decision over previously No. 10-rated Carlos Ocampo, who exits that rankings. Charles Conwell (17-0, 13 KOs) enters at No. 10. 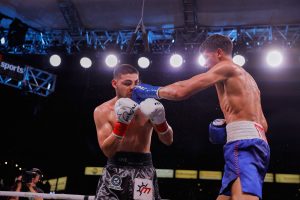 “I could see Fundora going to No. 1 and with Ocampo losing, he can come out, (and we can) bring in Charles Conwell at No. 10,” said Wainwright.

Added Gray: “I can make a case for Castano holding his spot or Fundora taking it. I’ll sit on the fence and let consensus rule. Conwell works for me.”

Added Morilla: “I am on the Castaño side of the fence at 154. I like Fundora but I still want him to face someone with a more solid resume before moving him all the way up to No. 1.”

Added Mulcahey: “Not sure if Sebastian Fundora is leveling off or trying new stuff in the ring. It was not an exceptional performance so I would not move him above Castano, but he still won and looks like a handful for anyone in three weight classes, to be honest. No problem with Charles Conwell entering at No. 10, although I still have a soft spot for Souleymane Cissokho.”

Lightweight – Devin Haney remains champ after his first title defense against George Kambosos, who drops to No. 5.

“Devin Haney once again showed he’s all wrong for George Kambosos Jr., winning a lopsided 12-round unanimous decision,” said Wainwright. “Kambosos to drop to No. 4. Michel Rivera won an eight-round decision over Jerry Perez and stays in the 11-15 range in a stacked division.”

Gray suggested dropping Kambosos to No. 5, which was seconded by panelist Daisuke Sugiura and Yours Truly:

“I agree with Tom that Kambosos should drop to No. 5. I like George a lot, but it’s very clear now that he caught lightning in a bottle with Teofimo Lopez. He’s just a very tough, scrappy contender who might have been lucky to get split-nods over a past-prime Mickey Bey and a former 126-pound beltholder (Lee Selby).” 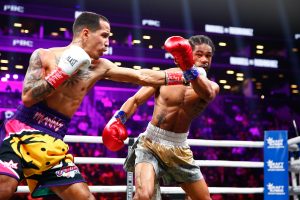 “Emmanuel Rodriguez looked very good through 10 rounds, dropping Gary Antonio Russell before an ugly clash of heads sent this one to the cards,” said Wainwright. “Rodriguez was handily ahead to claim the technical decision. Rodriguez to No. 2 and Russell to drop to No. 7. There’s probably an argument that Rodriguez could go to No. 1.”

Replied Gray: “I like Rodriguez at No. 1. He just beat The Ring’s No. 4-rated contender, it’s that type of win.”

Ye Ole EIC agreed with Gray: “Rodriguez should take the No. 1 spot at bantamweight. He totally outclassed Russell. He should have had a decision victory over Reymart Gaballo. Plus he’s got the scalps of Jason Moloney and Paul Butler on his resume. There’s no shame in getting blitzed by Naoya Inoue.”

Added Mulcahey: “Emmanuel Rodriguez surprised me. I thought he would give Russell problems early then fade… but Russell never found a solution and kept running into big punches. Rodriguez to No. 1 and Russell to drop to No. 7 is good. I think people will write him off too soon and he should rebound as I still see him as having title talent. Love Jason Moloney’s attitude and the way he bounced back from setbacks, and he did last five more rounds with Inoue, but head-to-head tells the tale… even though that was a very close fight.”

Added Daisuke: “Not much to add, but I like Rodriguez to No. 1 too. Such a busy weekend with a lot of notable fights but I thought the win by Rodriguez was one of the most impressive performances against an undefeated rising contender.”

Added Wainwright: “I was very impressed by E-Rod. I really didn’t know what he had left. He told me in the story I had on him before the fight that Russell was ‘basic’ and Rodriguez was able to make him look that way. I have no problem with him going to No. 1 given points pointed out by others before, his resume, quality win over No. 5, and, like Doug said, he should have had the win over Gaballo. The Inoue loss was kind of like losing to Shakur at 130.”

“Slow start for Fernando Martinez but can’t knock the end result with that constant pressure and awkward angles,” said Mulcahey. “Proves he is no fluke, but I agree that he can’t rise above (No. 3-rated) Bam Rodriguez, who is having an amazing year. Ancajas looks on his last legs, still retains muscle memory but a bit of spent force unless Martinez is just a guy who has his number? So No. 10 is a good spot for Ancajas, who can prove himself worthy of it against someone else.”

Email Fischer at [email protected]. Follow him on Twitter and IG at @dougiefischer, and join him, Tom Loeffler, Coach Schwartz and friends via Tom’s or Doug’s IG Live most Sundays.