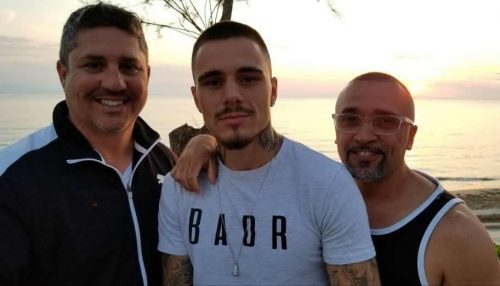 It’s been a rough few weeks for the Australian. Three days after the lawsuits were filed claiming lost wages, Kambosos (20-2, 10 knockouts) lost again to The Ring’s lightweight champion, Devin Haney (29-0, 15 KOs), by wide margins in their rematch on October 16 in Melbourne.

Kambosos owes Kahn a minimum $347,700, with the possibility of additional funds through discovery, and $280,000 to Centeno, according to the lawsuits, making it a combined total of $627,700 that Kambosos owes to his former team.

After Kambosos-Haney I in June, Kahn made sure Kambosos went over to Haney’s dressing room to congratulate him. Davin Haney waded through the pack to make sure he shook Kambosos’ hand as a gesture of good sportsmanship.

“Prior to Peter’s involvement, Kambosos only fought in Australia, so he basically contacted Peter because (Kambosos) wanted to get out of Australia and for Peter to help make him into a star and build a brand, which is what Kambosos became,” said Carl Berry, Kahn and Centeno’s attorney, who has a long track record in boxing, going back to working with Don King from 2001-03, and was the general counsel for Warriors Boxing. “Peter did everything. George for his part won fights, and he did that. As a team, they were able to get George in a mandatory position for the IBF title.

“As a result of the work Peter did, he got Kambosos in position to win, and Kambosos managed to win the fight despite the fact nobody thought he was going to win.

“Subsequent to that, Peter goes about putting the fight together with Haney. He negotiated with all parties, spending significant amount of time, putting that together, negotiating this two-fight deal, with the upside (and a rematch). Peter was able to run it back for a second fight, which Peter covered. Because of that, he’s owed his 10 percent.

“Peter only took 10 percent. Keep in mind, everyone else is charging a third. Their contracts say if you win a title, they get another two years. Peter doesn’t do that with any of his fighters. He only takes 10 percent. It’s a sweetheart deal as far as I’m concerned. Peter brings a lot to the table. 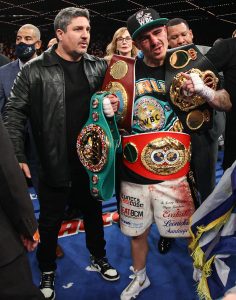 Not many thought George Kambosos would beat  Teofimo Lopez in November 2021 fight at the Hulu Theater in Madison Square Garden. (Photo by Ed Mulholland/Matchroom).

“The progression of George’s career speaks for itself. The work Peter has done speaks for itself. There is a clip out there before their second fight of [Devin] Haney confronting Kambosos about not paying Peter. Then, there is Bill Haney confronting Kambosos about the work Peter does for him after the first fight. Peter just wants to be paid what he’s supposed to be paid. The same thing with Javiel.”

In reference to Centeno, “It’s the same situation with Javiel, because he shorts Javiel the money after he beats Teofimo Lopez, and then he shorted him again for George’s first fight with Haney. Quite honestly, I’ve seen guys shorted before, but this is a little more than what I normally see.

“Have you’ve ever seen where trainers and managers have sought this kind of money from a [fighter] before? To me, this seems quite a bit different from what I’m normally accustomed to seeing in the sport.” 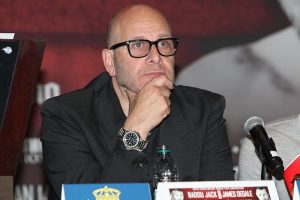 In July 2022, RingTV.com did a story on the kind of year Kahn had to that point and the work he had done in getting Kambosos career-high paydays. Quoted within the story, Hall of Fame promoter Lou DiBella told The Ring, “Relationships with Peter’s fighters are really important to him. When he first started, he began with Don King, and he knows the importance of the relationships with fighters. Peter was very instrumental of getting George the Devin Haney fight. George wasn’t very popular in Australia and Peter and I knew we had to strategize.

In that July 2022 RingTV story, Bill Haney said, “Peter is a good guy and me and Peter were the ones that made the fight happen. The fight wouldn’t have happened if not for Peter. It’s why I told Kambosos that he better appreciate Peter. We’re going back to Australia to defend the world championship. Peter made sure that (stipulation) was made for the rematch.”

According to Kahn’s lawsuit against Kambosos:

“33. Accordingly, the Defendant KAMBOSOS has breached his oral agreement with the Plaintiff PETER KAHN.”

Though they had a handshake agreement, Kambosos acknowledged the deal in a letter to Kahn dated October 3:

“The purpose of this letter is to advise you that the co-management services are no longer required and that the Verbal Agreement has been terminated effective immediately (i.e., from the date of this letter).

“George Kambosos Jr will now manage his own boxing career effective immediately (i.e., from the date of this letter).

“We would be grateful if you could please update your BoxRec profile by removing George Kambosos Jr as soon as possible.

“Please be advised that if you wish to travel to Melbourne, Australia for the October 16th bout it will be at your own personal expense.

“George and Jim Kambosos wish you all the best in the future.”

“While I am saddened to receive the letter of termination as your manager, it is your right to do so.

“I am proud of what we have accomplished over the past five years together and wish you the best in your future endeavors after the October 16 fight against Devin Haney.

“It is my expectation that I will receive all outstanding compensation for my work completed up until the date of the termination letter which includes the October 16 bout that I negotiated while your manager as part of one deal inclusive of two fights. I trust you will direct DiBella Entertainment to transfer the funds as have been the case for the previous eight fights that we have worked on together.

“I will also be happy to update BoxRec once this fight is completed. Once again, I look forward to seeing you and Jim in Melbourne soon. 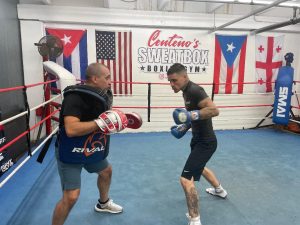 According to Centeno’s lawsuit against Kambosos:

“33. Accordingly, the Defendant KAMBOSOS has breached his oral agreement with the Plaintiff, JAVIEL CENTENO.

It further states that after the first fight with Haney: