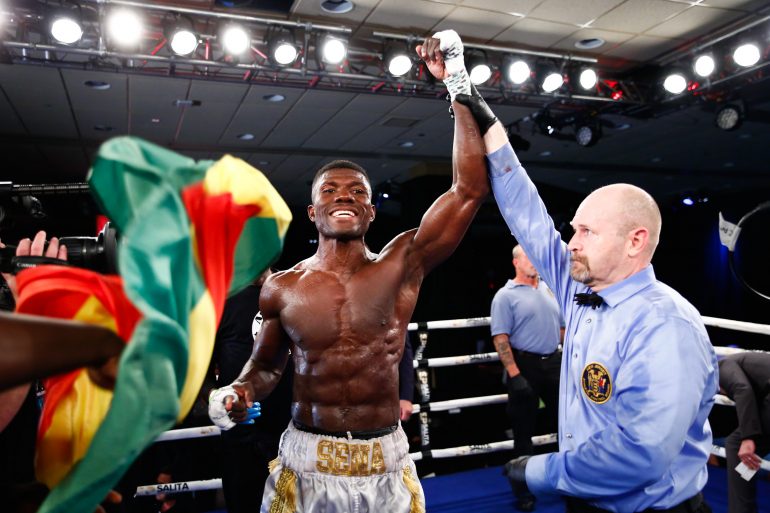 But Showtime’s “ShoBox: The New Generation” has a tendency to produce fights where the unexpected happens. It’s exactly what occurred Friday night from Bally’s Grand Ballroom in Atlantic City, New Jersey.

Agbeko (27-2, 21 knockouts) pulled off the biggest victory of his career with a unanimous 10-round decision over the previously unbeaten Steen, winning on the scorecards of judges Mark Consentino (97-93), Anthony Lundy (96-94) and Joseph Pasquale (98-92).

“To be able to show up and get this done, I’m very happy to get the vindication for all the hard work I’ve put into this sport,” said the 30-year-old Agbeko, who dropped a unanimous decision to undefeated contender Vladimir Shishkin in his only previous ShoBox appearance in 2021. “My biggest worry coming in on the B-side was that I was going to get robbed. He was better than I expected, and my goal was to just stay loose and let my hands go.”

Agbeko, who fights out of Nashville, Tennessee, wasn’t shy about calling out Music City-area native and former Agbeko training partner Caleb Plant after the win.

“I want Caleb Plant! Caleb, let’s do it in Nashville. Let’s sell out Bridgestone Arena,” Agbeko shouted into the camera following his win.

Many at ringside saw the fight much closer, including Showtime’s scorer Hall of Famer Steve Farhood, who scored it a 95-95 draw, as did Showtime analyst Raul Marquez.

The interesting keys to the fight came late. Agbeko surged in the last three rounds and was by far the more aggressive fighter. Steen was fighting for the first time in 15 months, and that may have shown by his punch output in the latter rounds.

The final result may not have been a shocker. How wide the scores were was. The fight was viewed as far closer than what the three judges scored. The victory marked the fourth-straight victory for Agbeko, whose corner was urging him to go after Steen.

The other surprise was the first three rounds on all three judge’s scorecards went to Agbeko, who worked with a lead he never relinquished.

Steen (16-1, 12 KOs) worked well behind his jab early on, though he became too dependent on it, failing to mix his combinations until the midway point in the fight. Agbeko, on the other hand, played the aggressor throughout much of the fight.

His work rate stumbled in the mid rounds, though he regained his rhythm by the end of the fight, showing a greater sense of urgency in going after Steen over the final three rounds. 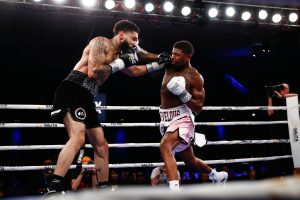 “The scoring was messed up, for real,” said Steen, the half-brother of 2016 U.S. Olympian and ShoBox alum Charles Conwell. “He wasn’t going to touch me. I was throwing more jabs, connecting and landing more shots. I don’t see what the judges saw, but I definitely won that fight. They were scoring his blocks. His big punches were blocks and weren’t landing. When they said 98-92 I thought that was my score. He wasn’t touching me.”

In the co-feature, junior middleweight Marquis Taylor fought for the first time since his controversial eight-round split-draw he had against Paul Kroll in February. The light-punching Taylor (13-1-2, 1 KO) got back in the win column with an eight-round unanimous decision over Marlon Harrington (8-1, 7 KOs). 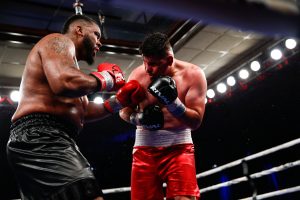 “I’m not surprised I was so dominant. I’m usually the ring general. I did want to close it out, but I had to keep remembering he was dangerous from round one to round eight. He’s very strong, very awkward and kind of slick, so I had to keep my hands up and not put my chin in the air and stick with the fundamentals.”

In the first televised fight of the night, heavyweight Moses Johnson (9-0-1, 7 KOs) remained undefeated with an eight-round majority decision over Elvis Garcia (12-1, 9 KOs). Johnson used a more up-tempo approach and he landed the heavier shots.

“It was all heart,” said the 30-year-old Johnson. “We still got a lot of work to do. I have to keep working on my range and my distance and my boxing. We’re going to get there. We’ll be back in the gym on Monday.