Terence Crawford to fight David Avanesyan on Dec. 10 in Omaha 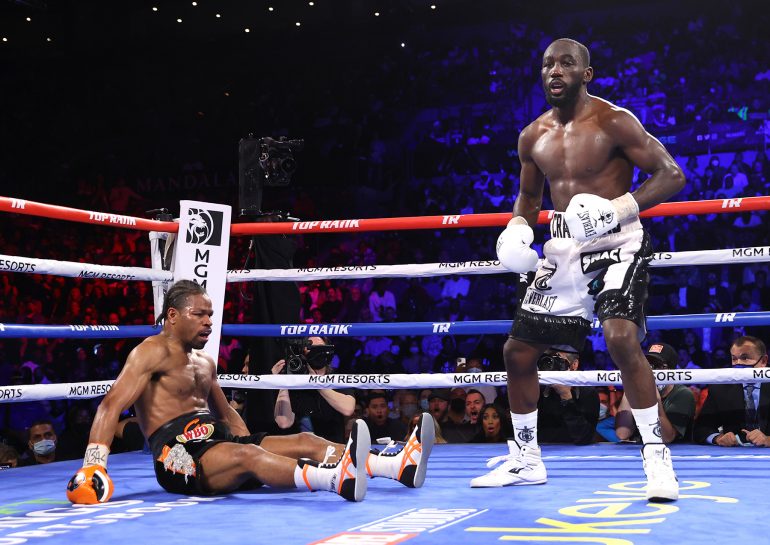 Terence Crawford separated himself from Shawn Porter in Round 10. Photo by Mikey Williams/Top Rank Inc via Getty Images
21
Oct
by Ryan Songalia

Fight fans hoping to see the two best welterweights in the world battling for supremacy will have to wait.

WBO welterweight titleholder Terence Crawford will defend his WBO welterweight title against David Avanesyan on Dec. 10 at CHI Health Center in Omaha, Nebraska, it was reported Thursday by ESPN. The bout will be the first for the 35-year-old Crawford since his tenth round stoppage of Shawn Porter in November of 2021.

Avanesyan (29-3-1, 17 knockouts), who was born in Russia and now resides in the United Kingdom, is riding a six-fight winning streak in Europe, but lost his last two fights in the United States, when he was stopped in 2018 by Egidijus Kavaliauskas in six rounds, and dropped a decision to Lamont Peterson in 2017. Prior to that, he sent a 45-year-old Shane Mosley into retirement with a decision win in California.

Despite his relative anonymity, the 34-year-old Avanesyan has respectable victories during his current winning streak, including a first round stoppage of Kerman Lejarraga in Spain and a sixth round stoppage over 2016 Great Britain Olympian Josh Kelly.

Hopes had been rising that Crawford (38-0, 29 knockouts) and unified titleholder Errol Spence Jr. (28-0, 22 KOs) would finally meet this year, but the fight build-up remains this decade’s answer to Mayweather-Pacquiao. Both fighters pointed fingers at one another, with Crawford telling ESPN that Spence’s promotional outfit Premier Boxing Champions had been targeting the fight for 2023 instead.

“I was really looking forward to the Errol Spence fight. I started communicating with [PBC head] Al Haymon and PBC back in June. And unfortunately, they represent a fighter in Errol Spence who didn’t want the fight as bad as I did,” the promotional free agent Crawford told ESPN.

Spence claims it was Crawford who has been stalling, lamenting on Twitter that he could have had a fight arranged for himself in November.

The Crawford-Avanesyan fight will be streamed live on BLK Prime for $39.95 and will reportedly earn Crawford a career-high payday in the eight-figure range, ESPN reports.