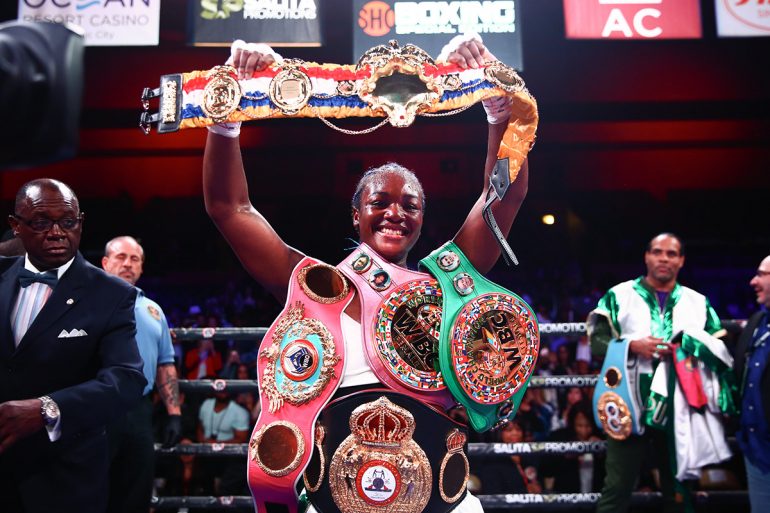 October promised to be a historic month for women’s boxing, and it is definitely delivering on its promise.

In the main fight of the past two weeks, the woman that has claimed all along to be the greatest to ever do it notched another signature win on her way to cementing that claim.

Traveling to England to face the only woman who ever defeated her, and in her backyard to boot, Claressa Shields defended her Ring middleweight belt with a superb performance, and in doing so reclaimed the No. 1 place in our mythical pound-for-pound ratings, surpassing Katie Taylor and returning to the place she had occupied when the ratings were created two years ago.

“Claressa Shields put on an extraordinary effort from the moment the bell rang in the first round through the final one,” said historian Malissa Smith. “Marshall met her moment with aplomb and never gave into the pressure on her across the bout.”

“Shields gave Marshall a boxing lesson,” said Argentina’s Yesica Palmetta, while her co-author of a history book on Argentine women’s boxing Irene Deserti also said that “Claressa’s performance was impeccable, from the physical, the technical and the strategic points of view. She knew that she couldn’t leave anything to chance, she had to give her best in every round.”

Columnist Mark Jones said that “Shields or Cecilia Braekhus, take your pick, is the greatest female boxer of all time.” Word ‘round the campfire says that a matchup between those two is still a possibility, and that fight could finally be the final step in Shields’ career toward claiming all-time greatness and etching it in stone.

In other news in the pound-for-pound ratings, Mikaela Mayer’s loss at the hands of Alycia Baumgardner led to her demotion in the P4P ratings to No. 9, with Baumgardner coming in at No. 8 and Savannah Marshall dropping down to No. 10 to displace recent addition Yokasta Valle.

In other changes to the women’s ratings in the past two weeks:

Veteran Heather Hardy scored a win that allowed her to return to the lightweight ratings, taking the No. 5 position from recent addition Maira Moneo.

Mikaela Mayer lost her Ring belt to Alycia Baumgardner, but remains No. 1 due to her excellent performance in a very close fight. We will surely see the pair face off one or two more times in the future.

Australia’s Cherneka Johnson survived a super nasty cut on her forehead to drop the legendary Ramadan and pick up a great win. With Dina Thorslund out due to inactivity at the weight, Johnson came in at No. 4 in the junior featherweight division.

One week ago, Gabriela Fundora’s win over Naomi Arellano was also deemed solid enough for Fundora to crash into the flyweight Top 5 at the expense of Ibeth Zamora.