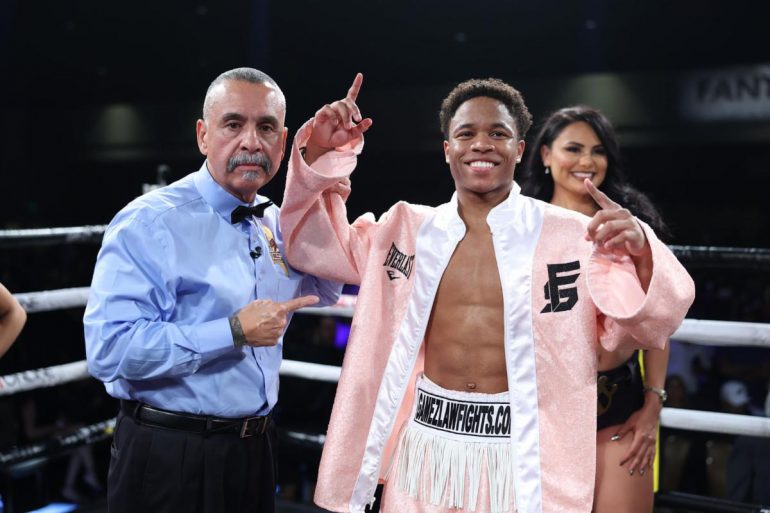 Floyd Schofield envisioned a first-round knockout over Daniel Rosas. While the unbeaten lightweight thought he would stop Rosas with a punch to the body, a devastating left hook to the head ended matters in the opening round of their Golden Boy Fight Night main event that was streamed live on DAZN on Thursday.

He ends the night with a first round KO!#SchofieldRosas pic.twitter.com/1M2q6imJ5r

Schofield did not disappoint his new promotional company as he was on the attack from the opening bell, putting Rosas on the defensive and forcing him to fight off the ropes. Midway through the round, the taller Schofield landed a vicious left hook to the chin, dropping Rosas flat onto his back. Referee Ray Corona immediately stopped the fight at 1:37.

Schofield, who improved to 12-0, 10 knockouts, called out other top prospects at 135 pounds.

“I could see it in his face that he didn’t want to fight,” said Schofield during his post-fight interview. “My team told me to jump on him. It may not have been (a punch) to the body, but I think the punch to the head is more impressive. I’m really satisfied with my performance.

“I want all the top dogs that they call top prospects. I’m the top prospect (at 135 pounds). I’ll fight Marc Castro. Keyshawn Davis. There can’t be 20 of us.”

Throughout the fight, Ortiz was the more-polished fighter of the two. She was able to connect several times with right hands to Santizo’s head behind a consistent jab. Santizo was game, never stopping moving forward and throwing punches, but was never able to put Ortiz in any danger.

Ortiz made 12 successful defenses of the WBA Female 105-pound title before losing to Seniesa Estrada by unanimous decision on March 20 of last year.

Santizo, who resides in Guatemala City, Guatemala, drops to 10-2, 6 KOs. Her other defeat was a knockout loss to Estrada on December 18.

In junior middleweight action, Jorge Estrada of Los Angeles defeated Mexico’s Sergio Gonzalez (6-12-1, 2 KOs) by majority decision. One judge scored the bout 38-38, while the other two judges scored the bout 40-36 in favor of Estrada, who goes to 4-0, 3 KOs.