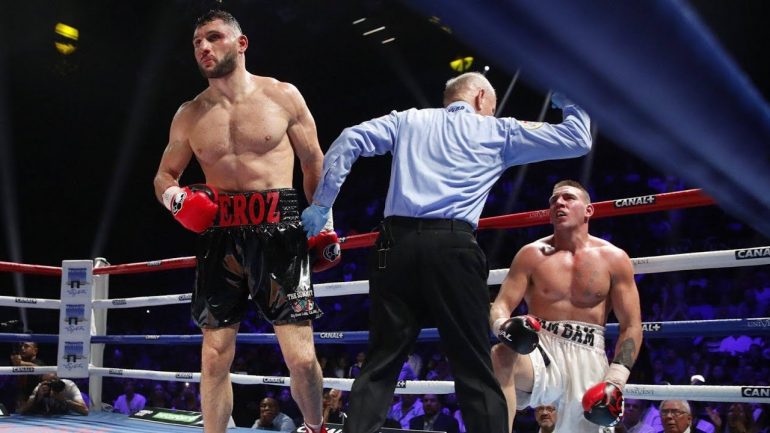 News reached The Ring that WBA cruiserweight titleholder Arsen Goulamirian will fight for the first time in almost three years when he faces unbeaten Aleksei Egorov at La Palsestre in Le Cannet, France, on November 19.

The Y12 boxing promotion will have a strong undercard featuring a pair of European title fights. Kevin Lele Sadjo will defend his crown against once-beaten Emre Cukur, while Milan Prat and Abass Baraou will contest the vacant European junior middleweight title.

Goulamirian and Egorov had been due to fight last December. However, the defending champion tested positive for Covid and the fight was postponed. Thankfully Goulamirian recovered and although it has taken longer than hoped, the two will finally meet.

Goulamirian (26-0, 18 knockouts) made his bones in Europe before linking up with renowned trainer Abel Sanchez. A dark horse in the division, he won the WBA title in 2019, knocking out Kane Watts (KO 4), and returned quickly to defend against Constantin Bejenaru (RTD 9). The 35-year-old France-based Armenian is unrated by The Ring due to his inactivity.

Egorov (11-0, 7 KOs) was a strong amateur and regularly competed at the Russian nationals, claiming the top prize in 2013. Since turning professional in 2016, the powerful Russian has beaten Lateef Kayode (RTD 6), Tommy Oosthuizen (UD 10) and Roman Golovashchenko (TKO 3). However, the 31-year-old Russian hasn’t fought since March 2020.

Sadjo (18-0, 16 knockouts) won the French national title at 178 pounds as an amateur, in 2017, and turned professional thereafter. The 32-year-old initially fought as a light heavyweight but worked his way down to super middleweight. The all-action fighter defeated Walter Sequeira (TKO 10) and Ronnie Landaeta (UD 10) before claiming the EBU title. He has since found opportunities difficult to come by and had to mark time by stopping Georgian journeyman Badri Gogichashvili (TKO 3) while waiting for Cakur.

When the European junior middleweight title became vacant, Prat and Baraou agreed to face each other to fill the vacancy in what appears to be a very evenly matched contest.

Prat (17-0, 14 KOs) fought his way through the ranks and claimed the French national title by stopping the usually durable Fouad El Massoudi (TKO 3) and made one successful defense. The 23-year-old has won all four fights this year, including a first-round knockout over one-time prospect Joel Julio and a seventh-round stoppage over the previously unbeaten Amaury Massenaux.

Baraou (12-1, 8 KOs) was a good amateur, winning the German national title in 2014 and 2015. He went on to win gold at the European championships in 2017 and bronze at the World Championships in 2017. The 27-year-old moved quickly after turning professional in 2018, winning a WBC regional title in just his fifth fight against former IBF 154-pound titlist Carlos Molina (UD 12). The 27-year-old lost his unbeaten record to vastly more experienced Jack Culcay (SD 12) but has returned with three wins.