On this day: Marvelous Marvin Hagler crushes Mustafa Hamsho in three, looks ahead to Hearns 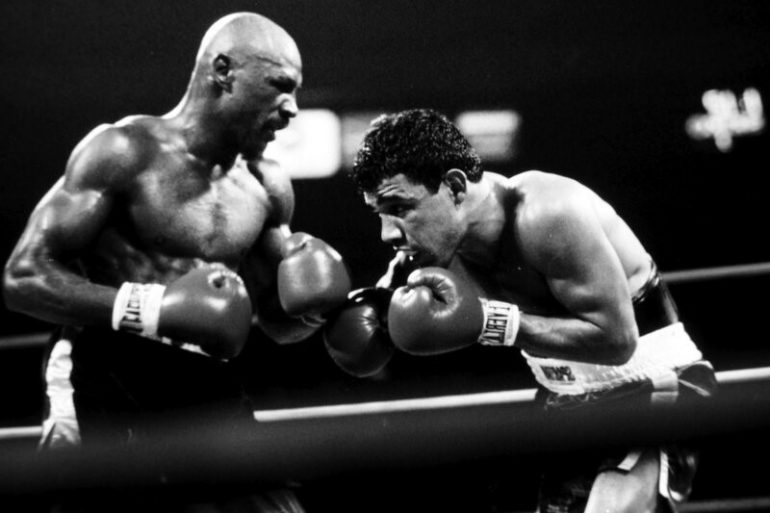 Photo by The Ring/ Getty Images
19
Oct
by The Ring

It was the fight before the fight.

On Oct. 19, 1984, Marvelous Marvin Hagler scored a third-round knockout over Mustafa Hamsho to retain the middleweight championship of the world at Madison Square Garden. The official time was 2:31.

Hagler, who had battered Hamsho to an 11th-round stoppage defeat four years earlier, was on devastating form in his New York debut. The only damage Hamsho managed to inflict came courtesy of flagrant and persistent headbutts; tactics that got him nowhere.

An explosive combination decked the New York-based Syrian in Round 3 and Hagler wasn’t about to let him off the hook. When the challenger found his feet, he was peppered by an endless stream of combination punching before a big right hook dropped him once again. Hamsho’s trainer-manager, Al Certo, came to his fighter’s rescue before referee Arthur Mercante could administer another count.

“[Hamsho] tried more bobbing and weaving, but he can’t whip Marvelous Marvin Hagler,” said the champion during his post-fight interview with HBO. “I’m the best, they won’t give me the credit, not even you (sportscaster Larry Merchant). I’m waiting for the day you tell me I’m the greatest.”

With this mandatory assignment out of the way, Hagler could now focus on a superfight against white-hot rival Thomas Hearns. The pair had been taunting each other for months and their battle would finally be locked in for April 1985.

The rest is history.