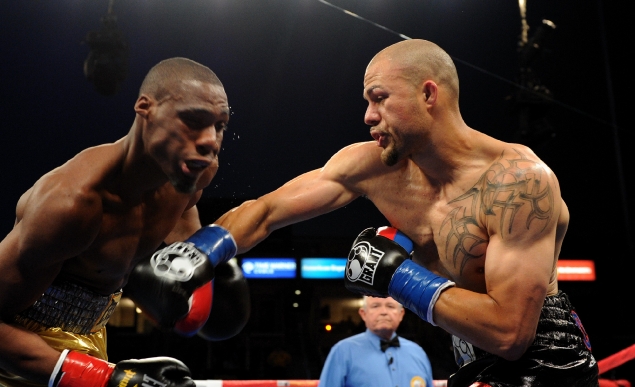 Former IBF welterweight champion Kermit Cintron has found more happiness outside the ropes than he could ever find inside them.

The 42-year-old Puerto Rican who lives about an hour from Philadelphia in Pennsylvania is studying radiography, enjoying family time with his wife and their three children and playing a lot of golf.

He fought the likes of Sergio Martinez, Paul Williams, Antonio Margarito (twice), Walter Matthysse, Canelo and Alfredo Angulo in his 39-6-3 career, and his career wound down with him taking local fights, trying to get to 40 wins.

“I was just being home. What was I doing? I have no idea,” he laughed, asked about how he spent his immediate time in retirement. “One thing was golfing. I was golfing a lot. Was my mind in boxing? Hell no. My mind wasn’t in boxing. The only time I would talk about boxing was when a reporter or my team would call me about a fight, and that was it. Apart from that, you’ll never hear me talk about boxing at home. Right now, I have no boxing pictures up, none of my belts are around. You don’t see nothing about boxing in my house. Everything is in the basement where it belongs.”

Cintron is candid but he doesn’t speak with bitterness. He’s to the point. Speaking on the Boxing Life Stories podcast, Cintron talked about nearly getting matches with Manny Pacquiao, Floyd Mayweather and a big showdown with Miguel Cotto, which he coveted more than any other fight.

“I would have loved the Cotto fight,” Cintron explained. “That would probably have been the biggest fight in my era [for him]. Pay-per-view numbers would have been ridiculously high and it’s a fight that should have happened and never did.”

“That would have been huge,” he continued. “A huge event for all Puerto Ricans and for the island, for everybody.”

He says the best he fought was Martinez, who ironically Cintron drew with and would get the Cotto fight in the Garden down the line, and it was often that way for Cintron. He doubts the validity of Margarito’s wins over him after what happened with Margarito prior to his fight with Shane Mosley, but there was a period when Cintron, trained by the late , great Emanuel Steward, was hot stuff.

Towards the end, in his final three fights, two were decided by headbutts and there was a shootout lost too Philly puncher Tyrone Brunson.

“Those fights I had locally were to build my record up more,” Cintron admitted. “I wanted to get to 40 wins and call it a day, so those fights are definitely fights I should have won and I won most of them. The last three, [David] Grayton and the Marquis [Taylor] fight ended in headbutts… With the Tyrone Brunson fight, it was going to be either me knocking him out or him knocking me out. I had him off his feet, he should have been stopped. They should have called the fight off when I had him wobbled but they let the fight go, the bell rang, he comes back [and] in my mind I thought I was going to beat him and I went in with my hands down and he threw a one-two and I went down. I got up, went back down again, got up again and the third time he just pushed me and the ref waved it off.”

Cintron talks with a detailed honesty. He doesn’t hide his emotions and he doesn’t try to. Despite the big nights, the glamour bills on HBO and against the big names, he wasn’t satisfied with his story in boxing.

“It was never mission accomplished,” Cintron said. “As a fighter, yes you want to become a world champion. Yes, you got there, now what? It’s winning all the belts, becoming undisputed, and I never got the opportunity to continue defending my title. Yes, I defended it twice, one of my goals was to get the championship ring. That never happened. Becoming an undisputed champion, that never happened. There was so much that I could have done in my boxing career, it’s just the opportunities never came about.”

Cintron was a wrestler before he boxed, and he competed at high level. With the advent of MMA, he could have easily switched codes, but with hindsight, he’d probably have stayed away from combat sports altogether.

“Believe it or not, I would never have started boxing,” he said, about if he had his time over. “I would have just gone about getting my degree and lived a normal life. I missed out way too much of my kids. I came home and they were two-years-old already and when I left they were like nine months old, so I missed a lot of my kids. I missed Thanksgiving dinners, too many. Too many Christmases. Too many weddings. I missed out on a lot and would I go back and do it [boxing] again? No. I would just have lived a normal life, got my degree in phys ed [physical education] and lived life.”

It’s rare to hear that. Few would take the opportunity to never feel the buzz of fight night, let alone accomplish what Cintron did. But his contentment for life now gives him a bigger buzz than those chilling knockouts he accumulated.

“Getting birdies on the golf course is just as much [of a rush], man,” Cintron insisted. “It’s just as much. In golfing, you’re always scoring over 100 and then you drop your scores and now you’re to the point where you’re mid-70s. That’s a rush right there. Because all these years playing golf and working my game to where I am right now, it’s the same, absolutely. And I’m not getting punched. I’m hitting the ball.”

To hear the full interview with Kermit Cintron, click here.