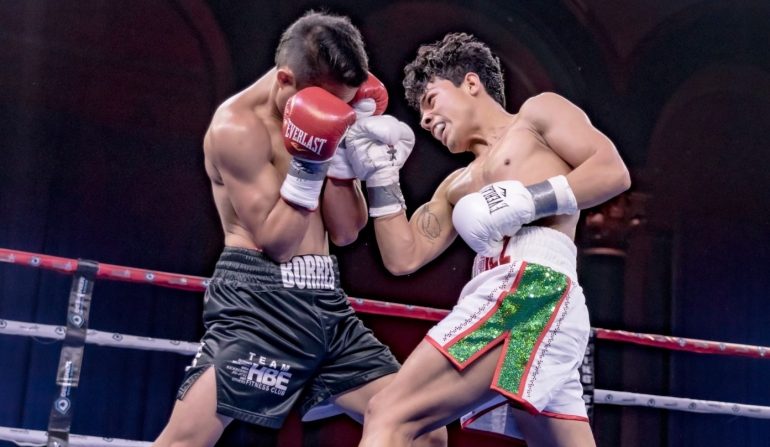 Andy Dominguez lands an uppercut in a first round stoppage win over Jeronil Borres this past March in Atlantic City. Photo by Samad [email protected] MediaSports
12
Oct
by Ryan Songalia

Andy Dominguez hardly knows anything about his opponent, but it matters little to him. Dominguez, a Mexico-born, New York-raised flyweight, knows there are very few boxers his size in America, and he has to take what he can get to stay busy. After all, flyweight boxers have been exceedingly rare in New York since the 1920s, when 112-pound warriors like Frankie Genaro and Abe Goldstein were trading punches at Madison Square Garden a full century ago.

Though there will be a minor flyweight title at stake, his bout against Ricardo Caraballo this Thursday at Sony Hall in New York will take place at a catchweight of 110 pounds, a concession which Dominguez deemed necessary to get the fight made. For his previous fight in May, Dominguez had to accept the bout at 108 pounds, a mark he missed by half a pound.

“You can’t say no because it’s hard to find people to fight. There’s barely any flyweights and it’s hard to get a good promotion to fly in an opponent. All I know is he has a lot of amateur experience and he’s a righty and a southpaw,” said Dominguez (7-0, 5 knockouts) of the eight-round bout against the Florida-based Caraballo (7-1, 2 KOs), a 2012 National Golden Gloves finalist.

The bout will appear as part of a Boxing Insider Promotions card that also features other New York based talent like former WBO featherweight titleholder Heather Hardy and welterweight contender Ivan Golub.

Finding opponents in the professionals has been difficult, but very little about boxing, or his life, has been easy.

The 24-year-old Dominguez was born in Mexico City, but grew up in an impoverished farming town which he says isn’t even included on maps. His mother, who cared for him by herself, left him with his grandparents when he was young to begin building a new life for them in New York. His grandparents survived by growing corn, which they then sold or traded for other goods like beans.

He joined his mother in the South Bronx at age ten, but the small boy soon found himself the target of bullies.

“I used to get in fights a lot, not because I like to fight, but because they would always pick on me and I would never let myself get picked on,” said the 5’3” Dominguez. 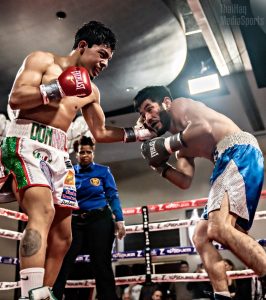 His mother grew tired of the constant phone calls from the principal’s office and enrolled him in a karate class. After a week of disinterested classes, Dominguez joined the Willis Ave. Boxing Gym. There, he linked up with Jose “Lupin” Guzman, a veteran trainer who developed numerous amateur champions out of that gym tucked inside a Methodist church.

Dominguez was one of those champions, winning the New York Golden Gloves three times in a 59-bout amateur career where he tasted defeat just four times. He would have been a strong contender to win at the national level too, but was ineligible to compete in bigger tournaments like the National Golden Gloves because he was not a U.S. citizen. Instead, the losing opponent would advance, while Dominguez was left to look for one-night shows elsewhere.

Despite being ineligible for national tournaments, USA Boxing still picked him to compete in duels against other countries. Dominguez boxed – and defeated – boxers from Mexico, Puerto Rico and Ukraine in duels against New York, but longed for opportunities to fight at an even higher level.

That opportunity came when his advisor, Marcelino Castillo, invited him out to Las Vegas to spar with junior bantamweight contender Andrew Moloney. Dominguez did well, and was introduced to famed trainer Ismael Salas, who counts Felix Savon, Guillermo Rigondeaux and Jorge Linares among his pupils.

“First [Salas] taught me the jab, we started training with one hand, then the next day [Castillo] said ‘you’re gonna start training with Ismael Salas,’” said Dominguez, who is also managed by Vishare Mooney.

Dominguez has moved quickly, turning pro in August of 2020, followed by three fights in 2021. The fight against Caraballo will be his fourth of 2022. His last bout was an all-out war with Edwin Reyes in Newark this past May, winning by fourth round stoppage.

Dominguez has been based in Las Vegas for two years, and only returns home for a couple weeks after fights to visit his mother. After Thursday’s fight, he’ll return back to Vegas to begin training camp with WBO junior bantamweight titleholder Kazuto Ioka (29-2, 15 KOs), who also trains with Salas.

Dominguez has managed to climb to the no. 14 ranking with the WBA despite not having a promoter, and believes it won’t be long until he has a world championship around his waist as well.

“Hopefully after this fight I’ll get another fight and I’ll keep getting ranked and get noticed,” said Dominguez.

“Believe it or not I feel like in less than one year I’ll be fighting for a world title.”