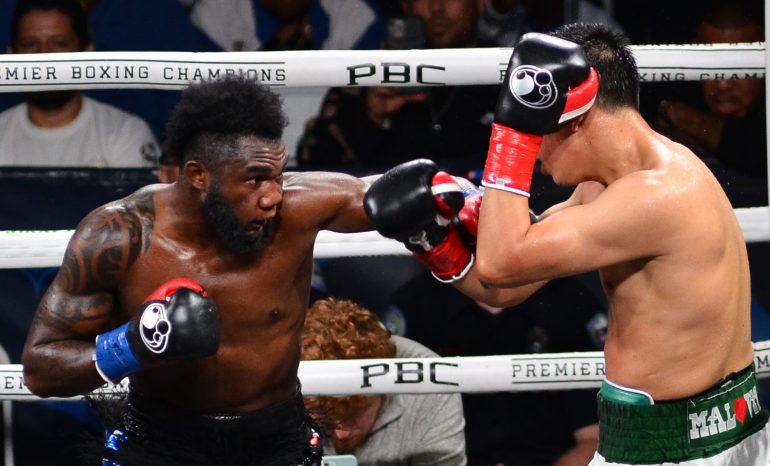 CARSON, Calif. – In a clash of hard-hitting junior middleweights, it was Carlos Adames who reigned supreme, stopping Juan Macias Montiel in the third round Saturday night.

Adames, who is originally from the Dominican Republic and now resides in Washington Heights, New York, improves to 22-1, 17 knockouts.

The feeling-out opening round did not win over boxing fans in attendance, drawing boos and whistles from the crowd at Dignity Health Sports Park. Both fighters let their hands go more during the second round, but it was not until the following round when Adames and Montiel stood in the pocket and connected with hooks and crosses.

With over a minute left in the third round, a right cross to the chin staggered Montiel. Adames pounced on Montiel, who attempted to fight back off the ropes. Moments later, a barrage of punches from Adames landed on Montiel, prompting referee Ray Corona to stop the fight at 2:37.

“I know I’m a strong fighter and I respect the decision of the referee to stop the fight,” said Adames. “(Montiel) is a young guy. When I hit him with that right hand, I knew the fight was going to be over soon.”

The 28-year-old Adames has now won his last four bouts since suffering the only loss of his career at the hands of Patrick Teixeira in November 2019.

Adames is the mandatory challenger to face WBC world middleweight titleholder Jermall Charlo. He hopes Charlo is his next opponent, but he is willing to face any of the other world titleholders.

“I proved I’m the No. 1 fighter in the division,” said Adames. “Not only am I ready for Jermall Charlo, but I’m ready for any of the world champions at 154 pounds.”

Montiel, who resides in the boxing hotbed of Los Mochis, Mexico, drops to 23-6-2, 23 KOs. He challenged Charlo for the WBC world title on June 19 of last year, losing by unanimous decision.

He is promoted by Sampson Lewkowicz.