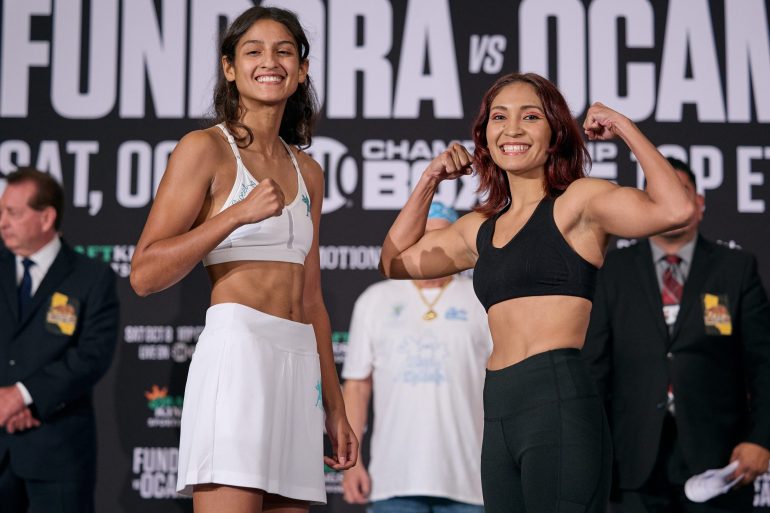 CARSON, Calif. – Gabriela Fundora made the most of her time in the spotlight Saturday night.

After being led to the ring by her brother, junior middleweight contender Sebastian Fundora, who fought Carlos Ocampo later on the Premier Boxing Champions (PBC) card, Gabriela Fundora demonstrated an impressive skill-set, working behind a consistent jab.

The southpaw Fundora was able to utilize her reach effectively, mostly keeping her distance from the shorter Reyes. At times, Reyes was able to get on the inside of Fundora’s guard, connecting with an occasional right, but Fundora would connect with a counter uppercut to the head.

As the bout progressed, Reyes continued barreling in, but Fundora easily countered with an array of combinations, including punches to the body.

Fundora last fought on July 28, defeating Lucia Hernandez Nunez by unanimous decision in Indio, California, a short drive away from her hometown of Coachella.

Gabriela and Sebastian Fundora are both promoted by Sampson Lewkowicz.

Reyes, who resides in Tepic, Mexico, drops to 9-2, 5 KOs. She had won her previous five bouts prior to the loss to Fundora.

Both fighters were on the attack from the opening bell, producing solid exchanges between the two. Despite getting stunned during the fourth round, the 18-year-old Rebollar was the more-effective fighter, doing his best work by moving in and out of Cardona’s reach.

Hard-hitting middleweight Elijah Garcia scored a first round knockout victory over Mexico’s Edgar Valenzuela (7-2, 6 KOs). The southpaw Garcia (12-0, 10 KOs), who resides in Phoenix, Arizona, scored three knockdowns, all on punches to the body. Time of the knockout was 2:18.