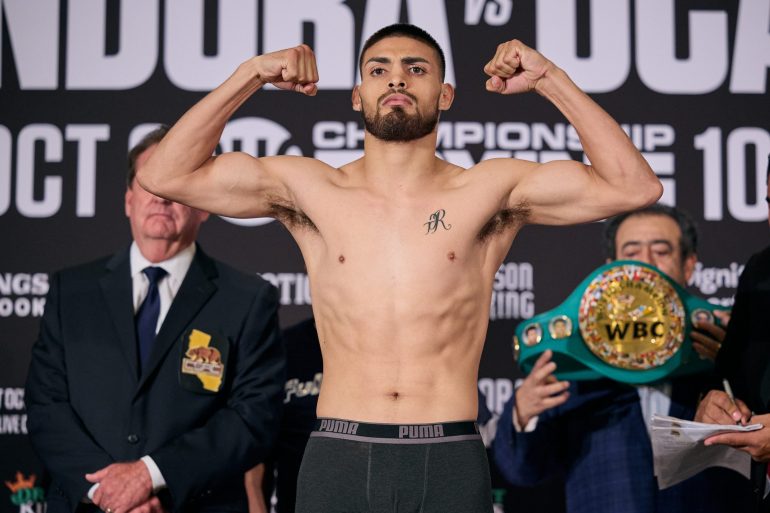 Carlos Ocampo is proving one loss does not define a career.

Ocampo has come a long way since suffering the only loss of his career, and now he hopes to make the most of his opportunity at defeating one of the best junior middleweights in the division.

Ocampo (34-1, 22 knockouts), who resides in Ensenada, Mexico, is riding a 12-fight winning streak since his loss to Errol Spence in June 2018. Ocampo challenged Spence for the IBF world welterweight title.

Because Ocampo lost by knockout in the opening round, the perception may be that Fundora, ranked No. 2 by The Ring at 154 pounds, will overwhelm Ocampo. That could be a cop out considering Ocampo momentarily stunned Spence midway through the round before he was caught flush with a punch to the chin that resulted in the knockout loss.

Ocampo has moved on from the loss. He even returned to the ring about two months after the loss, fighting often on Zanfer Boxing cards throughout Mexico. Ocampo is promoted by Zanfer.

On March 25, Ocampo traveled to Quebec, Canada to face Mikael Zewski in his hometown in a clash of fringe contenders. Ocampo broke down Zewski, eventually winning by knockout in the ninth round. In his last bout on June 11, Ocampo knocked out Vicente Rodriguez in the opening round.

Ocampo may be the underdog going into Saturday night’s fight, but he looks very relaxed, taking in all the pleasantries of fight week.

Fundora (19-0-1, 13 KOs), who resides in Coachella, California, is coming off a hard-fought knockout win over Erickson Lubin on April 9. Fundora, who at almost 6’6” will have about a seven-inch height advantage over Ocampo, also has wins over Sergio Garcia and Hector Zepeda, both of whom were unbeaten when they faced Fundora.

Undaunted by the challenge of facing Fundora, Ocampo is confident he has what it takes to come out victorious.

“I’m going to lean on my preparation and training,” said Ocampo, who trained for Saturday’s fight at the Wild Card Gym in nearby Hollywood. “I know that Fundora is a strong fighter, but I’m going to be ready for him. I’m strong just like Sebastian is. I’m going to have to stick to my training and the results will come with that.”

Ocampo has aspirations of fighting the other top fighters at 154 pounds. First is the goal of defeating Fundora, which is no easy task in itself.

However, a win over Fundora in what could be a very entertaining fight would be rewarding for Ocampo.

“You have to take the opportunities that you’re given. My goal is to wake up on Sunday morning and have it be the happiest day of my life. I want to party with that (WBC interim world title) belt on Saturday night.

“This is going to be a spectacular fight. There are going to be fireworks on Saturday night.”