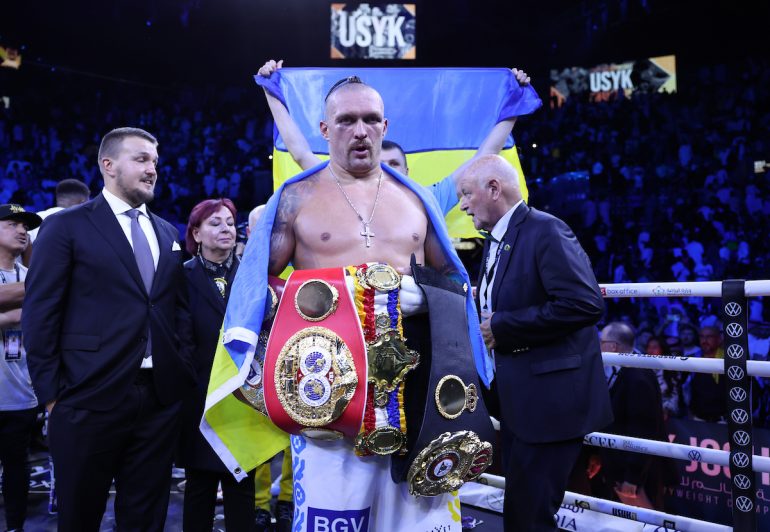 Next up is heavyweight. As always, please enjoy the debate and respect other people’s opinions.

THE PAST: Usyk was an outstanding amateur, who captured gold at the 2012 Olympics. He cleaned out the cruiserweight division, beating Krzysztof Glowacki (UD 12), Marco Huck (TKO 10), Mairis Briedis (MD 12), Murat Gassiev (UD 12) and Tony Bellew (TKO 8), all in their home countries. The manner in which he outboxed Gassiev to become undisputed champion was particularly eye-catching. After moving up to heavyweight, Usyk was hampered by injuries and the pandemic. He scored a routine win over late substitute Chazz Witherspoon (RTD 7) and outpointed perennial trier Derek Chisora (UD 12). However, the proud Ukrainian reminded everyone just how special he is when he twice bested Joshua (UD 12/ MD 12).

THE PAST: Joshua won gold at the 2012 Olympics. He turned professional and won British and Commonwealth championships before stopping American Charles Martin (KO 2) to lift the IBF title. The hugely popular Brit defeated Wladimir Klitschko (TKO 11) and Joseph Parker (UD 12) to add WBA and WBO titles to his collection and was largely dominant against solid competitors Carlos Takam and Alexander Povetkin. Joshua was shockingly stopped by Andy Ruiz Jr. (TKO 7) but regained his titles in a direct rematch by one-sided unanimous decision. After beating mandatory challenger Kubrat Pulev (KO 9), Joshua was twice beaten by Usyk (UD 12/ MD 12).

THE FUTURE: In talks to face Fury on December 3. Though with time dwindling away may not happen.

THE PAST: The 2008 Olympic bronze medalist turned professional and won his first 32 fights inside the distance. Outboxed Bermane Stiverne (UD 12) to win the WBC title and made 10 successful defenses. Displayed his much-vaunted power against Stiverne (KO 1) in a rematch and Luis Ortiz (TKO 10 and KO 7) to set up the eagerly anticipated showdown with Fury. Benefitted from the scorecards to retain his title on a draw but was beaten down in the rematch and stopped in seven rounds and lost an exciting third fight in 11-rounds.

THE FUTURE: Will face Robert Helenius on October 15. A win will likely see him face Andy Ruiz next year. Has also spoken about facing Usyk and a fourth fight with Fury. 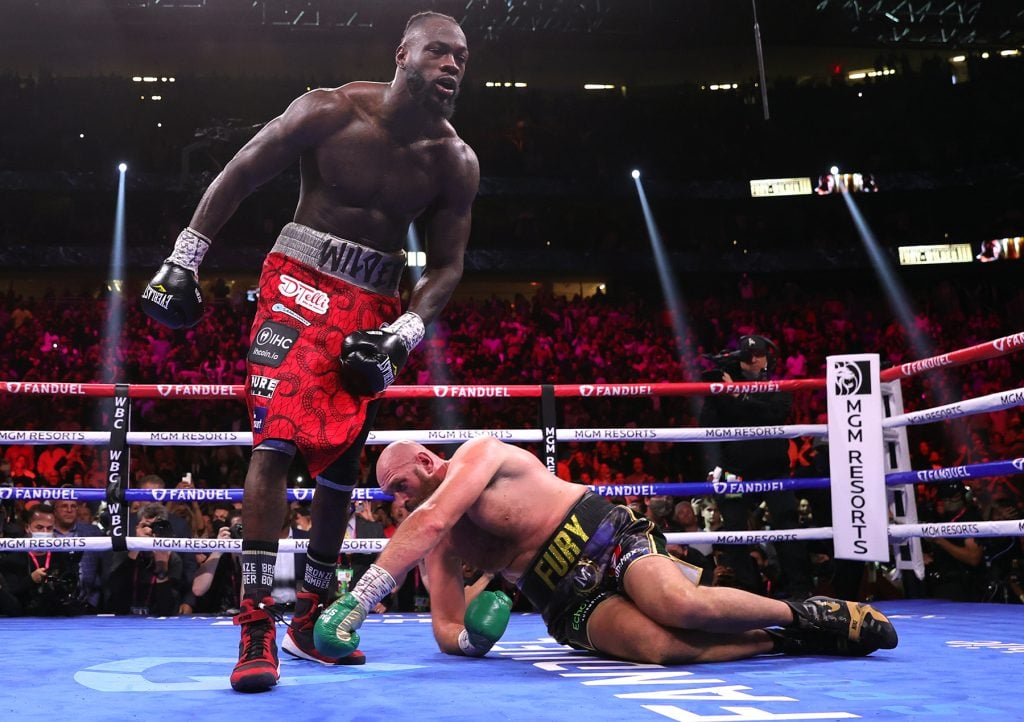 Deontay Wilder (L) knocks down Tyson Fury (R) during their fight for The Ring and WBC heavyweight titles at T-Mobile Arena on October 09, 2021 in Las Vegas, Nevada. (Photo by Mikey Williams/Top Rank Inc via Getty Images)

THE PAST: Joyce came to boxing late but enjoyed a highly productive amateur career, winning the ABA title, Commonwealth and European gold and silver at the 2016 Olympics. He turned professional at 32 and moved quickly. He won the Commonwealth title in his fourth outing and went on to score useful wins over one-time prospect Joe Hanks (KO 1), former titleholder Bermane Stiverne (TKO 6) and former world title challenger Bryant Jennings (UD 12). However, it was his measured win over Daniel Dubois (KO 10) that saw him claim the British and vacant European title that showed he has potential to be a threat on the world stage. Since then, he’s notably beaten experienced former title challenger Carlos Takam (TKO 6) and, most recently, he scored a career best win over former WBO titlist Joseph Parker (KO 11).

THE FUTURE: Has thrown his hat into potentially facing Fury in December.

THE PAST: Learned his trade in and around gyms in Southern California and Las Vegas. Bested the usual assortment of opponents on the way up before losing a close decision to Joseph Parker (MD 12) in New Zealand for the vacant WBO title. Three wins later, as a late substitute, Ruiz shocked unified titleholder Anthony Joshua (TKO 7) in The Ring Magazine Upset of the Year for 2019. A lack of discipline saw him deliver a horrible performance in the rematch which Joshua dominated. Has since had to get off the canvas to beat aged contender Chris Arreola (UD 12) and, most recently, Luis Ortiz (UD 12).

THE FUTURE: Likely waiting on the Wilder-Helenius winner for next year.

THE PAST: The powerfully built Jamaica-born fighter won his first 16 fights before losing for the first time against old amateur rival Anthony Joshua (TKO 7). Bounced back impressively to score solid wins over Derek Chisora (SD 12 and KO 11), Lucas Browne (KO 6), Joseph Parker (UD 12) and Oscar Rivas (UD 12). Was well on his way to beating Alexander Povetkin before he was stunningly knocked out by a devastating left uppercut in the fifth round. Gained revenge over Povetkin in a direct rematch, stopping the Russian in four-rounds. Was dominated and stopped by then Ring and WBC titlist Fury (TKO 6) in April.

THE FUTURE: Recently began working with new trainer, Buddy McGirt. Could fight this year but might also drift into early 2023.

THE PAST: Skilled boxer-puncher was part of the Cuban school before defecting. Since turning professional, he has posted career-best wins against Bryant Jennings (KO 7) and Tony Thompson (KO 6). Has twice given Deontay Wilder fits in title fights before being stopped (TKO 10 and KO 7). Got off the floor to stop former IBF titlist Charles Martin (TKO 6) but recently lost to Ruiz (UD 12).

THE FUTURE: Gave Ruiz some trouble and despite advancing age, he is still a handful and solid gatekeeper, who will find another chance in 2023. 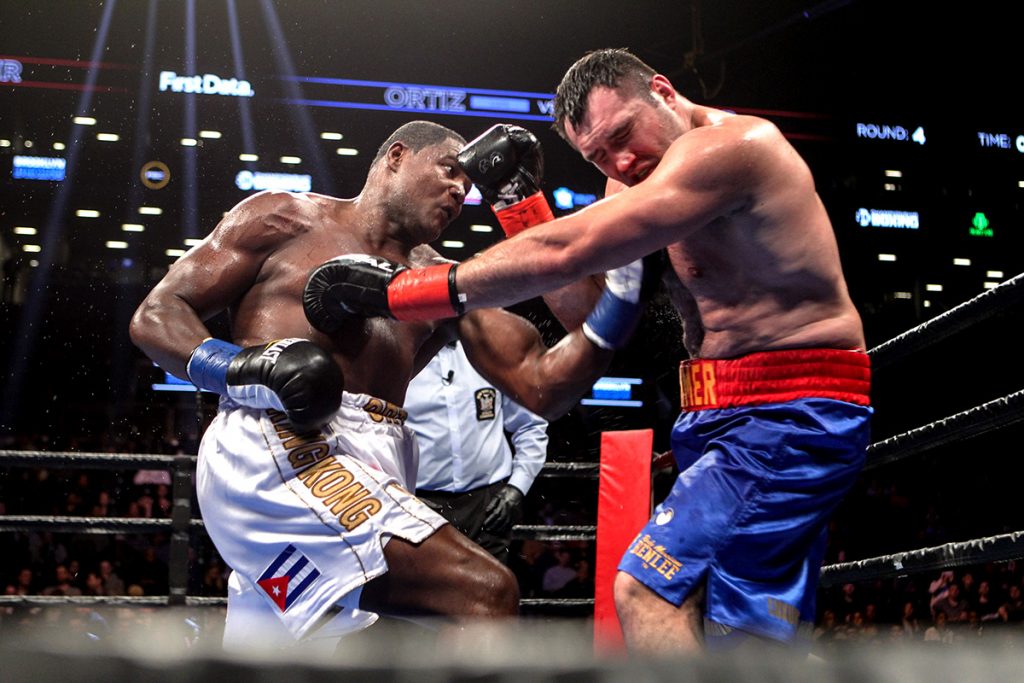 Luis Ortiz found a stubborn opponent in Christian Hammer — meaning he refused to go down — but the Cuban heavyweight prevailed with a wide unanimous decision on March 3 in Brooklyn. (Photo by Tom Casino)

THE PAST: The former amateur standout from New Zealand claimed the vacant WBO title at the expense of Andy Ruiz Jr. (MD 12) and made two defenses before losing a unification with Anthony Joshua (UD 12). Lost a razor-thin decision to Dillian Whyte but has won his last six fights, which included a pair of wins over perennial contender Chisora (SD 12/ UD 12). The 30-year-old recently lost to Joyce (KO 11).

THE FUTURE: Licking his wounds after a physically demanding fight against Joyce. Still young enough to work his way back into another title shot.

THE PAST: Hrgovic was a standout amateur, who claimed bronze at the 2016 Olympics. After turning professional, the big Croatian has moved steadily and generally looked impressive beating fringe contender Amir Mansour (KO 3), former title challenger Eric Molina (KO 3) and he became the first to stop Rydell Booker (TKO 5). However, he didn’t impress, in his most recent fight, barely edging past Zhilei Zhang (UD 12) to become the IBF mandatory.

THE FUTURE: Waiting to see how things play out with Usyk and if he’s next in line or needs to take a stay busy fight.

THE PAST: Won the Cuban national championship in 2015 and turned professional in 2017. He scored a handful of wins before beating the usually durable Joey Dawejko (UD 10) and trial horse Nagy Aguilera (TKO 6). But it was his domination of fearsome Efe Ajagba (UD 10) that drew him most acclaim. However, the 30-year-old hasn’t been able to continue to build momentum from that win.

THE FUTURE: Ticking over against Carlos Negron on October 15. 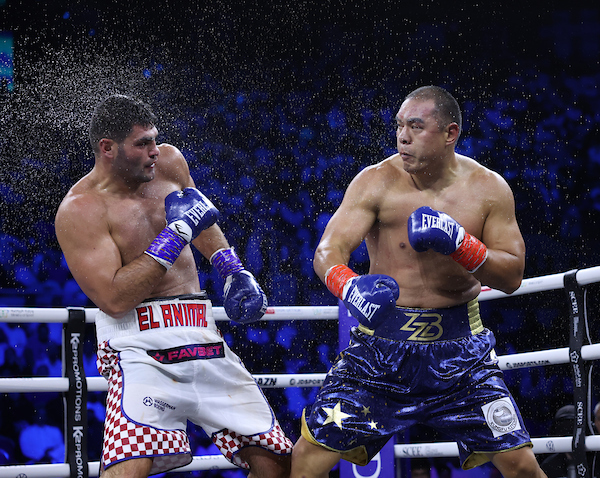 THE PAST: Zhang captured silver for China at the 2008 Olympics and lost narrowly to eventual gold medal winner Anthony Joshua at London 2012. “Big Bang” turned professional in 2014. His progress has been slow, and he didn’t face anyone of note. Held to a draw by Jerry Forrest (D 10). The 39-year-old southpaw is coming off a controversial loss to Hrgovic (UD 12)

THE FUTURE: Came away from the Hrgovic loss with a lot of credit. That performance should see him get something significant next year.