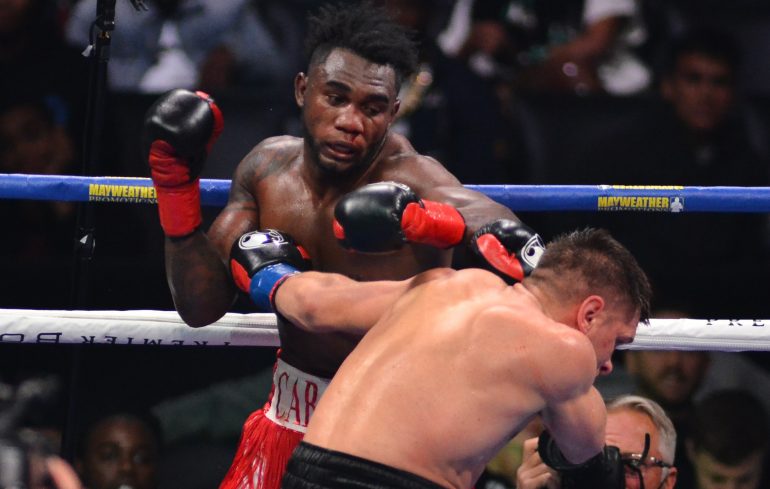 Carlos Adames took the fight to Sergiy Derevyanchenko, who battled back over the second half of a good middleweight scrap. Photo by German Villasenor
06
Oct
by Anson Wainwright

Big-punching middleweights Carlos Adames and Juan Macias Montiel will collide in what could be a fan-friendly shootout at Dignity Health Sports Park, Carson, California, on Saturday.

Adames, who is rated No. 8 by The Ring at 160 pounds, welcomes the opportunity to fight on a big card against a quality opponent.

“Fighting in Los Angeles against Montiel, a fighter who has competed at the world championship level, is a dream come true,” Adames (21-1, 16 knockouts) told The Ring. “Montiel is a very good fighter. He went the distance with Jermall Charlo which says a lot about him and his ability to fight at the elite level.

“I know there will be a lot of Mexican fans in attendance that I will win over. I’m expecting an explosive fight and the fans are going to see a great fight.”

The two fighters will contest the WBC interim middleweight title because reigning titleholder Jermall Charlo is currently sidelined with a back injury. The brash American’s injury, in June, caused him to postpone his fight with Maciej Sulecki. He has yet to return to the ring and there is no word on when he will fight next.

The 28-year-old Dominican Republic-born fighter appreciates that a win would greatly advance his world title claims.

It’s a far cry from when Adames lost for the only time to Patrick Teixeira, in November 2019. Adames started well only for a seventh-round knockdown to change the momentum and course of the fight that swung toward Teixeira, a position he wouldn’t relent.

It served as a good learning experience, one he believes from which he has benefited.

Adames, who has spent six weeks in Las Vegas training under the watchful eye of Bob Santos, knows he’ll have to be at his best against the Mexican.

“Montiel is a very good fighter,” he said. “He went the distance with Jermall Charlo, which says a lot about him and his ability to fight at the elite level. Any fighter is a threat because one punch can change everything in a fight. My goal will be to take him out before the final bell rings.”

Montiel turned professional in 2009. He won 18 of his first 21 fights in Mexico. However he suffered back-to-back loses to Jhony Navarrete (SD 8) and future titlist Jaime Munguia (KO 2). That said, once he settled in at middleweight, his form improved and he showed impressive power, taking care of fringe contender Marco Reyes (TKO 4) and James Kirkland (KO 1). Those results bookended a draw with respected Hugo Centeno Jr. (D 10).

The main event of the evening, Sebastian Fundora vs. Carlos Ocampo, plus full supporting undercard, will be broadcast on FOX Sports Pay-Per-View, beginning at 10 p.m. ET/ 7 p.m. PT