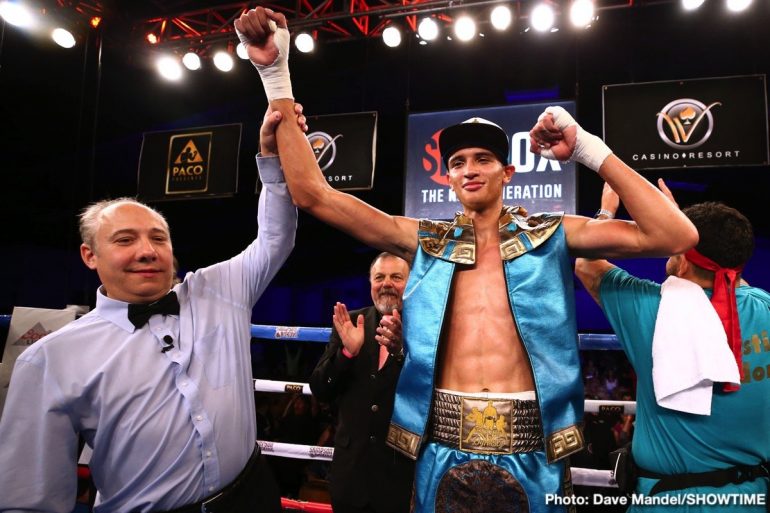 There is someone else out there that Sebastian “Towering Inferno” Fundora will be facing Saturday night other than the streaking Carlos Ocampo that will headline the Showtime tripleheader (9 p.m. ET) from the Dignity Health Sports Park in Carson, California. He’s large, and imposing, standing 6-feet-6, with an 80-inch reach and just as fearless as the exceptional 24-year-old junior middleweight from Coachella, California.

His exciting, brutal ninth-round knockout over Erickson Lubin in April is a strong contender for Fight of the Year. Trailing on two scorecards, Fundora overcame being knocked down for the first time in his career in the seventh round and possessed the wherewithal to get back up and stop the game Lubin at 3:00 of the ninth.

It’s a side of Fundora the public had not previously saw.

If there were any questions as to how he would handle adversity, “The Towering Inferno” answered them against Lubin.

“I answered a lot of questions that night, I have to say I really enjoyed every single round of that fight,” Fundora said. “That was a great fight. I felt like I was a fan watching ringside. I’m glad that the fans enjoyed it. It may have looked like I was serious trouble, but I wasn’t. Not really. It’s why I took a knee. I thought let’s be smart. If anything, I just needed a break. I got back up and I finished the job that I started.

“I knew he would crack. I knew these things if I got him (on the chin). Before I got knocked down against Lubin, that round was all me I felt. I got hit with a good punch, I took a knee and just needed to get my energy back. The round right after that I was back to being me.

I just had to prove it to everybody. Yes, it is a reminder. I think with every fight, you remind yourself that you are growing and maturing.”

Growing and maturing to the point that his standard is himself.

It’s always been that way. Each new level he’s climbed, he’s always looked for a higher ledge to perch himself.

“It’s how I stay hungry and why I think I keep getting better,” said Fundora. The Ring’s No. 2-ranked 154-pounder, behind Brian Castano and world undisputed and Ring junior middleweight champion Jermell Charlo. “If you don’t challenge yourself, how do you expect to improve? Ocampo is a strong Mexican fighter like me, so I see him coming to bang. This is the perfect fight not just for the fans here in Southern California, but for everyone watching.

“I want to fight for Charlo for the title. I feel like I deserve that. I’m the WBC mandatory. But I know I can’t get to where I want to go without beating Ocampo first. That’s where my focus lies. But my ultimate goal is to fight for the title. I’ve been ready for years, but I know I need to stay busy to stay sharp. I have to take hard fights like this to continue to grow. Ocampo is a ranked fighter and he’ll help me get to where I want to go.”

Ocampo, 26, is on a 12-fight winning streak since suffering the only loss of his career—a first-round knockout to Errol Spence Jr. for the IBF welterweight title in June 2018.

“I made a rookie mistake in the Spence fight,” Ocampo said. “I got careless at the end of the first round, and I promise that it won’t happen again. I’m moving forward, but I’ve become a better fighter because of it. The biggest lesson that I’ve learned is that I need to be more cerebral and that I have to think through things more. I learned that being careless for one second can cost me. It was a tough lesson to learn, but I won’t make the same mistake again.

“I just work hard and keep my mind set on only one thing. That’s the world title. It’s my obsession and it’s what I want more than anything in the world. I’m definitely feeling underestimated. It’s funny how one mistake four years ago can shape the perception that people have of me. I’m a completely different person and you’re going to see how much I’ve matured both physically and mentally. We’re going to give you a great fight that you won’t want to miss.”