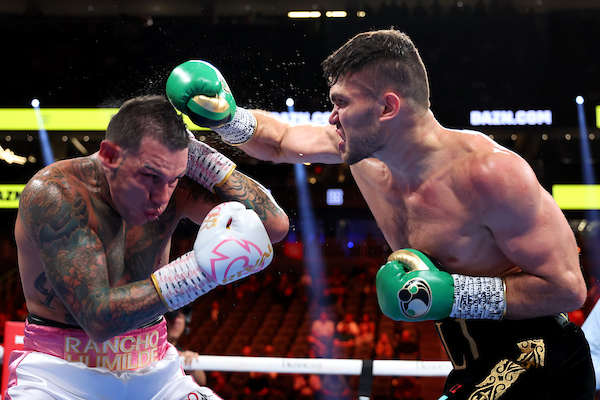 Ali Akhmedov credits his promoter with giving him wise advice before his most recent victory last month, when he outboxed Gabriel Rosado to a unanimous decision victory.

Gennadiy Golovkin, Akhmedov’s promoter and fellow Kazakh, advised his protege to follow his game plan and not try to make a statement against the tough Philadelphia boxer, who Golovkin himself had defeated by seventh round stoppage in 2013. That advice helped carry Akhmedov to the win on the Canelo Alvarez-Golovkin III undercard at the T-Mobile Arena in Las Vegas.

“Gennadiy for me, of course he’s my promoter, but he’s not just promoter, he’s a very big friend, big brother, he supports me,” Akhmedov (19-1, 14 knockouts) told The Ring.

Those words proved to be significant as Akhmedov stayed focused, didn’t get overly greedy, and dominated the former two-time world title challenger.

“We do good fight, it’s very, very big fight for me,” he said. “I know after this fight, if I win, I go up in the rankings in all the organizations. I train hard for this fight. We had a beautiful training camp. I have a great team; we do a lot of work for this fight. Before the fight I know what I want to do. I go just for win in this fight.

“I know Gabe Rosado, he’s very tough fighter. He has a long career, he’s a tough fight for everybody. Gabe is a warrior. I tried to box with him because I know he wants to fight. I think, ‘OK, if you want to fight, I’m going to box with you.’ And I make fight easier for myself. I move, I box, I know my speed is much better. Gabe has a strong mind, he wants to go fight every time but I know my boxing skills are better, my speed is much better and I make my fight easier.”

And the 27-year-old did that, scoring an impressive shut-out decision.

“I try to go all 10 rounds,” he explained. “I don’t go to try to knock him out because I understand after this fight, I have a tougher fight after this fight and I want more experience fighting long distance fights.”

That experience will serve him well, as in his one loss, he came unstuck against Carlos Gongora in the final round despite apparently having the fight in hand. Akhmedov was ahead by 10 points on one scorecard and 5 on the other two before Gongora rallied and staged a remarkable last round comeback to stop Akhmedov with just over a minute left in their contest.

“For me, my loss, nothing changes for me,” said Akhmedov, who had won two comeback fights before stepping up to face Rosado. “I understand, this is boxing, sometimes things happen, you never know. You have to stay strong mind. If you don’t have strong mind, you don’t go back. After my loss, I say, ‘OK, I lost but I’m coming back stronger.'”

Akhmedov wouldn’t be drawn on who he wants to fight, saying he is more focused on reaching the top, against whomever that may be.

“I come for world title belt, Canelo, [David] Benavidez maybe [Demetrius] Andrade, it’s doesn’t matter,” he said. “I’m ready to fight anybody. Right now, my focus is only to fight for a belt. My team are working on my next fight, hopefully December.”

Akhmedov who is guided by Tom Loeffler, felt his fighter showed new wrinkles in dealing with the sturdy Philadelphia native.

“It was great to see Ali box the way he did against a very tough and experienced veteran like Gabriel Rosado on such a big stage,” said Loeffler, who is famed for being an integral part in Golovkin’s career. “Many young fighters don’t perform under the big lights, but Ali came through like a champ and boxed very smart.

“He learned a tremendous amount and got a lot of publicity from the fight. With the win, I’m sure there will be big things ahead for Ali promoted by GGG Promotions.”