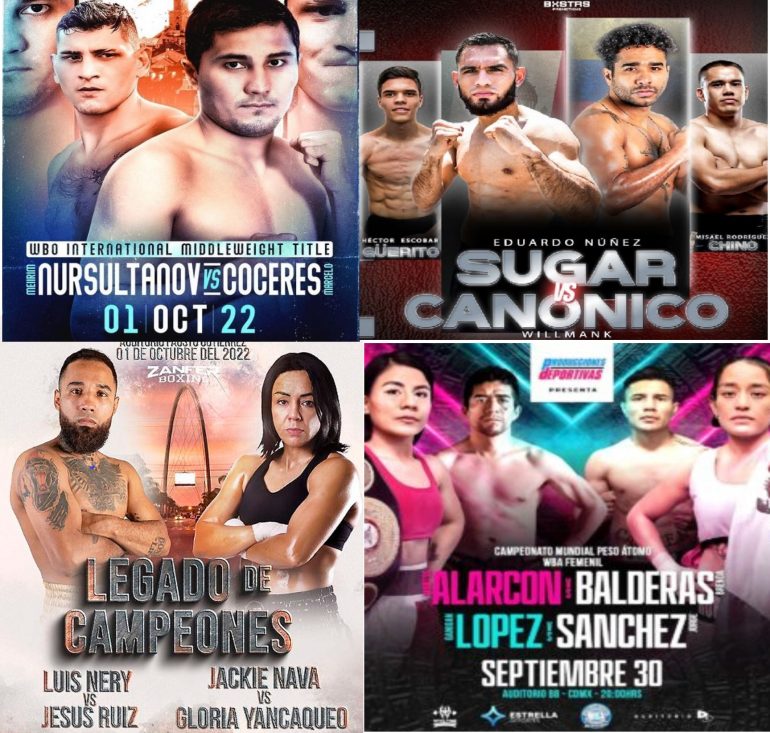 A rare opportunity to see the best atomweight fighter on the planet. Alarcon has topped the Ring ratings in boxing’s lowest possible weight class, and she will probably continue holding that position after this fight.

Two tough fringe contenders putting it all on the line in a fight to keep their careers alive. Should be one of those hidden gems of the entire weekend.

“Sugar” Nuñez is an unbeaten KO artist from the hotbed of boxing that is Los Mochis, home of dozens of champs and contenders. That’s all you need to learn to know that this will be interesting, and to top things off he’ll be facing fellow heavy-fisted once-beaten KO artist Brito, from Venezuela. Expect fireworks.

Yes, the grandson of the “Teflon Don” himself is making his debut in the legalized hurt business after a 5-1 career as a martial artist. Should be a fun career to follow!

The always dangerous and upset-minded Coceres travels to Poland to put the unbeaten Kazak prospect to the test in what could be one of the best matchups of the weekend.

Unfortunately, the entire event had to be cancelled after the brutal murder of Hernandez-Harrison’s father Buddy earlier in the week. Fighters such as Greg Outlaw Jr., Anthony Peterson, Suleiman Segawa, Eric Hernandez and DeMarcus “Chop Chop” Corley were expected to see action in this card that has now been postponed with no new date being announced yet.

The supremely talented “Panterita” takes on last-minute replacement Carmona in what we all hope will be another step towards the kind of challenges that his great skills truly deserve.

Standing ovation, everyone! A legend bids farewell. Nava is a trailblazer in women’s boxing and an icon in Mexican boxing, a superbly fit and dedicated fighter who gave us years of terrific fights. You will be missed, campeona!

“Little Lulu”, sister of legend Mariana Juarez, will be attempting to defend her WBC belt for the fourth time against a more-than respectable opponent.

Muñoz, one of the most distinguished fighters in the lower weights for years, will try to shake off her recent loss to Denmark’s Dina Thorslund by taking on Chiwandire (whose colorful nickname is “Take Money”) in her backyard.

Ah, yes, the new monthly installment of “Big Baby’s” barnstorming comeback tour. This time we travel to exotic Kazakhstan, where Miller will take on Ghana’s once-beaten Tetteh, a foe with a respectable 81% KO percentage, who should provide a slightly stiffer test than Miller’s previous two opponents in this new, post-suspension part of his career.